With margins feeling the pinch of galloping labor costs, colleges and universities are conceptualizing their spaces to maximize on throughput, cut down labor and reduce food waste. Check out the design secrets for maximum profit from these three top universities. 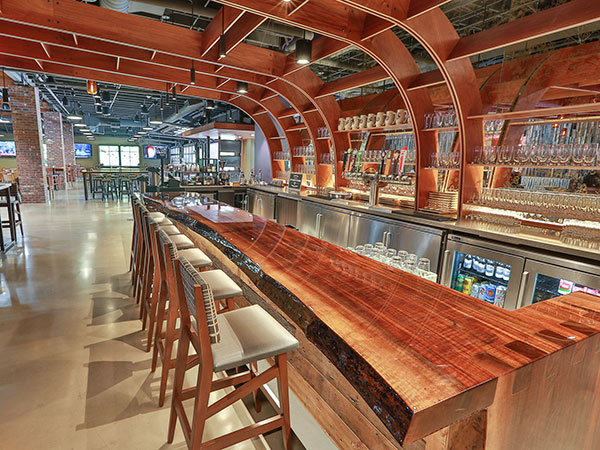 Pilot House, the University of Portland’s on-campus pub, turned a low-traffic dining area and lounge into a space to recapture off-campus students for the late-night segment. The transformation took a bit of reclaimed wood, a heated patio and a splash of booze. “It feels like every restaurant here in Portland,” says Kirk Mustain, general manager of the Oregon university’s Bon Appetit-run dining services.

When the university took note of the lack of late-night programming for students—some off-campus students walk 15 or 20 blocks for entertainment—it decided to build a multiuse space where students, faculty and the public could gather. UP already held a full liquor license for catering, but serves only beer, wine and cider at Pilot House, which opened last fall. “Beer is a secondary component to our restaurant,” Mustain says. “We created an environment for responsible drinking.”

To conserve space in the 4,800-square-foot pub, Pilot House stocks small-batch kegs known as sixtals and hosts tap takeovers with more than 200 microbreweries. A 280-foot heated patio sectioned off by a garage door adds 120 seats.

By day, the pub morphs into an espresso cafe, but most of that machinery is below the bar, so it’s not a distraction when Pilot House changes into its evening wardrobe. In addition, a retail operation, Mack’s Market, packs ready-to-eat fare such as antibiotic-free rotisserie chicken, pasta bowls and Spam musubi into a 600-square-foot area near the back of the space. 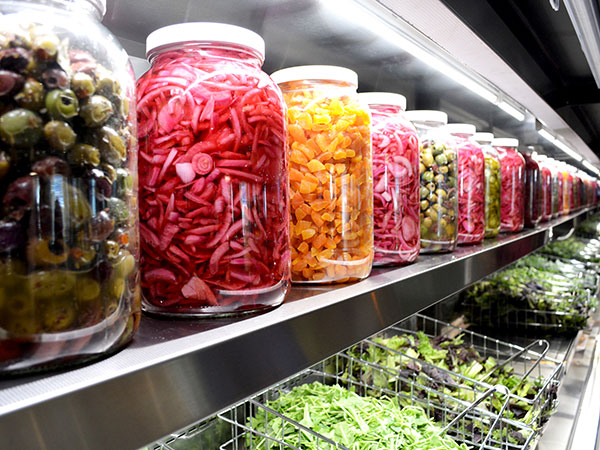 In the fall, Yale University’s Cafe Med increased throughput compared to the location’s last concept, while methodically cutting labor by half and the footprint by two-thirds. “We gave back space to the medical school and the university, and said, ‘You can take this for whatever you need,’” says Adam Millman, Yale Dining director of auxiliary operations.

The scaling-down process started with outsourcing food prep to a centralized kitchen, then looking at labor and sales by daypart. In the morning, where most sales consisted of coffee, pastries and house-made oatmeal, Millman and his team have gotten creative to reduce labor. “We had to make [guests] feel like they are in the space without entering the space,” he says. “If they start entering the space, we just added the potential for more labor, because then they will start touching things or spill something on the floor.” Indirect seating outside the facility took the place of in-cafe seating, and an express entranceway counter with a sliding barn door and glass walls help customers feel like they’re sitting inside. When lunch service begins, the glass wall slides open, employees shift to the inside counter and customers are welcomed in.

The design factors in not only the amount of required labor, but also the cafe’s needs during low-concentration dayparts. By connecting the custom salad station to the hot stew station and coffee bar, employees can quickly move between three spaces without running into each other. Stations are stocked via an 8-by-8 glass door walk-in next to the service counter, which can also be accessed from the storage area. “It created efficiencies for them and less movement, but it also allowed us to create some sort of visual art of the food,” Millman says.

Looking at all possible efficiencies, Millman’s team coupled design elements with a strategic traffic pattern and queue space—and just a touch of school spirit. A Y-shape divider resembles the Yale emblem and creates a natural barrier, padded with impulse buys, for customers to line up around. Sterling College, a hands-on work college in Craftsbury Common, Vt., has extended the life of its produce used in foodservice from three days to three weeks with one 432-square-foot washhouse.

The college, which boasts a curriculum geared toward environmental stewardship and sustainability, has an agrarian program that produces 20 percent of the vegetables and 16 percent of the meat served at the school’s dining hall. For the past five years, enrollment has been growing, and the college has strengthened its commitment to grow more and more food.

“We reached a critical tipping point where we needed to have a more effective and innovative way of cleaning and cooling vegetables,” says Gwyneth Harris, Sterling’s farm manager.

In the past, the washing facilities merely housed a couple of wash tanks and tables. Sterling students built the new washhouse, even harvesting the lumber from the college’s grounds. The building is designed to shorten the distance and time it takes to transport produce from the gardens to the kitchen with access doors to hoop houses, different doors to the fields and exits where workers can load trucks headed to the kitchen.

This summer, when Sterling’s budget turns over, Harris plans to install receiving tables, mesh tables, wash tanks with soaking capabilities and industrial-size salad spinners. She says she is most excited about the reduction of labor that will come from a new motor-driven rotating cylinder washer, which will clean root vegetables. “For root crops, it’s probably going to decrease our labor by at least 50 percent, maybe more,” she says.

With containers that have the dual purpose of transport and storage and the installation of walk-in coolers, Harris hopes to be able to reduce food waste. “If it is a hot day, our greens and things might be out in the hot weather for an hour or more,” she says. “This will allow us to cool things within the first few minutes after harvest, which has a huge impact on shelf life—and also on flavor.”