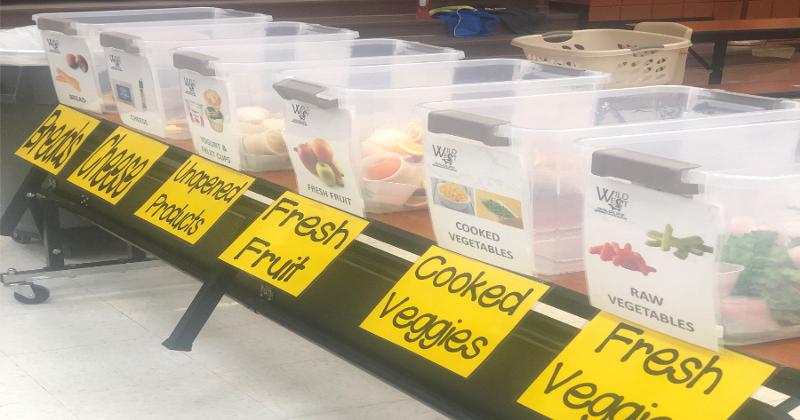 When the pandemic forced share tables to be removed at Arden Road Elementary in Amarillo, Texas, the Chartwells K-12 nutrition staff found themselves with extra food on their hands.

The problem was quickly solved when a foodservice associate suggested donating the leftovers to local animals. The team reached out to nonprofit Wild West Wildlife Rehabilitation Center, which was more than happy to take the food and use it as animal feed.

“Instead of just throwing the leftover food away, we found an innovative way to save this food from the landfill,” says Resident Dietitian Halley Holloway. “So, this was just one way that we were able to adapt and respond, and we were able to turn a challenge into an opportunity.”

Setting up a food rescue program

Since its launch in January, Arden’s “No Stinkin’ Food Waste” program has diverted nearly 2,000 pounds of food to the center, which is able to take donations of fresh fruits, fresh and cooked vegetables, yogurt, fruit cups, bread and cheese.

Using a grant from the Walmart Foundation, the school purchased separate bins for each food type and set up a food rescue station in the cafeteria. When finished with their meals, students sort leftover items and place them in the corresponding bins.

At the end of each day, fourth-graders who are part of the school’s leadership team record the weight of the donated food and track how much has been donated over time. The following morning, a representative from the center comes to the school to pick up the donation.

Before the program started, the nutrition team and representatives from Wild West Wildlife visited classrooms to educate students about food waste and the rehabilitation center. Students were also able to meet some of the animals who live at the center, including Stinkers the Skunk, who inspired the program’s name.

“That was something really special, that the kids could see the animals and who they were going to be donating their food to,” says Holloway.

Students have met the program with a lot of excitement, says Director of Marketing Vlada Buck. When it launched, the school’s principal even had to remind parents and kids early on that the goal was to first feed the students and then the animals.

“When we first implemented the program, we did not anticipate the students would be so eager to contribute that they were willing to purchase more fruits and vegetables and even donate before eating the items themselves,” says Buck. “Even the students that will bring in stuff from home, they were trying to share half of their lunch before they even sat down.

Students have now settled into a routine, says Buck, and they understand that they should eat first and then donate if there is anything leftover.

While share tables will be back after the pandemic subsides, the district plans to keep the program going. “We still see a need for donating some leftover food items, especially items that are half eaten, like a half-eaten piece of fruit, that can still be donated to the wildlife center,” says Holloway.