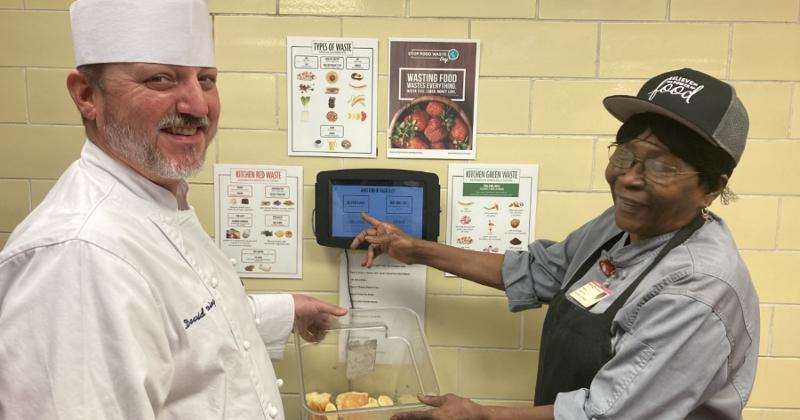 In 2015, Compass Group launched Waste Not, a web-based tool that allows kitchens to track food waste at each station.

“By tracking at the station level, it really was allowing kind of that awareness as to where food was being wasted in our kitchens,” says Amy Keister, SVP of sustainability and culinary for Compass. “And then by knowing that awareness, [staff] are able to take action and create a plan to change the behavior to reduce food waste.”

Data from Compass shows that Waste Not has helped cut food waste by 33% across its U.S.- based cafes using the program over the past year. Now, the foodservice management company hopes to build on that success with the release of Waste Not 2.0, a new and improved version of the program.

Unlike its predecessor, Waste Not 2.0 has fully embraced the digital format.

“The original that was introduced to the units was a little bit cumbersome as far as the execution, and there were there were a lot of handwritten documents that had to be filled out by staff members,” says David Topping, system executive chef for Morrison Healthcare at Roper St. Francis Hospital in Charleston, S.C.

Waste Not 2.0’s tablet-based format has been easier for staff to learn since they’re familiar with digital technology, Topping says. Data from the app can also be quickly transformed into bar graphs, pie charts and more to showcase the difference staff is making in real time.

“Being able to see their impacts right off the bat or quickly thereafter is a very positive thing, and I think [staff] respect it and they enjoy knowing that they're making an impact,” says Topping.

Waste Not 2.0 also focuses on identifying avoidable waste such as leftover food rather than smaller amounts of waste created while prepping and cooking. “We'd much rather be spending our time focusing on that extra sheet pan of lasagna as opposed to worrying about bones, trims, or, you know, the pits of an avocado,” says Keister.

At Roper St. Francis, Waste Not 2.0 already identified a major waste-reduction opportunity for the team.

“One of the problems we had was over-prepping of product based on the patient count and what this did was help the prep cooks focus on the actual items needed versus what they thought was needed,” says Jeff Lentini, director of food and nutrition services for Morrison Healthcare.

Since implementing Waste Not 2.0, the hospital has seen a 45% reduction in food waste.

The pilot phase of the new program recently wrapped up and has been a success, says Keister. Compass has plans to expand it to several sites over the next month and is hoping to quickly grow to more locations as the year continues.

“We have an aggressive rollout to get the majority of our kitchens up and running by the end of [2022],” Keister says.