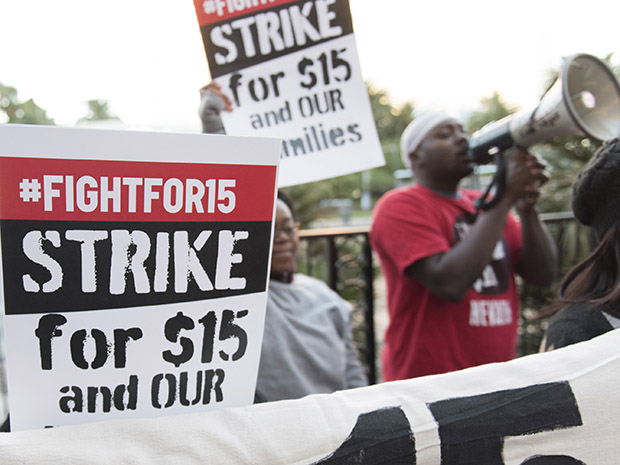 The highly reported images of workers hitting the streets in protest of low wages may also soon include hourly noncommercial foodservice employees, as they too are being urged to walk away from their jobs to protest insufficient pay.

Those that do are joining forces with those restaurant employees, whose efforts are backed by Fight for $15, an advocacy group that’s calling for increased unionization and higher wages.

Striking workers is nothing new. But what is new is the scope of this action. In early October, fast-food workers in Michigan rallied for their cause, just days after retail behemoth Amazon declared that it would raise minimum wages to $15. This move includes Whole Foods’ employees, which Amazon purchased last year for $13.7 billion. As with most things Amazon does, the raise in minimum wage at the company sets a precedent for other employers.

More protests were expected in states including Georgia, Connecticut and California. Fight for $15 plans to follow the protests with a lobbying blitz in 11 states.

Meanwhile, last spring, thousands of workers at the University of California in Los Angeles, including foodservice staff, staged a three-day strike with the goal of increasing wages, in addition to working to improve their health coverage.

The walkouts brought widespread disruption to dining services, as they did two years ago, when employees at Harvard University went on strike, urged by their union, Local 26.

The first five states are the most difficult states to bring about change in, he says, but once you get to the 10th or 15th state, “the ball is rolling downhill. It’s really difficult to get those first wins but once groups do, the momentum is on their side.”

Fight for $15 “has made a difference,” he says, and he expects that to play out in all areas of foodservice.

Joe Mullineaux’s hands are tied when it comes to pay increases. He is the senior associate director of dining at the University of Maryland in College Park, a self-operated campus with some union employees. Pay raises, he explains, are determined by the governor’s office. So the union negotiates with that entity.

What union members are most concerned about, he says, are equity and distribution of pay, campus parking rates and protecting the jobs of people who could be affected by changes in immigration rules.

What’s contentious is whether the governor believes in COLA (Cost of Living Adjustment) raises or merit-based increases. However, says Mullineaux, “whatever the governor approves, we have to generate the income for it … and it doesn’t matter if we’re having a great year or a bad year.”

And that can be frustrating, he says, “because you could be having a great year and would love to give everyone a raise. So we’ve established a working environment based on respect.” This includes, he says, holding surveys to find out how to improve employees’ working conditions and nominating foodservice staff for the Campus Outstanding Service Award.

All employees at Geisinger Health System, Danville, Pa., received their second pay raise in three years this summer when the minimum wage there jumped from $10 to $11, a difference of around $800 a year for most employees.

“It was strategic. Unemployment is low so we need to do what we can to attract people to these positions,” says Bruce Thomas, vice president of guest services. “We have to make sure they’re getting a fair wage for their jobs and we have to compete in the market.”

All employees at San Diego Unified School District are union employees. Though they just received a 2.5% raise from the Board of Education, making the minimum wage $15, their director of food and nutrition services, Gary Petill, isn’t in the position to offer them more money. He focuses instead on keeping them happy in their jobs.

At the beginning of the school year, he holds an open house so parents and kids can meet foodservice staff, taste meals and ask questions. He has a quarterly breakfast for nominated exemplary team members in each of his 20 prep kitchens. He gives shout-outs to each of his 210 schools when they pass a health inspection. And he empowers each school’s team by letting managers come up with specials.

At Robert Wood Johnson University Hospital in New Brunswick, N.J., the staff is a combination of union and nonunion employees. “The only major difference is that as a management team, we cannot fight for a raise [for union employees] because that comes from the upper echelon of the hospital,” says Jill Wedeen, assistant director, food and nutrition department.

“But it’s not just about the money. It’s about the work environment. It’s about being respected and having management treat everyone in the same manner,” she says.

To this end, she, like Petill, works hard to keep her staff engaged. During Healthcare Foodservice Workers Week in October, for example, she holds a special celebratory evening of dancing, dining and entertainment, inviting five team members, who have done outstanding work in the past year, from each hospital in the system.

“It’s all about celebrating them and how they work very, very hard,” she says.

Senate confirms Tom Vilsack as next U.S. Secretary of Agriculture