Workers at hospitals, colleges and universities, and airports are being urged by union advocates to walk off their jobs this week in a show of support for organizing cashiers, cooks and other employees of quick-service operations. 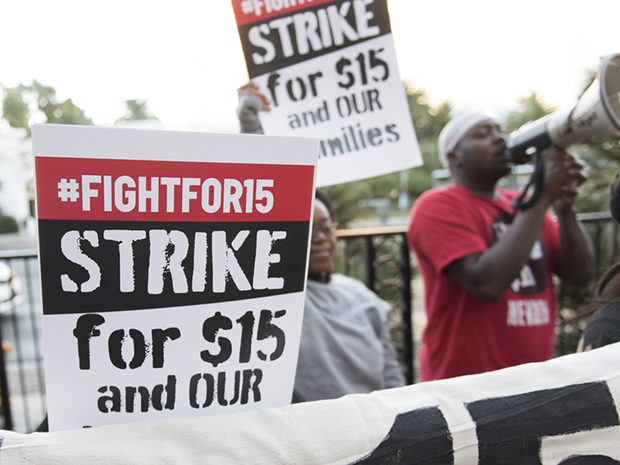 Although the aim of the mass demonstration is increasing the unionization and wages of hourly workers at national chains like McDonald’s and Burger King, organizers say they will ask service industry employees nationwide to join the job action in a show of sympathy. The coordinators, a union-backed advocacy group called Fight for $15, are specifically targeting employees of higher education facilities in Florida, child care centers in California and everyone employed at a major healthcare center in Pittsburgh, the University of Pittsburgh Medical Center.

Airport workers are also a focus. Fight for $15 says it expects contract service workers at some 40 airports worldwide to participate.

The demonstration is intended to be a rolling action lasting for three days, starting Oct. 2 with walkouts in Detroit and Flint, Mich.; Milwaukee; Chicago; and airports everywhere. The focus will then shift to facilities in Georgia, Connecticut and California, with a strike Oct. 4 at Pittsburgh’s large health center.

Fight for $15 said it will follow the job action with a “massive” lobbying blitz in 11 states. Thousands of workers will be asked to knock on doors and call voters in a bid to bolster support for pro-union candidates at the local, state and national level.

A prime backer of Fight for $15 is the Service Employees International Union, the usual representative for organized foodservice workers.

Fight for $15 is a coalition of groups and advocates pushing for a minimum wage of $15. Its member groups include church groups and organizations combatting workplace sexual harassment.