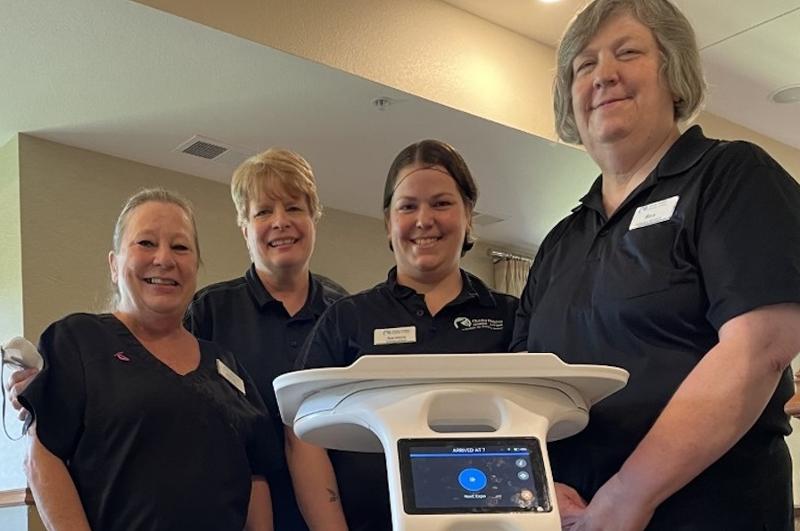 Chaska Heights, a Lifespark Senior Living Community in Chaska, Minn., brought Rosie on board, and Providence Point, a Baptist Senior Family Community in Pittsburgh, Pa., added Tipsy and AnneDroid to the employee roster. The robots were named by the residents at each community.

“Our accounts were struggling to retain labor and keep our dining rooms running efficiently,” said Bill Dalesandro, district manager for Cura Hospitality in Pittsburgh. “We saw a demo by Bear Robotics in February and thought the robots could help.”

With a 1.1% unemployment rate in Minnesota, where Lifespark is located, the workforce is sparse, says Cura Dining Director Timothy Henning. At first, his staff objected because they thought Rosie would take jobs away from people. But she is actually enhancing the environment, he says.

“There’s no way she can replace people,” he explains. “She has no arms and can’t take an order or provide customer service.”

What Rosie can do is help servers focus on hospitality instead of more menial tasks like running food and bussing tables.

“We programmed her with a schematic of the dining room so she can maneuver around obstacles,” says Henning. “The staff can load her up with plates of food, and she can go to multiple tables. But the food is taken off and placed on the table by staff.”

Rosie wiggles a little too much to carry bowls of soup, he adds, so that is still a server’s job.

After meal service, a team member loads Rosie up with dirty dishes from multiple tables, and she goes back to the dish machine where they’re unloaded. In total, she takes care of 26 tables in three dining rooms, saving countless human steps. 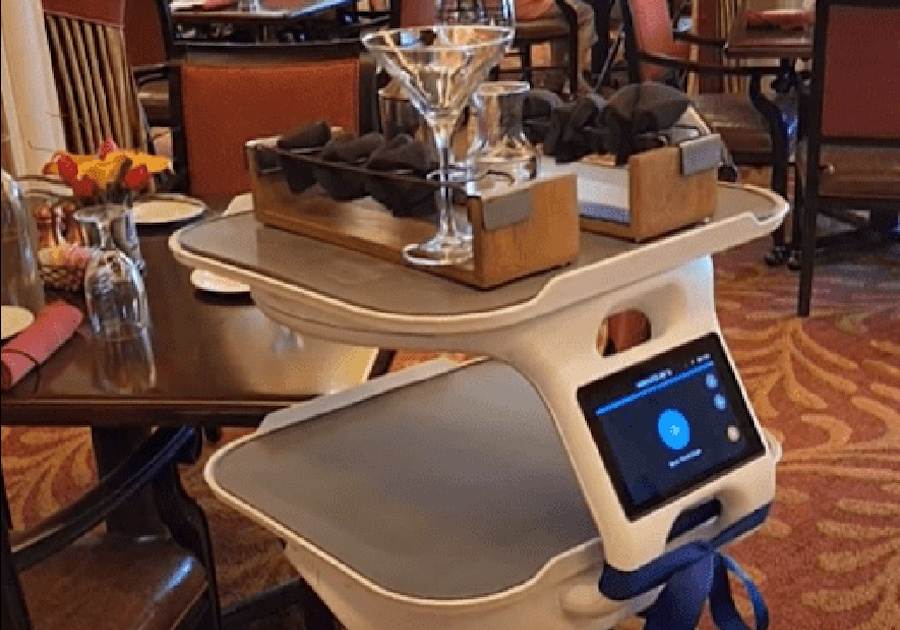 The two robots working at Providence Point are rented for $899 a month, says Cheryl Torre-Rastetter, Cura director of dining services at the senior-living community. Each saves about $23,000 and can run for 14 hours before needing a charge.

Tipsy acts as an assistant to the host, escorting up to 400 residents to their seats during lunch and dinner service. She also can take cocktail orders, go to the bar to pick them up and take the drinks to the table.

“At first, the drinks were rolling around like she was on the Titanic, but we programmed a smoother path and the cocktails arrive without spilling,” says Torre-Rastetter. “We employ many teenage servers here. Since they are underage, they can’t serve alcohol, so Tipsy really helps. She also frees up the manager from running to the bar for drink orders.”

AnneDroid is dedicated to the food side and is programmed with meal orders for each table. She delivers the food, holding up to eight covered plates at a time, and can also bus the tables—both with human assistance to load and unload.

“This allows the servers to be out taking care of guests and results in better customer service,” says Torre-Rastetter. “At first, the [teenage servers] didn’t like it but now they do.”

The residents at both communities, on the other hand, were early fans. The robots take some of the stress out of servers’ jobs, resulting in speedier service and more time for hospitality, Cura says. They are even programmed to say “hello” and sing “happy birthday.”

Included in the robots’ purchase or rental fees is staff training and some maintenance. “The cost should come down for Cura, as we’re planning to add the robots to four or five other facilities,” says Dalesandro. “So far, it’s a win-win.”