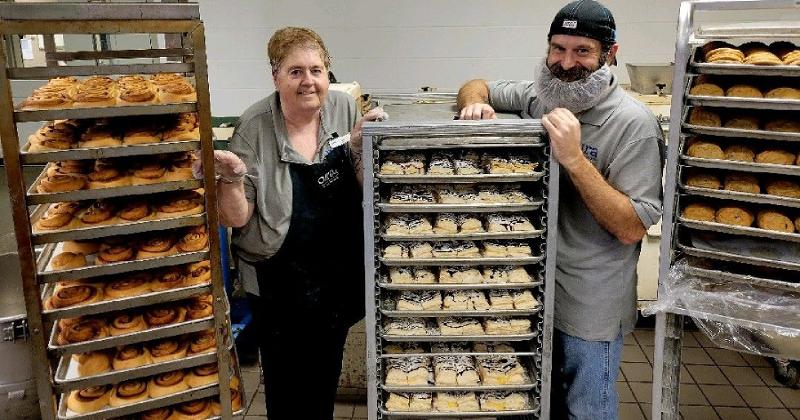 Bakers June Fitch and Bryan Ross with the many breads, cinnamon rolls, cookies and Napoleons the kitchen turns out. / Photo courtesy of Cura Hospitality

The South Dakota Human Service Center in Yankton, S.D., turns out 8,000 meals a week with a staff of 43—32 of whom are inmates from the prison next door.

All 32 of those inmates are men, and they can only work at the center for a few months before another group rotates in. That means a lot of interviewing, training and onboarding for Tina Flood, general manager for Cura Hospitality. The center is under Cura’s management, providing meals to both the Yankton Minimum Security Unit and the Human Services Center, a mental health hospital.

“I couldn’t do it without my inmate staff,” says Flood, who worked in both foodservice and law enforcement prior to this position. “It’s a little overwhelming at first to see all the guys in orange working in the kitchen, but they work hard and mesh well with the team.”

A lot of that is due to Flood’s interpersonal skills and onboarding process.

“I make sure each of the inmates feels ownership and pride in the work that they do,” says Flood.

She begins with a tour of the facility with every potential hire, which provides an appreciation of its massiveness and a feeling for the working atmosphere. Then Flood asks them what they liked and didn’t like about their former jobs, pre-incarceration. One of the pre-requisites for working at the center is some prior kitchen experience, and that question gives her a better idea of placement.

“If someone applies to work in the bakery, but I think they’d be better off in the cafe, I steer them there,” she says. “I tailor the person to the job.”

Each inmate must go through an extensive background check by both the Department of Corrections and Elior, parent company of Cura. “They also have to abide by the Cura Code of Conduct and sanitation rules,” says Flood. “I teach them the food handler safety course as part of their orientation.”

The inmates are allowed to be paid only 25 cents an hour, but they also get EDC (Earned Discharge Credit), which can go towards educational, vocational or rehabilitative programs. The biggest benefit—they get to eat more food here than in prison.

“The inmate staff is not allowed to get presents, but I can throw a pizza party for them, cook a batch of cheeseburgers, bring in buckets of KFC or have the baker make extra cookies,” says Flood.

The culture she creates makes the Cura employees feel comfortable with and protective of the inmates, she adds. And Flood extends extra doses of hospitality and recognition to the Cura staff as well.

It starts with what she calls “stay interviews”—one-on-one meetings so she gets to know each of the employees personally.

“I ask them how they like to be recognized, what their favorite colors are, even what candy bars they like best,” Flood says. Parents of young children are given flexible schedules, if needed.

In recognition of Healthcare Foodservice Workers Week, which takes place next week, she ordered bluetooth speakers for each Cura employee, printed with the phrase “Foodservice Strong.” And after a particularly tough couple of weeks, she presented each staff member with a succulent plant attached with a note that said “Thanks for sucking it up.”

The hard work by this small team is evident in their productivity. The South Dakota Human Service Center has the largest commercial kitchen in the state, and in the bakery alone, three team members bake 2,450 loaves of bread, 400 caramel cinnamon rolls and 7,000 cookies every week, as well as dinner rolls, cakes, muffins and even Napoleon pastries filled with custard.

Being around food and cooking makes people happy, Flood believes. But what differentiates this foodservice workplace is her steady positive feedback and recognition that each team member is unique.

“I treat my employees like plants,” says Flood. “Some need more sun and light and others can be put in a corner and thrive.”