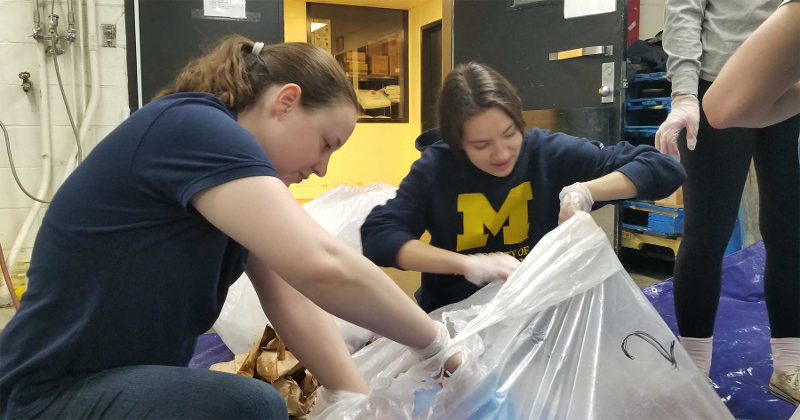 Photograph courtesy of the University of Michigan

Last March, student sustainability leaders at the University of Michigan in Ann Arbor spent two evenings going through more than 1,400 pounds of waste at Bursley Dining Hall as part of an audit conducted in partnership with Michigan Dining and nonprofit group Net Impact.

The audit, which would help determine whether recent composting initiatives at Bursley were successful, covered recycling, compost and landfill waste produced in the back of house as well as post-consumer compost from uneaten dishes. (Front-of-house recycling was excluded due to students using reusable plateware.)

Audit participants found that the time and energy spent on instructional and promotional efforts around composting had been worth it: Almost 96% of items at Bursley were composted correctly.

One reason for this success? Proper education, along with taking advantage of students’ skill sets, says Keith Soster, director of student engagement and sustainability for Michigan Dining.

“It’s important to utilize the talents of the students,” he says. “Their voice is loud, and they have much ownership in our campus. Many already understand the implications in regard to environmental sustainability and how it will impact everything else.”

At Bursley, having visuals has helped students understand the how and why behind composting, University of Michigan Sustainable Food Program Manager Alex Bryan says. After finishing their meals, students physically scrap plate waste into recycling, compost and landfill bins. This is different from other campus dining halls, where students place their used dishes on a conveyor belt and don’t see waste being separated by kitchen staff. 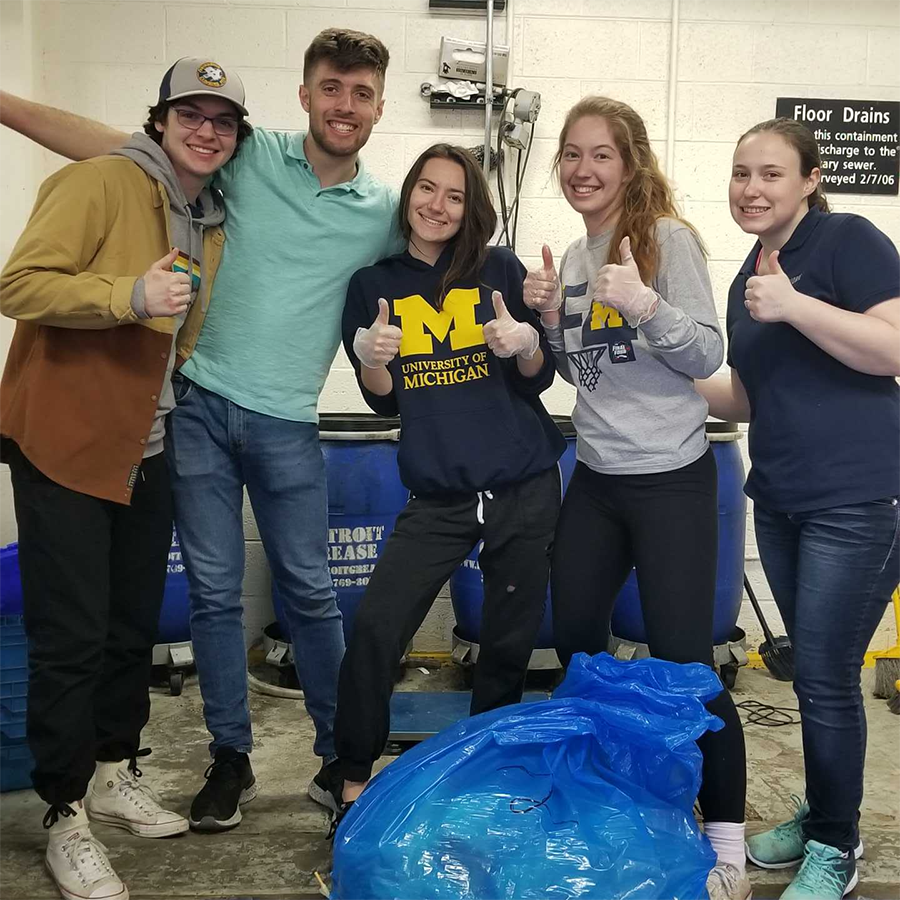 Photograph courtesy of the University of Michigan

Education is essential to getting buy-in from employees, who receive composting and sustainability training during their onboarding, which is reinforced in smaller training sessions and team huddles throughout the year.

However, the most impactful way to get staff buy-in, Bryan says, is from the student body at large: “If the students are really excited about composting, or if they are composting in their residence halls, that tends to bleed over into our staff and faculty across campus.”

Setting up for success

As the university continues to make gains around its sustainability goals, it’s also making the most of talents on campus. Marketing students, for example, are helping to create promotional materials advocating for recycling and composting, while a group of student techies are developing a mobile app that would tell users whether an item belongs in compost, recycling or landfill using their phone cameras.

Engaging students in sustainability efforts on multiple levels has been essential, Bryan says.

And once students are involved, the rest of the university community soon follows, Soster says. “You’ll find that if you elevate students in the planning and implementation, you’ll have a higher adoption rate among students and staff that will have a hard time saying ‘no.’”

Due to the success of Bursley’s compost initiatives, each residence hall will have a composting option by fall. As many as 500 compost bins will be placed inside University of Michigan residencies, requiring training for custodial staff and others.

It’s important to utilize the talents of the students. Their voice is loud, and they have much ownership in our campus. —Keith Soster

While Bryan says it is a “pretty ambitious project,” getting students to properly separate and dispose of waste early in their college careers will hopefully help them develop habits that will continue through graduation and beyond.

“Everyone lives on campus their first year,” he says. “So by the time they’re in their fourth year, all students will have engaged and seen the compost, recycling and landfill bins and participated in that process, which then should allow us, in about four years, to pretty seamlessly roll out compost to the rest of campus.”