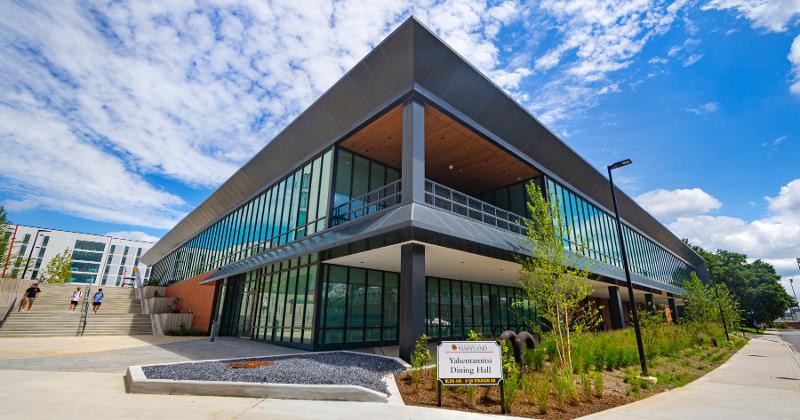 The name Yahentamitsi translates to “a place to go eat." / Photos by John T. Consoli at the University of Maryland

For the first time in nearly half a century, the University of Maryland has opened a brand-new dining hall.

That hall, named Yahentamitsi, pays tribute to the Piscataway people, the Native American tribe that formerly occupied the land the university was built on.

Additionally, the university posted the land acknowledgement on the outside of the building so that visitors can see it as they come and go, said Bart Hipple, assistant director of marketing and communication for the university’s dining services.

“We went and worked with the Piscataway to talk about what they might like to really enhance the land acknowledgement, since we were building this Heritage Community,” said Hipple.

The name Yahentamitsi, which translates to “a place to go eat,” was developed through collaboration between the University of Maryland and the Piscataway people.

“We really didn’t know what the building should be named. Do we want to name it the same as the old building it was replacing? Did we want to name it something else iconic to the state of Maryland?” he said. “But then when it became clear that this was going to be in the Heritage Community and our new vice president of student affairs was very attached to the Piscataway tribe and the land acknowledgement and making sure we included everybody in our campus.”

Hipple noted that students were involved in the naming process as well. 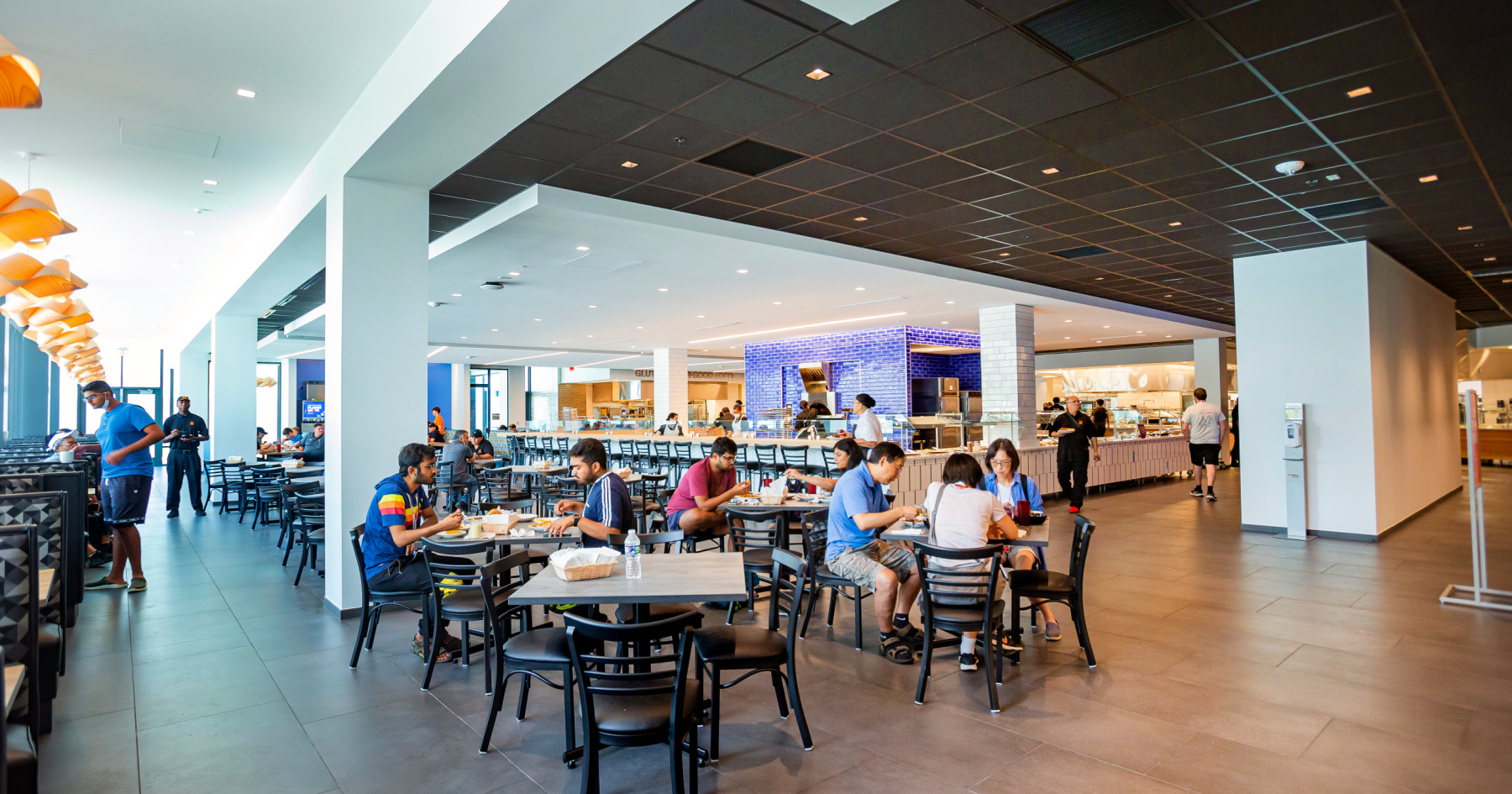 After much deliberation, the university finally came to an agreement on the name.

Yahentamitsi honors the Piscataway people in more ways than one. In addition to its name, the dining hall is decorated with Piscataway art and other narrative pieces that seek to showcase the history of the people.

On the lower level of the building, guests can find a timeline of Piscataway history, detailing the tribe’s personal background as well as its history of treaties with the United States. The timeline is called “We’re still here.”

Hipple describes the timeline as being similar to those found in museums. “[It’s] talking about the Piscataway journey from before Europeans came to this country to now and where they stand now,” he said.

Other art pieces give nods to the Piscataway people by incorporating elements that are significant to them. For example, once upstairs, guests will notice pictures of shad, a food source for the tribe. 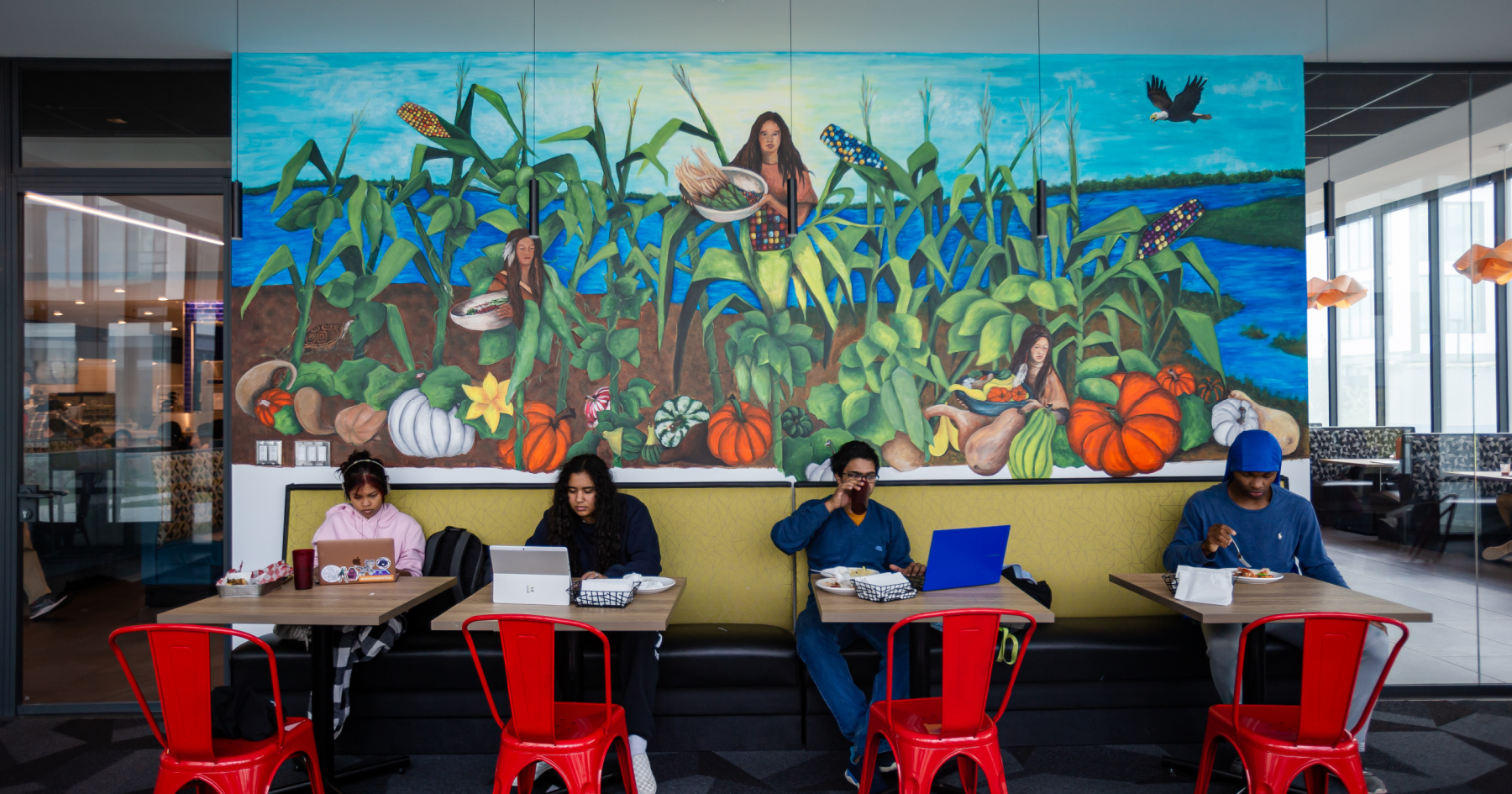 The mural of The Three Sisters.

The wall art also incorporates a map of the Chesapeake Bay and points out where Piscataway locations were along it.

One unique feature of the new dining hall is its quiet room, a room for students who are focusing on schoolwork or simply desire a quiet lunch. On the wall of the quiet room is a mural of The Three Sisters—corn, beans and squash, the three main crops of many North American indigenous tribes. The mural was constructed by a Piscataway artist.

Yahentamitsi is home to 11 service stations with a variety of menu options on offer. When first walking in, guests will notice a large salad bar stocked with fresh produce. Students can also opt for fresh smoothies or housemade soups and chilis.

Another station features a ceramic pizza and pasta oven that works over an open flame. It serves Mediterranean specialties with Greek, Turkish or North African origin, and also features counter seating where guests can sit and watch the food get prepared. 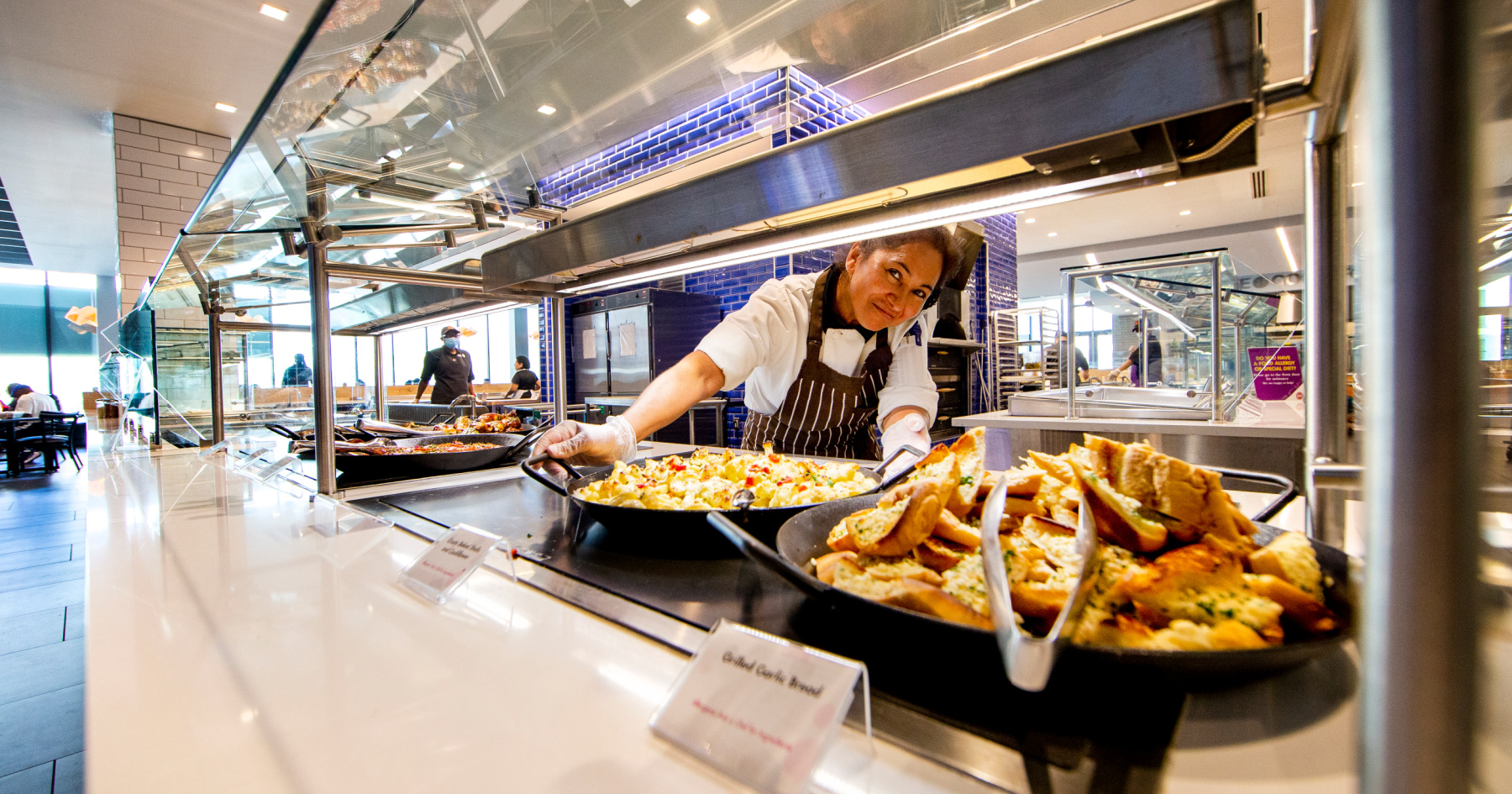 “Counter seating is very popular. Students will sit there and talk with each other and sometimes chat with the cooks behind the line,” said Hipple. 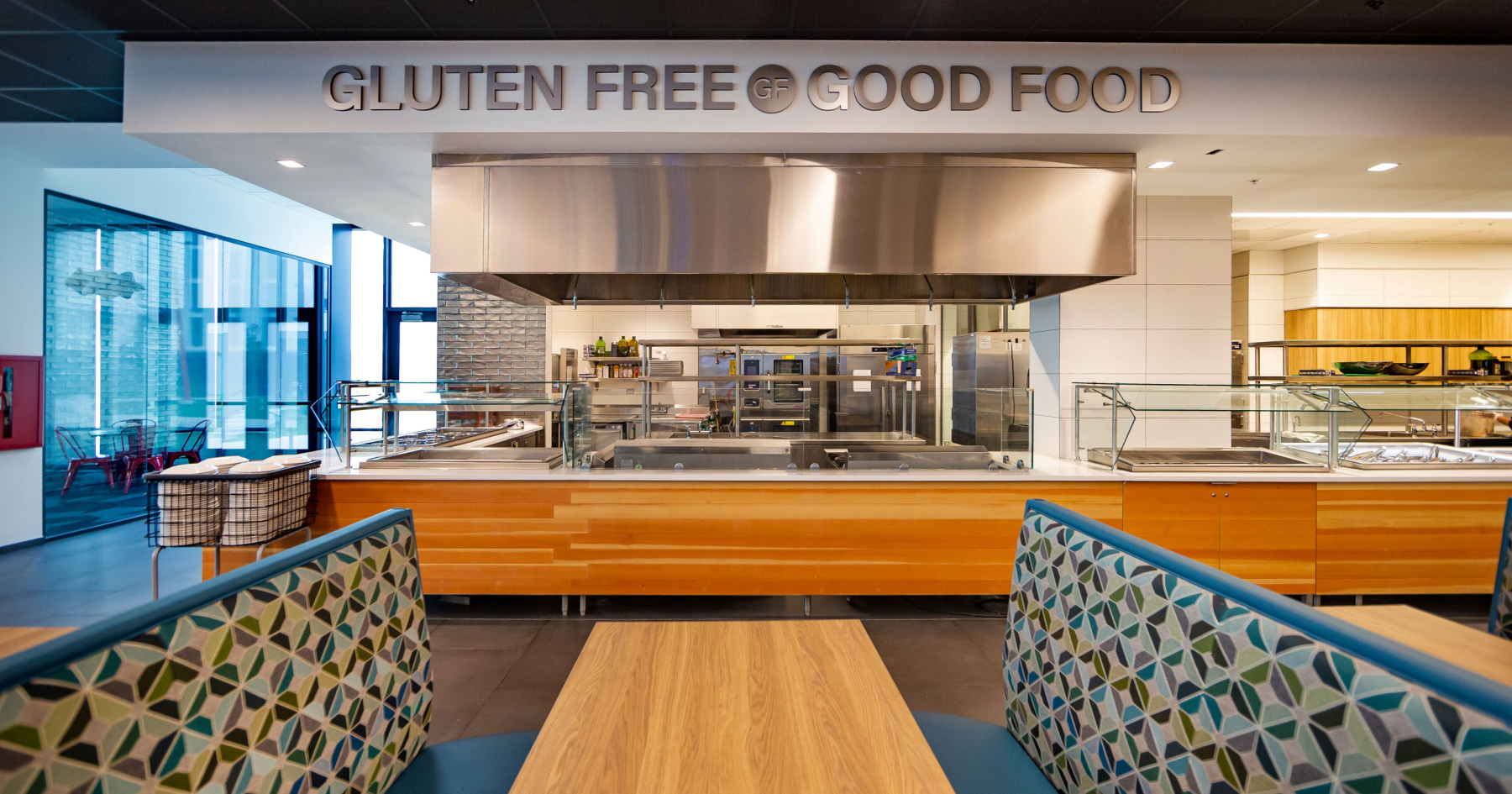 Another concept, Chefs Corner, allows the culinary team to experiment with new recipes that haven’t made it to the menu yet.

“We kind of evolved into this space where we needed a way to explore new menu items and new recipes. And have students actually try them, rather than just you know, trying it out on each other,” said Hipple. “And so, we established a very casual Chefs Corner in one of our existing dining halls. And it was such a success that we decided to expand it and actually have it as a feature of Yahentamitsi.”

Additionally, Chefs Corner features foods derived from Native American cuisine, which use local ingredients as much as possible.

“As much as we can, we [in dining services] are looking to source sustainable food and local food whenever possible,” Hipple said. “And we thought that moving into the Heritage Community with the Yahentamitsi dining hall was a great mix and a great message for that,” Hipple said.

Other stations include an all-day breakfast concept and an Asian eatery where customers can create their own stir-fry dish. Toward the back of the dining hall is Joes Grill, a micro-restaurant inspired by sports bars that serves sandwiches and burgers, and a bakery outpost features fresh cookies, muffins, croissants, cakes and pies.

Yahentamitsi opened in August of 2022, and Hipple says student feedback has been positive so far.

“[Students] walk in and they just go, ‘Woah look at this, am I on a college campus?’” he said. “We have noticed that students are getting pulled from the other two dining halls into this dining hall. And we’re working hard to make sure that all three dining halls provide a great dining experience.”