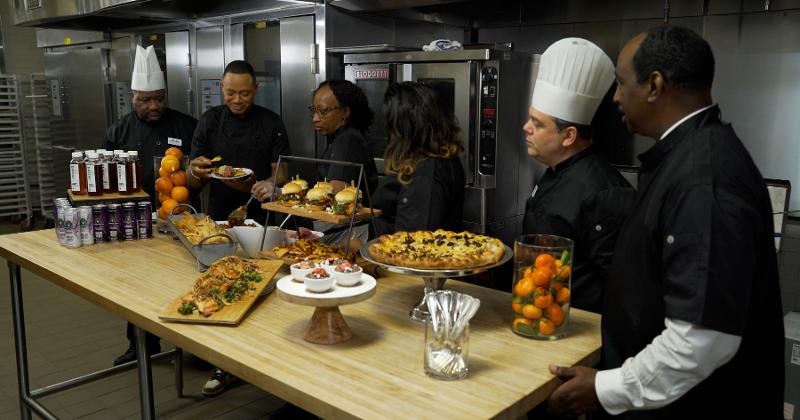 “I saw his energy with the students and how they were captivated by him speaking,” says Grice, senior director of business development for Elior North America, which runs Aladdin Campus Dining.

Grice was later introduced to Terrence J through a friend, and with an assist from some contacts at Thurgood Marshall, helped form a partnership between the actor and Aladdin to promote healthy eating initiatives at the HBCUs that Aladdin serves.

While COVID-19 has forced the partnership to go mostly virtual, the team has still found ways to engage students around healthier choices.

Most of Terrence J’s help so far has been endorsing and promoting the plant-based options at Aladdin’s new concept called Vegebond.

“[Vegebond] is a pop-up program that can be utilized in any of our dining establishments, and everything is plant-based,” says Grice. “So, when we started that program, it went hand-in-hand with what Terrence was trying to do.”

Aladdin arranged a photo shoot and tasting at Bowie State University in Maryland for Terrence J to try the menu items and shoot some promotional materials for the concept.

He was “blown away” by the dishes, says Grice, and the team started rolling out different promotional assets featuring him and Vegebond. So far, the student response to the partnership and the new plant-based dishes has been positive.

“Having him as that voice has really helped us to get that messaging out there, and we’re seeing a difference,” says Grice.

And it’s not just students who are excited by the partnership—faculty and other officials have shared how much they’ve enjoyed it as well.

“We get a lot of feedback from different institutions and our clients,” says Chris Butler, director of operations for Aladdin Dining. “They’re loving the interaction and are excited about when he might come on campus to get that message out to the students.”

Future of the partnership

Looking to next school year, Aladdin and Terrence J are talking about ways they can continue working together. As more campuses open and students return to in-person class, the hope is to have him visit more schools and talk to students face to face.

The team is also interested in expanding the partnership to include more HBCUs as well as other colleges and universities.

“We hope that it will be able to be placed in other institutions around the country, especially since there's a lot of Black student unions at every different institution,” Grice says. “The idea is to promote healthier dining, especially within the Black community, and however we can touch those individuals in the best way, we want to do that.”

When a renovation opening doesn’t go as planned

As Omicron fears wane for many, some colleges adjust dining protocols