At MenuDirections 2016, FoodService Director’s culinary conference, which wrapped this week, attendees headed home with plenty of operational pointers, handfuls of business cards and at least a few new terms to add to their culinary lexicon—most centered around healthier menus, a leading trend to come out of the conference. Here are a few that we overheard: 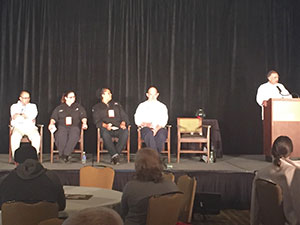 Speaker after speaker stressed the idea of plant-focused entrees as the future of foodservice, especially on the noncommercial side. Ron DeSantis, Yale University’s director of culinary and a member of FSD’s Chefs’ Council, used the term “protein flip” when he proposed applying more typical meat-cooking techniques such as charring and roasting to vegetables, and making vegetables the star of the plate. Jennifer Leamons, executive chef at Stanly Regional Medical Center in Albemarle, N.C., referenced the related phrase “meat on the side” for the same thing.

Another word to describe a focus on using or eating more vegetables, this term and others like it (“flexitarian,” “veganish”) seem to be a better description of where consumers are currently in their eating-better attitudes. More than a third are more likely to visit a foodservice operation that offers healthier options, according to Technomic, even if they don’t ultimately order those items.

As blended burgers merge onto menus for their health and cost-saving benefits, operators are experimenting with the ideal beef-to-mushroom blends that still deliver a meaty taste and texture. At Stanford University, Executive Director of Residential and Dining Enterprises Eric Montell says his team has pushed that ratio to about 80-20. Actually, it’s 20 percent beef, 78 percent mushrooms and 2 percent black-bean puree, as he disclosed during a panel on implementing the Culinary Institute of America’s Menus of Change initiative.

The conversation wasn’t only about health, however. Asked what menu item is so popular that it could never come off the menu, University of Washington’s campus executive chef, Tracey MacRae, answered house-smoked pastrami. Later, MacRae noted an interest in trying more underutilized pork cuts, including pork brisket. Bonus feature: It’s “pastramiable,” she said.

The academic term means designing in a way that influences how consumers make choices. In foodservice, that can mean steering consumers toward making healthier choices in the cafeteria, in the dining hall or on the menu. Michiel Bakker, director of global food services for Google Food, put this simply: “Change the context, and change the food behavior.” He urged operators to think about placement of healthier items and the layout of the dining area. Google, for example, puts salad vegetables front and center with less wholesome foods radiating out from there. He also places chefs out in front of the guests to help curate options.

What I learned from MenuDirections: FSDs are a cardiologist’s dream