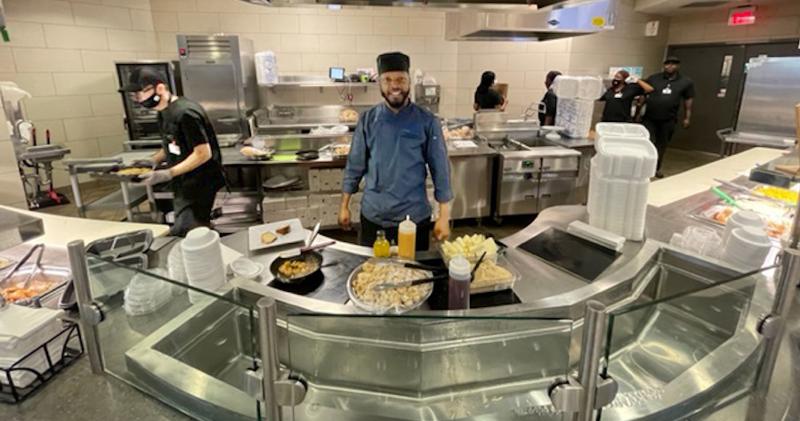 Lance Franklin drastically changed his eating habits and mindset 13 years ago to get back to a healthy weight. Now, the Cura corporate executive chef works to help his team and guests achieve their wellness goals.

“I’m a pescatarian and try to eat as clean as I can,” says Franklin. “I teach my chefs and cooks how to reduce meat on the plate and make substitutions. As a chef, you can improve your eating habits by experimenting. You never run out of options.”

At the healthcare and senior-living operations he manages for Cura Hospitality in Texas, Louisiana and Florida, Franklin plans menus, dining experiences and culinary demos that incorporate a small dose of nutrition education.

“I introduce healthier versions of favorites, like mushroom lasagna instead of meat lasagna and turkey burgers as a substitute for beef burgers,” he says. Franklin has also developed anti-inflammatory and brain-boosting spice blends to season these dishes and promotes Cura’s Be Well recipes that focus on plant-forward preparations. 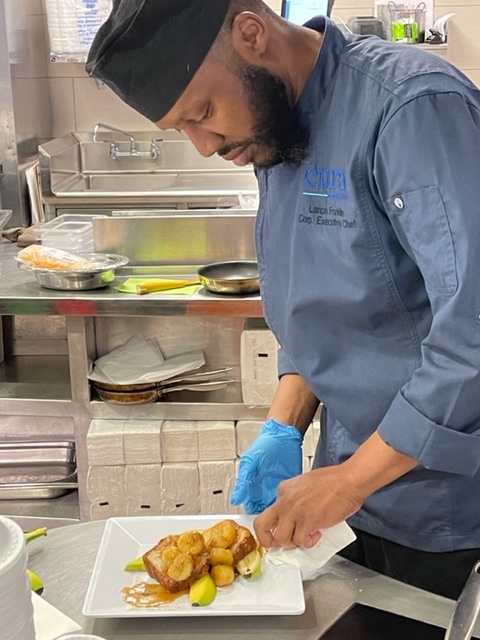 Through his Guest Chef Program, Franklin sets up interactive stations and culinary demos to get his message across and allow other cooks to showcase their talents. Since local sourcing is also a foundation of his menus, a recent station highlighted crawfish—a Louisiana seafood species—in omelets.

“At the station, I offered the omelets in the traditional way—with fresh eggs—but allowed people to substitute egg whites and low-cholesterol egg substitute to fit their diets,” he says.

While healthier cooking is a priority for Franklin, that doesn’t preclude preparing some more indulgent specialties he came to love growing up in New Orleans. The crawfish also go into a creamy crawfish mac ‘n cheese. And a recent station at Woman’s Hospital in Baton Rouge, La., showcased Bananas Foster—“my favorite dish from home,” he says.

“Bananas Foster is the first recipe I ever tried cooking when I was just 7 years old,” Franklin explains. “My dad was in the food business and used to make it for banquets, serving up to 300 people.”

Franklin watched his dad prepare the dish on a video and he practiced again and again, testing it on his twin brother, until it won his dad’s approval. “I hold up Bananas Foster as the best, above cheesecake, bread pudding and any other dessert,” he says. “It’s my reason for getting into the business.”

Since those early days, Franklin has prepared the dessert hundreds of times, sauteing the bananas in butter and brown sugar, swirling in a little dark rum and serving the combo over vanilla ice cream. He also does a version over a lightened-up poundcake. 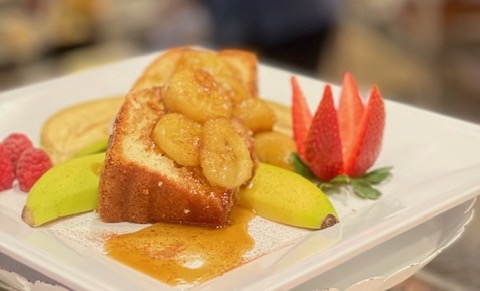 A variation on Bananas Foster / photo courtesy of Cura Hospitality

He has also taken it in a dairy-free direction, sauteing the bananas in vegan butter and substituting pureed frozen bananas for the ice cream. He even developed a recipe using plantains instead of bananas.

Franklin is a trained chef and has been with Cura Hospitality for 12 years, but he recently returned to culinary school to update his understanding of the science of nutrition and pass that knowledge on to his team and guests. “It’s always about being a student,” he says.