Amid the flooded roads and damage caused by Hurricane Joaquin, it was business as usual at the Medical University of South Carolina in early October. 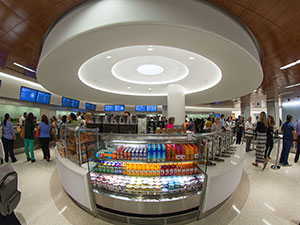 Had flood water reached campus, the Charleston, S.C., university’s foodservice emergency preparedness plan would have immediately kicked in, says Brad Masteller, general manager and director for the food and nutrition department. With an independent power source, several days worth of food, two teams of staffers and cafeteria facilities located on higher ground, MUSC is prepared for floods, hurricanes, tornadoes, earthquakes and ice storms —any of which can hit Charleston in a given year.

“When you live in an area like this, you have to plan for things that are going to happen,” Masteller says.

Operators in states where earthquakes, hurricanes, flooding and tornadoes are commonplace are keeping natural disasters in mind when designing or renovating their facilities. But in the case of New York University Langone Medical Center, hindsight was key in rebuilding after Hurricane Sandy struck New York in October 2012.

Langone’s renovated facilities reopened in August 2015, almost three years after Hurricane Sandy touched down. In rebuilding, staffers thought critically about how to prevent a breakdown of foodservices if an emergency were to occur again, says Amy Horrocks, vice president for medical services at the 1,069-bed facility. That includes contingency contracts, on-site nonperishable food and, most importantly, a backup kitchen.

“Losing everything due to Sandy was terribly traumatic,” Horrocks says. “The cafeteria impacts the entire hospital.”

At the California Technical Institute, preparing for earthquakes is a part of daily life. The university and its Seismological Laboratory are known as a global leader in earthquake research, so naturally its Pasadena, Calif., facilities were built to withstand a magnitude-8 quake, said Jonathan Webster, senior director for Caltech Dining Services. “If we ever have an earthquake, we’ll have access to food,” he says.

Caltech’s emergency preparedness foodservice plan hinges on being able to provide food and water to about 750 students, Webster says. The main kitchen’s refrigerator and freezer sit on an outdoor loading dock, which would remain accessible if an earthquake hit and the building crumbled. Two additional campus kitchens can serve as backups.

The university’s plan includes the assumption that an earthquake would cause a shutdown of electricity, gas and water, which is why outdoor freezers full of meat (which would defrost in the event of a power loss) for barbecuing  and refrigerators filled with water make sense. Bottled water and barbecue could feed the students for up to two days, Webster says.