Jed Greeke has a straightforward policy for smartphone use among the 45 employees he supervises at the University of New Hampshire: If a verbal warning doesn’t work, their phone is taken and held until the end of the shift. 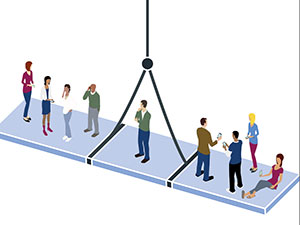 “We have a lot of student workers, and our policy pretty much says that anything that can go ‘beep’ has to be kept in your locker or not brought to work,” says the assistant manager of catering and conferences at the Durham, N.H., university.

Regulating employees’ smartphone use might make operators feel like an overbearing parent, but it’s becoming a necessary evil of the workplace. One in four workers in a 2014 CareerBuilder survey admitted to spending at least one hour during the workday on personal calls, emails and texting, while half of employers in the same survey noted cellphones and texting as the primary productivity stopper in their workplace.

Because smartphones have been woven into daily life, operators have to learn to use the technology in their favor, says Chas Kelly, vice president of culinary services at Watercrest Senior Living Group. “You just can’t fight [technology],” says Kelly, who trains his employees to give family members the operation’s direct number in case they need to be contacted. “You have to constantly look at it, change it as you see fit as things evolve, and you’ll never get caught behind the curve.”

The 52 employees he oversees in the Vero Beach, Fla.-based retirement community use their smartphones to compile online inventories, look up recipes and communicate with Kelly about scheduling. “If I call, it goes to voicemail, but if I text I’ll immediately get a response,” he says of filling a shift outside of work hours.

Bill Claypool, assistant director and executive chef of dining services at Vanderbilt University, says his department is looking to revamp its smartphone policy by the fall semester to something more realistically enforceable. Currently, no electronic devices are allowed in any work area; but Claypool says another part of the rule, which states staffers aren’t allowed to use their phones in view of customers, is what’s really giving him problems.

“They’re allowed to have their phones while on break, and naturally they’re going to pull it out to see what’s been going on when [they’re] eating,” Claypool says. “We encourage them to eat in the dining hall so that they are visible to customers, so it is impossible for their phones not to be visible at that point.”

Along with six other assistant directors, Claypool oversees 243 employees, and says the entire supervisory team wants to be savvier with wording the new policy. “We know we need to let phones become more enmeshed with our operation and trust [staffers] to do the right thing,” he says. “At the end of the day, you’re either paying attention to your work or phone.”

Kelly agrees. “Keeping staff off of their phones is very manageable if you’re on top of the issue,” he says. “It’s one of those small things that can become a major issue if you let it go in the beginning.”