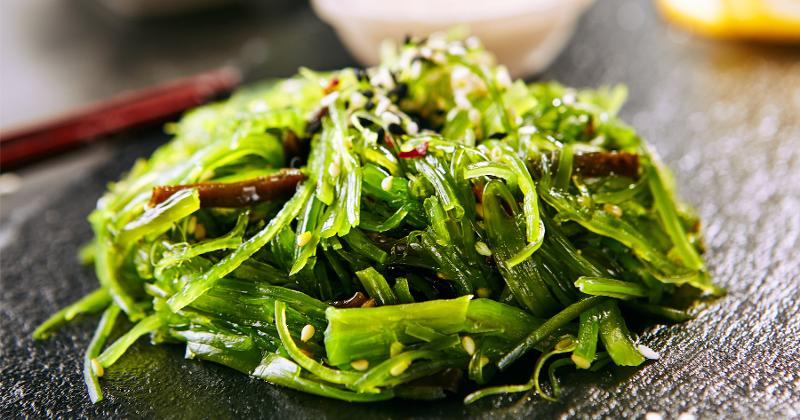 The University of Massachusetts at Amherst was recently awarded a $319,000 grant to help bring more climate-friendly kelp to its menus, and the dining team is embarking on a two-year project to do just that.

“Gen Z cares about climate change, regenerative agriculture, animal welfare, taking care of the land and where food comes from,” says Ken Toong, executive director of auxiliary services at UMass. “They want more than just to buy local—they want to see how we support the climate.”

Kelp, which is nutrient dense and a good source of iodine, iron, folate and vitamin K, has been served at UMass for several years, showing up in smoothies, soups and tempura batter.

But the dining department plans to ramp things up, taking advantage of the umami the ingredient brings to dishes.

The team will start by introducing and highlighting foods that traditionally feature kelp, such as the Korean dish kongguksu (soy milk soup noodles with a spicy kelp salad on top).

The next step? Adding kelp to items where seaweed doesn’t typically appear, such as pizza with pepperoni and sweet-and-sour spicy marinated kelp and a carbonara linguini with uni and kelp puree. Vegetarian omelets and scrambled eggs will get the kelp treatment, too.

“We’ll just have fun with it and push the flavor boundaries,” says Alex Ong, director of culinary excellence.

In a recent UMass Dining survey, 51% of the more than 800 students who responded said they would like to see more low-carbon/plant-based foods on the menu.

Additionally, 88% said the climate crisis frequently or sometimes informs their actions, and 76% reported that it’s important for them to reduce their personal carbon footprint.

“It’s very refreshing to see students at such a young age being so actively engaged and knowledgeable about the environment and what’s good,” says Ong. “They are our biggest ambassadors if we do this right.”

Beyond its own environmental and nutritional goals, UMass is hoping its work with kelp will help create a playbook for other universities to follow.

“The idea is to create a network of vendors and suppliers to be part of this process to get this to other foodservice locations [even inland ones],” says Ong. “This is a long-term investment for us. Students are holding us accountable, and there’s no wrong way of doing this.”

On this endeavor, UMass Dining is partnering with New England-based kelp producer Atlantic Sea Farms. UMass is procuring the kelp through its regular distributor, and it’s very affordable, Ong says. In addition, the team is working closely with Atlantic Sea Farms on recipe development and marketing.

“This is still uncharted territory,” says Toong, noting that “most Americans are not very familiar with kelp.”

The grant “will help us to accelerate the usage of kelp in a variety of applications and help us take risks in introducing more,” he says. “Then we’ll measure the results. What can we do to make it part of the everyday diet?”