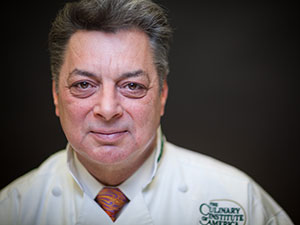 While food-savvy Gen Z diners have college dining halls taking their cuisine to the next level, the student-diner bar is set higher at the Culinary Institute of America, where those same students are future chefs and industry leaders.

So when Waldy Malouf agreed to help oversee the construction of the new 28,000-square-foot student union and dining facility on the school’s Hyde Park, N.Y., campus, he had to tap into his 30 years of expertise owning and operating restaurants in order to create an experience that would cater to students’ discerning tastes while providing them with a world-class learning environment.

Returning to his roots

A 1975 CIA graduate himself, Malouf became an accomplished chef, restaurateur and author. Most notably, he spent 13 years as co-owner and chief operating officer of New York City’s Beacon Restaurant, known for its use of open-fire cooking. When he suddenly found himself “restaurant-free” in 2013, the stars aligned for him to return to his alma mater, he says.

“After more than a little hesitancy, I decided to act on a goal of making education part of my work,” Malouf says. “As a chef, I always was teaching anyway, but the school created a way to impact more young people.”

Rebecca Oetjen, CIA facilities project manager, who oversaw the construction of the student dining facility with Malouf, says he was perfect for the project. “Being a former student, his background as a chef, his having owned multiple restaurants and his business experience on the outside—he brought the whole package,” she says. “He helped ensure that we really met the goal of satisfying the student.”

Malouf isn’t just responsible for student dining. As senior director of CIA food and beverage operations, he also oversees special events, catering and restaurant operations for the school’s New York, California and Texas campuses. Since taking on his role, one of his top priorities has been to “re-energize” the CIA’s 10 restaurant concepts—all classrooms that serve the public—by updating the menus, beverage programs, design and ambiance, websites and logos, and marketing approach. His goal: to improve the educational experience for students while enhancing public perceptions and drawing in more customers. He’s about halfway there, he says.

While that work continues, Malouf’s biggest accomplishment to date has been opening the new student dining facility in Hyde Park. Having come on board just after initial planning for the project had started, he says he was “attached to it at its infancy.” For the next two and a half years, he worked on drawings, supervised construction and collaborated with hundreds of people to bring the concept to fruition. In June 2015, the new facility—dubbed “The Egg”—finally hatched.

It’s a unique combination of college dining hall, classroom setting and hangout—“a dining room/kitchen/living room, if you will,” Malouf says. While he set a very high standard for the food options, Malouf wanted The Egg to be much more than a place to eat.

“In order to make the space unique and vibrant, I really pushed for amenities and activity centers to increase student satisfaction by making it a place to hang out,” he says.

Malouf also made student learning a priority, and all of the kitchens in The Egg are open for “subliminal learning.”

“There’s a lot of foodservice going on that students are involved in,” Malouf says. “It’s good hands-on education for them, and very unique in the world.”

Also unique in the world: a fully functioning on-site microbrewery and learning classroom built in partnership with Brooklyn Brewery that produces beer for all five of the campus’s commercial restaurants, as well as special events and The Egg.

“Everyone jokes with me, ‘You’re making beer on a college campus—how can you go wrong?’” Malouf says. “But we maintain the educational part of it, and we’re a little ahead of the curve by doing that and showing the industry that we’re serious about it.”

Oetjen credits Malouf’s outside experience and connections with bringing the project to fruition; he had been involved with Brooklyn Brewery since its inception and was friends with co-founder Steve Hindy.

“The brewery simply wouldn’t have happened without Waldy’s influence and vision,” she says.

The center of campus life

With 550 indoor cafe seats and an additional 150 patio seats overlooking the Hudson River, The Egg serves about 2,000 meals a day to staff, faculty and students. According to The Egg’s executive chef, Mike Smith, who worked with Malouf on and off for 20 years in the private sector before joining him at the CIA, The Egg quickly is becoming exactly what Malouf envisioned: The center of student life on campus.

“From the beginning, Waldy had a very clear vision of what The Egg would be,” he says. “He’s focused on student satisfaction and providing a unique place for them to relax and hang out, but still be really immersed in the culture of food and hospitality.”

Smith adds Malouf’s work ethic and attention to detail are second to none. “It’s inspiring,” he says. “You get on board or you get left behind, and you want to be on board because the enthusiasm is contagious."