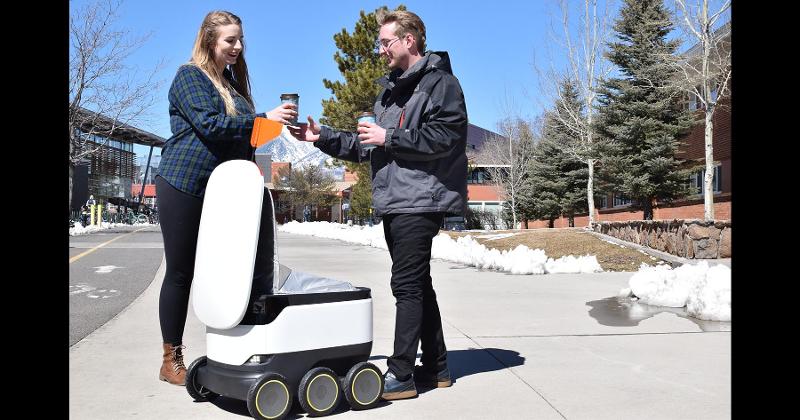 Where the foodservice industry’s labor shortages and students’ calls for convenience meet, operators are about to find delivery—including by robot. For the college and university sector, it’s already arrived. George Mason University launched a fleet of autonomous delivery vehicles in January, followed by Northern Arizona University (NAU) in March. The six-wheeled boxes scoot around both campuses, and can be unlocked by phone app.

The robots’ wow factor went international. TV crews made the haul up from Phoenix stations—and even from the BBC—to film in Flagstaff, Ariz. People stopped to pet the robots like kittens in Fairfax, Va. And customers reported paying the $1.99 delivery fee just for the kick of having a robot deliver them a cup of coffee.

“It was amazing to me the stir it caused,” says Ben Hartley, Sodexo’s director of campus dining at NAU.

Vendor Starship Technologies supplied the vehicles in both cases. The fleets are now up to 40 machines at George Mason and 32 at NAU. Surprisingly, no vandalism has been reported on either campus beyond students wanting to put stickers on the vehicles—leaders say humans tend to protect the robots like little siblings. 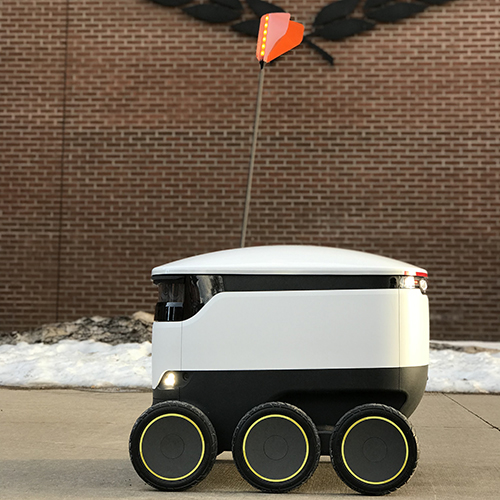 The vehicles operate on a combination of artificial intelligence, ultrasonic sensors and cameras. (Humans can monitor the machines and take them over at any moment.) The robots map campus and get better at navigating it, but mishaps can occur. When one machine went rogue off campus in Flagstaff, Hartley found it and put it in his back seat—and endured an ear-splitting alarm. “It was screaming until I got him back to campus,” he says. “It set off a panic—they thought I was picking him up to pirate their technology.”

"It was amazing to me the stir [the robots] caused.”—Ben Hartley

The number of deliveries has averaged 400 per day at NAU, jumping to 600 during finals week. There was no upfront cost, Hartley reports—the company provides the robots and keeps the delivery fees, and the universities pay them some revenue.

At George Mason, the foodservice department has actually added 20 student workers, called “robot runners,” to fill the delivery vehicles. Even with that additional labor cost, the operation’s net revenue has grown by 5% since introducing the option, according to Jeff McKinley, a Sodexo district manager who oversees the university’s foodservice.

NAU had hoped to encourage breakfast participation and saw a “noticeable uptick” when the robots were added, Hartley reports. Still, he calls overall growth “modest.” He advises fellow FSDs to avoid multiyear contracts and to moderate any wild expectations. “If you think you’re going to put robots in and grow your sales by 25%, that’s probably not accurate,” Hartley says. “It’s a component. We’re going to pilot, and if it’s a situation of moving money from our left to our right pocket, we’re going to have to reevaluate.”

George Mason students have left thank you notes and drawings inside the robotic vehicles on its campus, a kind of 21st-century message in a bottle.

Other universities, such as the University of Wisconsin-Madison, were poised to launch robotic delivery this year. Ongoing labor struggles are a driver, says Peter Testory, director of dining and culinary services for the university’s Division of University Housing. It’s not just full-time positions that are being left vacant, he says—even the number of student employees has declined year over year on campus.

Autonomous delivery will also free up space in some crowded lunch venues, leaders hope. “Between the students wanting it and expecting it … [and our] hoping it’ll open up some seats in our facilities, it’s kind of a perfect storm of opportunity,” Testory says. “Society has changed, not just students. They are used to services being readily available to them, not having to drive, not having to own a car, not having to shop, ordering premeasured, ready-to-cook dinners from Amazon or Blue Apron. As a provider, we have to react to what they’re used to, what their needs and wants are—good, bad or indifferent.”

Autonomous vehicles aren’t the only doable delivery option if you’re willing to hammer out the logistics, as Oregon State University in Corvallis, Ore., has proven. It launched a late-night delivery program, Food2You, in fall 2015 under the direction of Kerry Paterson, director of residential dining and catering for University Housing and Dining Services. The offering was dreamed up on three weeks’ notice after a summer brainstorming session that underscored students’ desire for more late-night offerings. 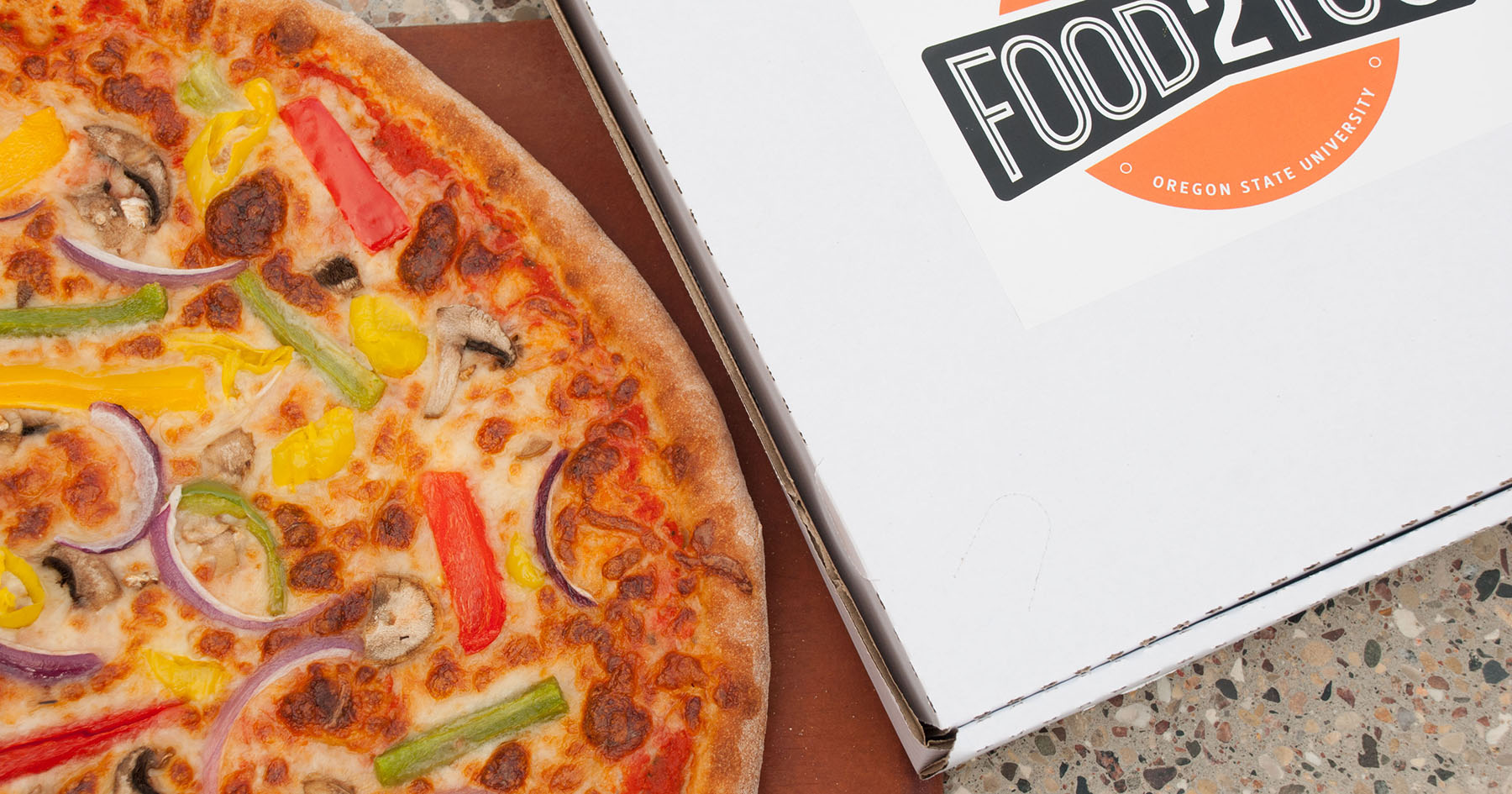 Food2You started by delivering pizza between 9 p.m. and midnight. It soon hit max oven capacity of about 120 pies per night (“It’s like Super Bowl Sunday every night,” Paterson says) and added items such as salads to spread out the demand. Fresh-baked cookies and milk are now top sellers. Ice cream also proved popular, but it wasn’t a good delivery combination with warm pizzas.

A key advantage: Unlike pizza delivery from off-campus vendors, or even robots on other campuses, Food2You comes all the way to individual dorm rooms. (Couriers don’t report what they see behind the door unless a serious health or safety concern presents itself.) Three drivers collect a set of orders for each of the three residential sections of campus. Eight couriers stationed in those areas meet the drivers and take it from there.

"As a provider, we have to react to what [students are] used to, what their needs and wants are—good, bad or indifferent.”—Peter Testory

All in all, Food2You requires about 15 student employees per night. Leaders report it has increased revenues—39% of students living on campus participated in the two highest meal plans in 2018-19, up from 31% in 2015-16.

And the program has given Oregon State a competitive advantage among prospective students, says Jennifer Vina, the division’s director of marketing and communications. “When we highlight this, we get a lot of gasps and oohs and ahs,” she says. “Parents can’t believe you can get a pizza delivered right to your room, and students haven’t encountered it on other campuses. It becomes a unique selling tool.”