Amid estimates that over 11 million U.S. children struggle with hunger, school nutrition advocates have been pushing for universal free meals in schools for several years now.

With the pandemic shining a spotlight on economic hardship and the essential role of school nutrition professionals, those in favor are pushing even harder for Congress to pass legislation that would guarantee every child gets a no-cost meal at school.

“Everyone has been applauding for [school nutrition professionals] and patting us on the back, recognizing us as essential,” Amanda Venezia, director of dining services at Londonderry School District in Londonderry, N.H., said at a recent virtual town hall hosted by the nonprofit FoodCorps. “Well, it's time to take that good mojo and put it towards where it needs to be, which is universal school meals.”

A world with universal free meals, advocates argue, would be one in which school menus were more innovative and students, no matter their background, would achieve higher academic success and have fewer health issues. And since the National School Lunch Program serves over 31 million children each day, the switch to universal free meals would also have a ripple effect felt throughout the entire food industry.

Studies conducted at schools already offering universal meals can help provide insight as to the effect they would have if implemented nationwide. Data shows that universal meals could lead to higher test scores and increased meal participation, and those in favor of the measure argue it would put an end to lunch shaming as well as the stigma associated with school meals.

“The stigma of participating in school lunch is holding us back,” says Dr. Katie Wilson, executive director for the Urban School Food Alliance, a nonprofit organization whose members are many of the country’s largest school districts.

The shame is still present even at schools that provide universal free meals under the Community Eligibility Provision (CEP), Wilson says, because low-income students know that the program exists only because of them.

“They still know that that's not given to you the same way that you can walk into a science lab and participate in science or the same way school districts hand out iPads so that every kid stays connected,” she says. “That's just part of the school day, but they know that in their district, there's a special program for school meals and that's why they don't have to pay for it anymore. So, these kids, particularly these young teens, they just won't participate.” 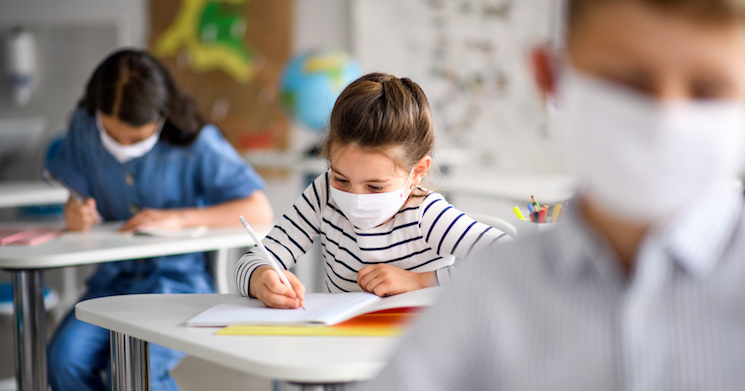 The COVID-19 pandemic has cast a spotlight on food insecurity and the essential role of school nutrition professionals./Photograph: Shutterstock

Melinda Bonner, child nutrition director at Hoover City Schools in Hoover, Ala., agrees that a stigma has become associated with school meals and says she envisions a world where universal meals would help blur the distinction between the haves and have-nots.

“I would say my vision would be everyone's just eating at school together, that's the idea,” she says. “I know there's going to be some [students] that are so picky, they’re not going to eat with me whether it’s free or not, [...] but like I said, my desire would be that more students are eating together and they're all eating the same.”

Today, school nutrition staff are tasked with going through applications for free and reduced-price meals each year. Implementing universal meals would allow them to spend less time on paperwork and more on training staff, creating innovative dishes and more.

“A reduction of paperwork would be amazing,” Venezia said during the town hall. “For me, I can't explain to you how much time I could devote to creating new recipes in my kitchen.”

A world with universal free meals would also give school nutrition programs greater financial flexibility, Wilson says, since money typically spent on administrative work could be invested in other areas. “People have to hire teams of temporary employees just to get through those applications every fall,” she says. “So, all of that money could be put into the quality of the program, the quality of the food and nutrition education.”

"It's time to take that good mojo and put it towards where it needs to be, which is universal school meals.” -Amanda Venezia

In addition, school nutrition professionals could stop taking on the extra role of debt collector.

Another new normal for the industry

Universal meals would create major shifts for school nutrition professionals and students, but if done correctly, could also create lasting positive change within the foodservice industry as a whole, says Krystal Oriadha, senior director of programs and policy at the National Farm to School Network.

During the FoodCorps town hall, Oriadha took time to explain why universal meals provides an opportunity to reconstruct the food system and make it more equitable, environmentally friendly and more.

The National Farm to School Network has released a set of values it says should be implemented when constructing a bill for universal free meals. Many of those values are based on guidance from other entities such as the Good Food Purchasing Program, and incorporating them would help meet many of the current goals set by the Biden Administration, such as fighting racial inequality and climate change, says Karen Spangler, the network’s policy director.

“Good nutrition lends itself to better academic success, and both of those combined lend themselves to much better contributions to society, and less medical costs in the end.” - Dr. Katie Wilson

Along with making sure stakeholders throughout the food chain would have a say when creating universal meal legislation, many school nutrition professionals and advocates are also pressing for higher meal reimbursement rates. During normal times, these can average between 32 cents to $5.78, depending on where a district is located and if a student qualifies for free or reduced-price meals. Higher reimbursement, advocates argue, would make sure school nutrition operators could cover their costs and give them the opportunity to expand procurement of local, fresh and healthy ingredients.

“For this progress to occur, there needs to be more money definitely allocated to school meals. […] Let's pay our people appropriately and support the entire industry,” Venezia said during the town hall.

Schools have been receiving a higher reimbursement while operating under summer meal waivers during the pandemic.

“Right now, we are receiving a higher reimbursement rate for every meal served because we are under the Summer Feeding Program reimbursement,” says Bonner. “Now, I hear them saying, ‘You know, we're going to Congress, we're petitioning for universal free meals,’ but what is the reimbursement rate? I can do this. I can feed every child for free, as long as I can cover all of my costs.”

Time, money and effort will be required to pass a bill that meets the need of students, nutrition professionals and other industry stakeholders, but advocates say it’s a worthy investment.

“We know that good nutrition lends itself to better academic success, and both of those combined lend themselves to much better contributions to society, and less medical costs in the end,” says Wilson. “[Universal meals] just make sense.”