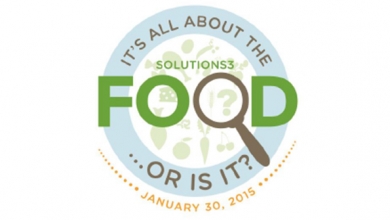 The theme of the conference, co-sponsored by the Society for Hospitality and Foodservice Management (SHFM), the Association for Healthcare Foodservice (AHF) and the Foodservice Consultants Society International (FCSI), was “It’s All About The Food . . .  Or Is it?”

There were plenty of chefs on hand to talk about food, with everything from sustainability to allergens and gluten on the table. They shared a wealth of knowledge, and some surprising pieces of intel.

Here are five takeaways gleaned from the one-day affair.

In talking about seafood sustainability, Chris Ivens-Brown, corporate chef for Eurest, a Compass Group company, warned attendees of the increasing use of fish aggregating devices (FADs) to increase their haul of fish, particularly tuna. (A FAD is a device that floats in the water, like a buoy, to lure fish.) FADs may be natural or manmade, and they play off of fishes’ natural attraction to floating objects.

Although such devices have been used for centuries, Ivens-Brown warned that newer, electronic FADs are not only allowing commercial fisheries to catch more fish, they also are increasing the amount of bycatch that is lured in—and often thrown away. The use of FADs is not heavily regulated, and scientists are just beginning to study their potential impact.

Scientists from the University of Philippines Diliman in Quezon City, Philippines, in an article published last year in the ICES Journal of Marine Science, suggested that the use of FADS in overfished waterways “can only accelerate fisheries’ collapse.”

“I think before too long we’ll have to be asking for our fish to be FAD-free,” Ivens-Brown said.

That was the message Chris Linaman, executive chef for Overlake Hospital in Bellevue, Wash., left attendees with as he wrapped up his presentation about the efforts his hospital has taken to improve the quality of the food it serves.

Linaman briefly outlined Overlake’s program, which focuses on increasing the availability of fresh produce and the amount of locally sourced foods the hospital buys, eliminating the use of foods made with, or containing, genetically modified ingredients, and improving access to antibiotic-free proteins.

Following guidelines set forth by Health Care Without Harm, Overlake has increased its purchase of “reduced antibiotic use” proteins from 19% in 2013 to its current level of 67.5%. He added that the hospital is trying to band together with other healthcare organizations to combine purchasing power in order to negotiate better prices for such proteins.

“We have to stop creating our own patients with the food we serve,” he said.

3. Local sourcing isn’t the only way to lower your carbon footprint.

Chandon Clenard, executive chef for Performance Dining at Stanford University, in Stanford, Calif., shared a surprising fact: The university has lowered its carbon footprint by buying its beef from Australia. “They process beef much differently there [than in the U.S.],” Clenard explained. “We can get it for lower cost versus having it trucked in from the Midwest, and during the 40 days it takes [to arrive] by boat the beef is aging.”

He added that had the university not made the shift to Australian beef, it would have been cost-prohibitive to buy grass-fed beef. “We try to source our food within 200 miles, but sometimes you have to look outside of that box,” Clenard said.

4. Environmental nutrition may be the next health catchphrase.

More than that, “it is a public health imperative,”
said Stacia Clinton, New England director of Healthy Food in Healthcare, the foodservice arm of Health Care Without Harm.

According to Clinton, environmental nutrition “redefines what constitutes healthy food.” It takes into account not only the nutritional value of individual foods but also the political, economic and environmental factors related to the food system as a whole.

The elements of environmental nutrition include the impact of climate change on food, the effect of food’s exposure to pesticides and other chemical agents, the effect of air and water pollution on food, and the dangers of increased antibiotic resistance brought about by the use of drugs on animals.

Noting that several of the most deadly diseases, including diabetes, obesity, heart disease and some forms of cancer, are caused by diet, unless society is able to turn around the health of the average American, “we’ve failed as dietitians.”

5. The incidence of food allergies continues to rise at an alarming rate, without a known cause and with little chance of abatement.

Betsy Craig, CEO of MenuTrinfo, a company that specializes in nutritional analysis and foodservice training, pointed out that 15 million Americans—5.9 million of them children—have food allergies, a 50% increase from 1997 to 2011. Worse, she added, the U.S. is “at least 10 years behind Europe” when it comes to dealing with food allergies and gluten intolerance.

Although scientists have speculated about the reasons for the marked increase in food allergies, no one has been able to identify with any confidence a single cause. But Craig said that even finding a cause would not change the fact that foodservice operators must be more watchful than ever about the foods they are serving.

She offered several tips for operators to guard against the nightmare of a customer being harmed or killed by an allergic reaction:

How will the FDA's new sodium guideline impact menus?