Raised in upstate New York, Mark LoParco’s interest in sustainable food systems began early in life. “I grew up in a family of 10 and lived out in the country and hunted and fished and did those kinds of things, and still do,” he explains. This agricultural upbringing, paired with a sixth-grade geography lesson that introduced LoParco to Montana and the state’s vast land mass ratio, set him on the course for a future of food in the West. 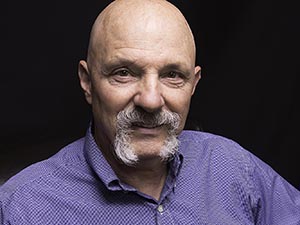 From the ground up

Today you’ll find LoParco at the helm of University of Montana Dining, a department that LoParco, as its first and only director, played an integral role in establishing. “Basically this department was built literally from the ground up by me and my staff over the 22 years that I’ve been here,” he explains. With no best practices in place, “we were serving food and that was about it. There were no policies and procedures; it was just a ton of work.”

But LoParco and his team did the work, and then some. Today, the department boasts an annual budget of $12 million with more than 500 employees and serves more than 5,000 meals per day.

Among the long list of achievements during LoParco’s tenure, including multiple sustainability initiatives, department rebranding, facility renovations and re-engineering of meal plans, is the Farm to College Program established in 2003. Under the program, fresh, locally grown and processed foods are brought to campus through direct relationships with local farmers, ranchers and businesses. More than $800,000 in Montana-produced foods are purchased each year, supporting the state’s agricultural economy while satisfying and inspiring students. The initiative received more cachet when LoParco and colleague Neva Hassanein, professor of environmental studies at the university, gave a recent TEDx Talk about the program. TED is a nonprofit “devoted to spreading ideas, usually in the form of short, powerful talks,” according to the organization’s website.

“Mark is highly energetic. He is high energy, he is a thinker, he’s innovative,” shares Teresa Branch, Ph.D., vice president for student affairs. “The student body has gotten behind [the program]—who wouldn’t appreciate fresh food? Of course Mark has always provided outstanding meal options for the student body. It’s not unusual to get steak, shrimp and a variety of things that when I was in school, I certainly don’t remember. He’s able to do a fantastic job of providing meals for our student body. It’s a rare complaint that I get, and the complaint is almost never about the food.”

Along with the Farm to College Program one of LoParco’s initiatives has been planting a campus garden. “We have very strong student support for what we’re doing, and by that I mean that each of the last three graduating classes, for their class legacy project, have all been programs in UM Dining,” he says. “I’m able to look out my window here and there’s a greenhouse sitting there that was built in part with student funds. There also is a solar array that is going to be on the top of the building here—[student] funds were donated toward that. And then this year they’re donating funds towards a food washing station in conjunction with the garden. The students have been very, very supportive, and supportive with their dollars, in terms of our sustainable business practices.”

LoParco’s passion has inspired more than Montana’s students. As executive director of the UM Food Service Management and Purchasing Consortium, LoParco provides administrative and financial leadership for dining services at all four UM affiliate campuses. As NACUFS 2013-2014 president, he leads his peers in foodservice. And through service on community boards, he serves the areas surrounding the university and his home.

“I still get really excited to come to work. There’s so much to do, there’s no shortage,” LoParco says. “I’m involved on campus in a wide variety of areas … there’s a lot to keep me busy and I tend to stay busy.”

For operations looking to increase the use of local and sustainable foods, LoParco recommends starting with the “low-hanging fruit. So what’s closest and what’s available enough in quantities that can make a difference. The key is to look at what’s available and in what radius,” he says. “Any time I talk with folks, [I] encourage personal activism. That’s as simple as when you go out to eat, just ask what’s local on the menu and buy it. You can be personally involved in your local food movement.”