Plant-based or plant-forward? Vegan or vegetarian? No matter the label attached, produce- and plant-based proteins are proliferating on menus. And though different forces—including health, sustainability and animal welfare—may be driving consumers toward this eating style operators are getting on board with the trend, albeit some more aggressively than others.

Across menus at leading chain restaurants, the terms vegan, vegetarian and plant-based lately have all grown, according to Technomic Ignite menu data. But menu mentions of plant-based have skyrocketed, jumping nearly 300% in the past year. Consumers seem to prefer that terminology, Technomic finds: Fifty-eight percent say they are likely to purchase plant-based foods, while 49% would buy vegetarian and 43% would choose vegan.

No doubt plant-based is buzzing in part because of faux meats’ recent surge. The two big players—Impossible Foods and Beyond Meat—have made huge inroads in foodservice, and their products are trending in all segments, from quick-service to sports bars, college dining to health care.

Fifty-eight percent of consumers say they are likely to purchase plant-based foods.

Plant-based patties are one of the hottest menu items in foodservice; veggie burgers overall are up 18% across major U.S. chains, with Beyond and Impossible driving the growth, says Clare Aigner, manager of syndicated research for Technomic. In addition to burgers, chefs are also using the bulk product, crafting it into meatballs, taco fillings, pizza toppings and more. And they’re not stopping there.

While some sales of plant-based meats are coming from vegan customers, much can be attributed to flexitarians: eaters who may choose a plant-based burger one day and pepperoni pizza the next. Just half of these consumers say these meat substitutes taste as good as real meat, so some operators are not going the imitation route.

Fake meats are 'not an option' for fast-casual chain B.Good, its CEO says.

“Each burger hits on a slightly different customer need state, and they’re flying out of our stores,” says CEO Chris Fuqua, who joined B.Good last year from Dunkin’ Brands. Fake meats are “not an option” for the chain, says Fuqua, pointing out that the chain was “founded on the principle of food from the farm, not from the lab.”

One of the concept’s most successful plant-based dishes, Spaghetti and Meatballs, features eggplant meatballs and zucchini noodles topped with marinara sauce. “We’ve sold over 3.5 million orders since it was introduced,” he says. “And its popularity continues to surge.”

B.Good’s own research with focus groups, surveys and social listening finds that its customers are looking to reduce consumption of red meat, not eliminate it entirely. So beef burgers and chicken sandwiches share menu territory with the Flexitarian Burgers and seasonal grain bowls. A recent addition is the Watermelon Poke Bowl, which uses marinated and grilled watermelon cubes instead of tuna. It’s rounded out with a quinoa blend and kale, then flavored with Korean hot sauce.

The influx of faux meats has been a disruptor at restaurants, but college dining has long boasted vegan stations and even meat-free dining halls, and vegetarian menus have been essential to college dining for a generation.

At the Evanston, Ill., university, 12% of meals served are now vegan—a number above the national average and one that increased when Gen Z started matriculating, says Jennifer Byrdsong, vice president of operations with Compass Group, which oversees foodservice at Northwestern.

While the Impossible Burger is served at one retail concept called Patty Squared, all other plant-based items at the university are made from scratch. A plant-based station in dining halls called  Rooted offers one hot entree, two hot sides and a dessert every day. Featured items include Curried Chickpea Hash with Broccoli and Spinach, Seared Orange Sriracha Tofu and Grilled Chimichurri Cauliflower Steak with Acorn Squash Ginger Mash.

The number of vegan entrees and side dishes offered at Northwestern eateries has increased by nearly 17% from 2018 to 2019, and seasonally changing salad bars in each dining hall are at least 50% plant-based, Byrdsong says.

Doubling down on plant power, Northwestern Dining encourages students to participate in a 21-day plant-forward challenge through its Sustainability & Wellness Blog, guiding them with daily menus. A dietitian educates participants about balancing nutrients and meeting protein requirements, suggesting supplements if needed. And both the newly renovated Allison and Elder dining commons include teaching kitchens, where students can learn to cook plant-forward recipes. Elder commons also houses a greenhouse, where fresh produce and herbs are available on a rotating basis. 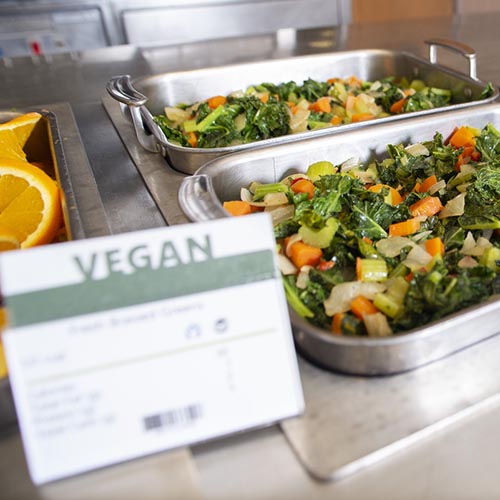 It’s not just the younger generations interested in veggie dishes; plant-forward fare has become a demand in corporate dining as well. At a leading tech company in Charlotte, N.C., where Eurest is the foodservice provider, the clientele includes a good number of vegetarians and vegans, as well as mainstream eaters seeking more plants, says the location’s executive chef, Benny Arce.

To that end, Arce has set up a separate bar of hot vegetables and grains, but no proteins. “Both groups can fill their plates with items such as quinoa, barley, farro, rice blends and seasonal vegetables, and then add animal proteins or plant proteins from another station if they wish to,” he says. Tofu is always available, including in varieties such as chorizo, and Arce is rolling out Beyond Meat. Still, vegetables and grains outnumber proteins every day, he says.

Meat and barbecue were always the main focus of Eurest’s corporate cafes in the Southern U.S., says Anna Pavisha, Eurest’s regional wellness director for the Southeast and Gulf states. But that’s shifting, she says: “Two years ago, no one would have asked for plant-forward choices, but that has changed dramatically.”

At Northwestern University, 12% of meals served are now vegan.

Other parts of the country are seeing similar moves. Denver has always been thought of as a meat-and-potatoes town, but now people are gravitating toward vegetables and fish, says chef-owner Alon Shaya, who helped put modern Israeli food on the U.S. map with his namesake restaurant Shaya in New Orleans, which he left last year.

In Denver, Shaya continues to offer naturally plant-forward Israeli cuisine at his two concepts Safta and Saba, though he is exploring other areas of the Mediterranean and focusing even more on veggies. New on Safta’s menu is a Persian dish called koosa, which is composed of stuffed, roasted zucchini flavored with roasted garlic and topped with chiles and sunflower seeds. And he’s using a smoker to infuse freekeh, green farro, pumpkin, cauliflower, sweet potatoes and other items with a more “meaty” taste.

Shaya is also discovering potential in plant-based milks and cheeses—ingredients that adapt well to kosher catering, where dairy products and meat cannot be mixed. “I’ve been blown away working with coconut milk to enrich curries and stews,” Shaya says, “and will continue to use coconut-based cheese alternatives because of their versatility.”