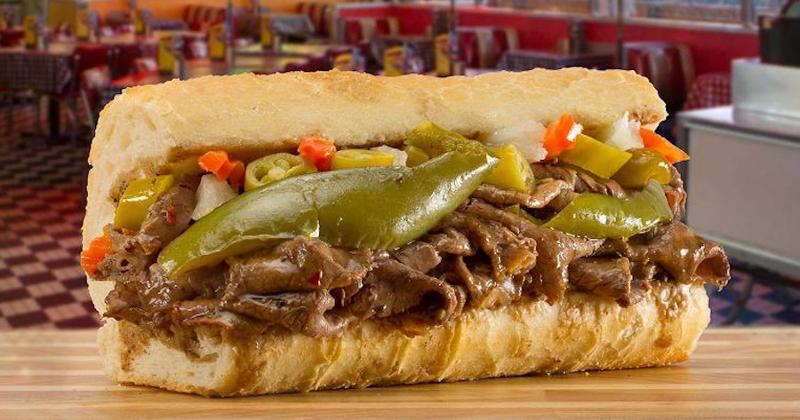 This summer has been a busy one for Joe Buonavolanto III and his family, who have been operating the Chicago-based Buona Italian Beef for three generations.

Sales have not only boomed at the chain’s 26 locations, but “there’s been a huge surge in Shop and Ship,” Buonavolanto said.

Credit “The Bear,” the Hulu/FX series that started streaming at the end of June and tells the story of a fine-dining chef who had to rescue his family’s Italian beef restaurant after the suicide of his brother. Since the show's release, Google Trends reports that searches for Italian beef have nearly doubled.

“We had to add beef makers in some locations during certain dayparts, and the sales mix changed to become heavier on beef,” said Buonavolanto, vice president of franchise operations for the chain. “It’s a great way to tell our story through the lens of ‘The Bear.’ We’re trying to associate ourselves with it in a happy way.”

Italian beef became synonymous with Chicago during the Great Depression, when unemployed factory workers were looking for economical meals, Buonavolanto explained. You use a cost-effective cut like top round, slice the beef very thin, pile it on bread with the gravy it’s cooked in, and it goes a long way.

Italian beef stands sprang up around the city, including Al’s Italian Beef in 1938, which claims to be the original. Small brick-and-mortar shops followed, but it wasn’t until 1971, when Dick Portillo, founder of Portillo’s, added the sandwich to the menu, that it gained a more widespread following. That was the same year Portillo began offering giardiniera, the spicy pickled vegetable condiment that most fans consider the must-have topping.

Giardiniera is an essential component of Buona’s sandwich too, but Buonavolanto believes his rises above the competition because of the gravy.

“We make our Italian beef the same way we did 41 years ago, when my father and his brothers opened our first location in 1981,” he said. “The 20-lb. pieces of beef are seasoned with garlic and Italian seasonings, seared and roasted, and all the drippings from the pan create the richly flavored gravy. The meat is sliced and layered in the gravy so you get a powerful bite of flavor in every sandwich.”

When customers order a sandwich at Buona, they’re asked “what’s your level of gravy?” They can spec a range, from dry, to original, dipped at the ends or baptized. “Baptized means the whole sandwich is dunked in the gravy,” said Buonavolanto. “Most customers request it dipped or baptized.”

In addition to the gravy, guests can add sweet bell peppers, giardiniera and even cheese. It’s all piled on an extra-long French roll, made by local bakery Turano’s. 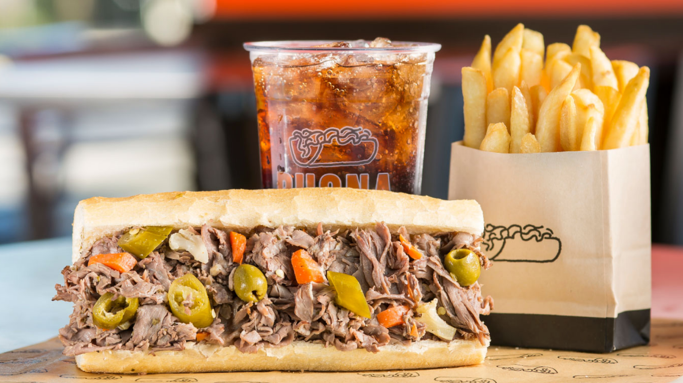 The Italian beef sandwich as served at Buona. / Photo courtesy of Buona

Buonavolanto claims that other Italian beef concepts, including The Original Beef of Chicagoland represented on The Bear, prepare the gravy separately from the meat. Some even beef it up with bouillon or broth.

Portillo’s boasts its own bragging rights.

“One of the biggest differences with Portillo’s Italian beef is that we make it ourselves in our commissary kitchens in Addison and Aurora, Ill., so that it’s consistent across the brand,” said Garrett Kern, Portillo’s VP of culinary and strategy. “We slow-roast it for four hours, then thinly slice it. We also use the same homemade seasoning blend we’ve used for the past 45 years.”

Portillo’s slices more than 1 million pieces of Italian beef per day, he added. “We also make our roasted sweet peppers ourselves at the commissaries. Then, once it hits the restaurants, another differentiator is that Portillo’s Italian Beef is served on freshly baked and toasted French bread.” 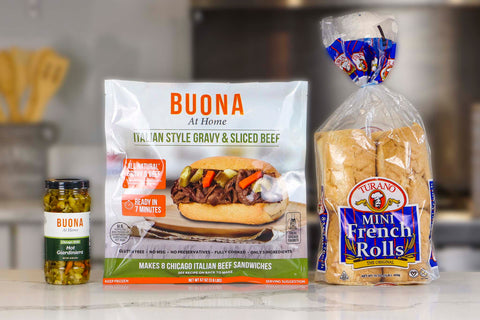 The power of buzz

Like Buona, Portillo’s reports a definite increase in enthusiasm for Italian beef since the debut of The Bear. “But perhaps the biggest sign of the show’s impact on the nation’s zeitgeist is an increased awareness for our Shop & Ship Home Kitchen kit that lets fans enjoy our famous Italian Beef from home,” said Kern.

Buonavolanto also credits The Bear for helping Buona showcase newer menu items, including the restaurant’s saucy beef and mozzarella with marinara and Buona Beef Bites—arancini or rice balls filled with beef and giardiniera.

“We want to present ourselves as a modern Italian beef brand,” he said. Buona also introduced a plant-based Italian beef sandwich earlier this year, that’s available in the stores and on Goldbelly.

The timing of The Bear is also helping Buona’s franchising program, announced pre-Covid but not officially launched until this year. “The show introduced Italian beef to the rest of the U.S. and we’re ready to expand,” said Buonavolanto.