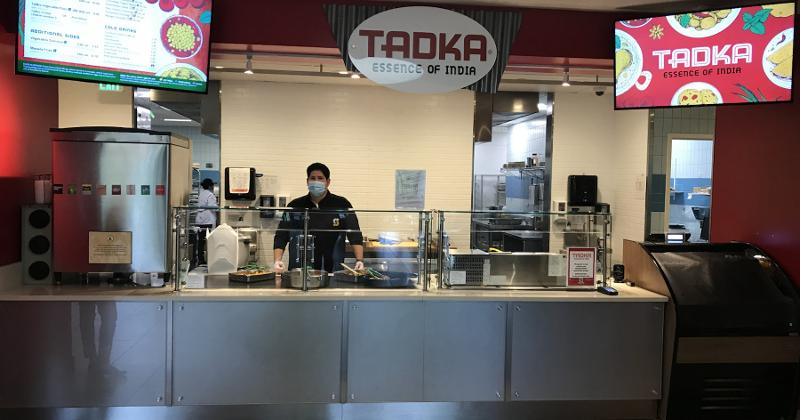 Tadka, Essence of India, is one of three new concepts at Roth Food Court on the Long Island, N.Y., campus of Stony Brook University.

“Student demand for Indian cuisine has been very strong, so when we remodeled Roth Hall, Tadka was part of the plan,” says Peter Klein, CulinArt’s director of culinary development on campus. “We have a large South Asian population of students, many of whom are away from home for the first time. The recipes and ingredients had to be authentic, not fusion.”

So Klein’s team partnered with Kenny Desai, a recent Stony Brook graduate who is currently employed by the university. “She wanted to lend her voice and menu ideas to the concept,” says Klein.

Stony Brook’s finance director, Nidhi Nandwani, who is also of Indian descent, provided menu input and recipes as well. The duo addressed important elements, such as blending of spices, portion sizes and pairing of condiments with dishes.

The menu at Tadka represents the five main regions of India to highlight the diversity of the nation’s cuisine. Dishes include lamb vindaloo, chicken tikka masala, coconut curry fish, samosa chaat masala and several vegetarian options. A number of chutneys and salads are also on offer.

Everything is made from scratch, including the spice blends, dal and chutneys. The only nod to fusion are the masala fries, says Klein. “We season them with chaat masala, a lighter spice blend than garam masala, and they’ve been a big hit.”

Desai and Nandwanit taste-tested the recipes and provided feedback as the menu was developed. Their guidance helped Klein and his team nail authenticity and avoid mistakes. “We developed a spiced yogurt that I thought would work well on the samosa chaat masala, but they pointed out that the dish needs plain yogurt because the recipe already used a lot of spices,” Klein recalls.

Two items that didn’t move were the kati rolls and an Indian grilled cheese sandwich. “We may revisit these as specials, but the students gravitate toward Indian comfort food, like lamb vindaloo and chicken tikka,” says Klein. “We use about 100 pounds of lamb a day for that dish.”

Students can use their meal plans at Takda and the two other new concepts in Roth Food Court—Jet Tila’s Modern Asian Kitchen, which has a Thai-influenced menu, and Mac & Cheesyology, focusing on customizable mac and cheese bowls.