At Lee’s Summit R-7 School District, 2020 was shaping up to be a banner year.

Just two weeks after Nutrition Director Lori Danella proudly presented her team’s accomplishments to the district’s board, the pandemic had firmly landed stateside. She left work on March 13 expecting that schools wouldn’t reopen after spring break, which was the following week.

“I just knew it in my heart,” Danella says. “I spent every waking moment thinking about what we could do. And I’d wake up in the middle of the night, too.”

Danella's hunch was right, but she didn’t know that 2020 would become a year of whiplash-inducing changes evolving from day to day, and sometimes hour to hour.

At the start of the pandemic, Danella and her team didn’t know how exactly they would pull off meal service, but they knew they had to.

Suspending service during the lockdown was never an option in their minds. Not with some students covered under the McKinney-Vento Homeless Assistance Act. Not when they knew school meals were the only meals some of their students received. Not when there was a chance even a single Lee’s Summit R-7 student would go hungry.

“In this ever-changing, uncertain situation, we knew we had to figure out how to get as many meals to the kids as possible,” says Lisa Fiorino, assistant director of operations. “We thought, it would be nice if [a meal] is the one thing they could count on. All of us who work in our department feel that way.”

Even as the pandemic remained a little-understood threat, about 40 of the 175 staff volunteered to prepare and serve meals. Starting on March 23, Danella and her team rolled out curbside pickup. They ransacked the shelf-stable inventory and headed to one of the high schools to pack 2,500 breakfasts and 2,500 lunches per day. Buses loaded up the meals and brought them to district locations and apartment complexes for families to grab. 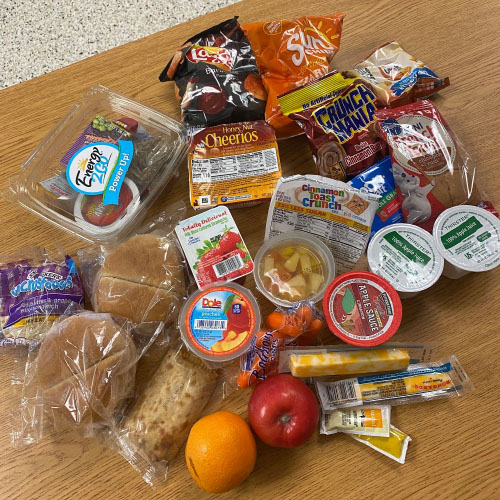 The crew powered through in April and May, averaging 95,000 meals per month, as the country slowly awakened to the fact that the pandemic would last more than a few weeks. “That’s not what our normal [meal pace] would be usually, but we knew we were hitting the kids who really, really, needed it,” Danella says. “Then summer school was supposed to start in June. Well.”

The schools in Lee’s Summit R-7, like much of the country, didn’t open for the summer session. The team worked hard to get the word out about the meals available to any children in the community.

“A lot of parents were saying, ‘Well, someone else might need it more, we’re OK,’” Danella says. “So we got the word out that no, this really is for everyone. People started coming and picking up for other families, and we got to 110,000 meals in June.”

Navigating the ups and downs

The rest of the summer into the fall continued to bring turn-on-a-dime changes.

Summer school began in July, and the team began serving hot meals at six locations while continuing curbside service at eight spots. Starting the regular school year in August seemed less likely by the week, and so the team carried on through delays in August and September, beginning to serve some hot meals as part of the curbside options.

A total of 137,000 meals were served in September, and their efforts continued through October as many grades were still not back to in-person learning,and they served a record 225,000 meals that month.

Fourth through sixth grades came back to school in November. And promptly closed again.

“Another day, another brand-new program,” Danella says. “We just decided, OK, we’ll be packing at three high schools, and each has 15 buses that will be picking up meals that will run routes, stop at bus stops, and get to the children. We’ve sometimes had to change gears within 24 hours.” 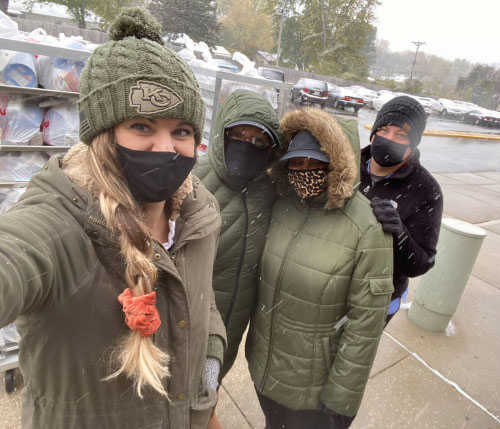 Lee’s Summit R-7 has achieved remarkable feats. But for those operators who may be struggling to keep afloat in the chaos of the year, Fiorino says they are not alone.

“My best advice to keep their focus on the kids out there who really need the support,” Fiorino says. “Even though day to day it can get challenging with the different changes—and sometimes not feeling appreciated by parents or people want things to be perfect—we know we can do our best for the kids who rely on us for meals. At the end of the day, there is always a kid who is so thankful they have that food.”

Danella agrees, noting that people enter the school foodservice field not in pursuit of money but of service to the community: “One of our first days [serving during the pandemic], a mom pulled up with two little ones in the back. She was crying and said, ‘I don’t know what we’d do without you guys.’ That’s what you’re in it for. My heart and soul is in this.”

Nominate an FSO of the Month
coronavirus  COVID_k12

Thinking about the 'what-ifs'

3 ways to boost staff morale as the pandemic continues