While undergoing a large-scale expansion that changed a chunk of its layout and added a new building to campus, Bethany crafted its own cafe—a place where residents and guests of the Waupaca, Wis., senior living center could grab a casual bite throughout the day.

Originally dubbed The Barn because of the area’s affinity for farming, the rustic-themed fast casual took over a space earlier occupied by a great room with a small kitchen, and where resident assistants once served meals. (Now that area is squarely in the purview of foodservice and is staffed by members of the dining team.)

Local pride also inspired the concept’s final menu and design. “We decided that The Barn was a little too vanilla, so we went with the Bleu Barn and played off that by using [blue] in the dining room and incorporating bleu cheese in multiple dishes,” says Josh Eggeman, Bethany’s director of food and beverage at that time. “Cheese is also a pretty big deal up here in Wisconsin, so we felt this was a good fit and unique.” 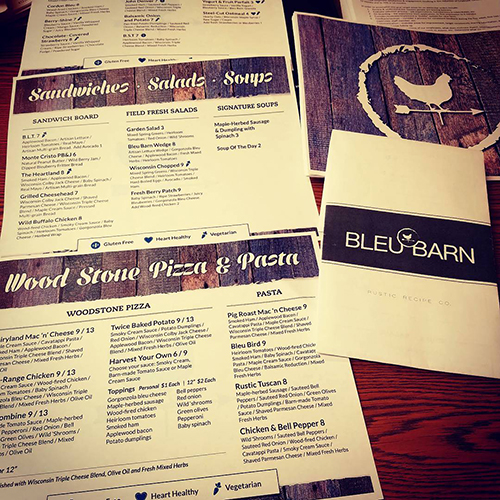 Eggeman fought for a commercial hood in Bleu Barn’s back-of-house area, noting that otherwise the concept could “really only be like a Subway basically.” Because of budget constraints, that meant giving up a new main hood in Bethany’s main kitchen. However, an upgraded hood in the cafe made sense, he says, as it’s allowed more menu flexibility and made-to-order options.

Diners order at the counter from a menu that includes pizzas fired in a wood-stone oven, sandwiches, pasta, frittatas and four kinds of crepes, along with a daily special. Capitalizing on the trend of blurring dayparts, breakfast is served all day at the concept, which opened about a year ago and seats up to 70.

Bringing the outside in

Bleu Barn also boasts a patio and direct access from the outdoors, a feature Eggeman says was nonnegotiable for him when it came to both the fast casual and Bethany’s full-service restaurant, Fireside Grill. “We have people who come in just from the community to come try the food,” he says.

Yet for the time being, marketing isn’t a huge focus for the dining team, with the hope that the food will promote itself. “We tried to set up concepts … that Waupaca doesn’t offer foodservice-wise, that could help draw people in,” Eggeman says. “That wood-stone oven, crepes—there’s no one around here that really does that kind of stuff.”