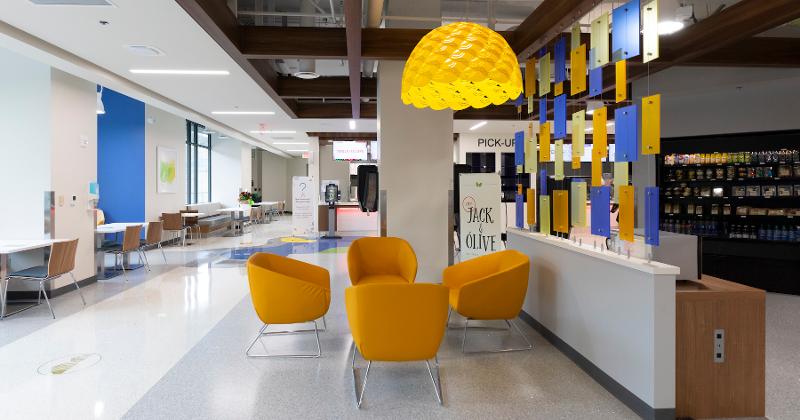 KC Cafe at Children’s Mercy Kansas City has undergone a complete renovation to modernize the space and change it from being child-centric to child-friendly.

Cafe customers are mostly hospital employees and parents of young patients, so the updates better reflect the clientele and offer a respite for weary workers and worried family members. However, there’s still plenty to keep kids happy.

The prior design was more than 20 years old and had a diner theme, with lots of black and white, stainless steel, dark walls and a juke box. The space was starting to get tired and lacked a modern feel,” says Scott Gage, vice president of support services at Children’s Mercy.

Half walls and dividers have come down, opening up the space and allowing natural light to penetrate. Previously, customers entered through a kind of tunnel and only saw the food stations in front of them. Now, they have a view of the entire cafe and seating area as soon as they’re inside.

It also has a much more logical flow, Gage says, more like a food hall, with four serveries grouped around a central area that contains a grab-and-go market, a coffee shop and two Sally the Robot salad vending machines.

Complaints about the former space included that it was over-stimulating, Gage says, “so everything has been ratcheted down.” The terrazzo flooring is white and grey with clusters of color mixed in. It also dictates the flow—white floors designate food areas and grey is for seating.

The hung ceiling has been removed so now customers can see the warm wood ceiling baffles, and walls are painted light colors that reflect the natural light. “It feels much more open, modern and airy now,” Gage says.

The seating areas have been made much more customer-friendly, with tables and chairs no longer screwed to the floor, some booth seating and several soft seating areas.

Two of these areas are designed for teens. Each has a huge colorful chandelier over a cluster of four low chairs that sit around a low table. There are another half-dozen clusters of soft seating spread throughout the cafe, mostly in areas away from regular seating so parents and other adults can have private conversations.

All tables have USB charging ports and electrical hookups, too.

To keep children entertained, video projectors display interactive games and activities on tabletops and there are two bubble walls where kids can use buttons to change light colors. A game is also embedded into the terrazzo flooring. 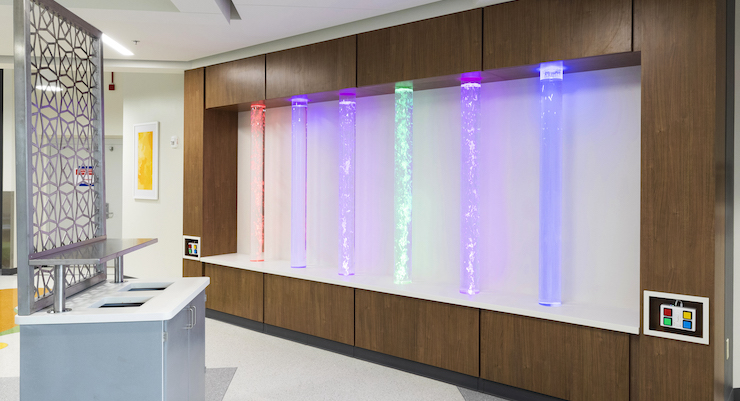 Around eight of the tiles feature brass pictures of Kansas City landmarks, and kids can take a card as they enter the cafe and play “search and find” to discover them all.

The Sally the Robot units dispense salads due to the waning popularity of salad bars in a post-COVID world. However, says Gage, they also help cut labor slightly and are really fun to watch.

“We wanted a solution for people to be able to build their own salads but not take up our server space just for a salad option,” he says. There’s been another benefit to the Sallys: Previously, evening and night workers were unable to get salad because the salad bars were unmanned, and now, they can get a freshly made salad at any time.

Other food choices change regularly at the cafe, where dining is overseen by Morrison Healthcare. There are two fixed stations, Morrison’s Stretched concept (pizza) and Grill & Co. The other two areas rotate between Morrison’s 58 other concepts, which can range from Cauli Club, a root-to-stem station, to Roost (chicken) and The Taco Shoppe. 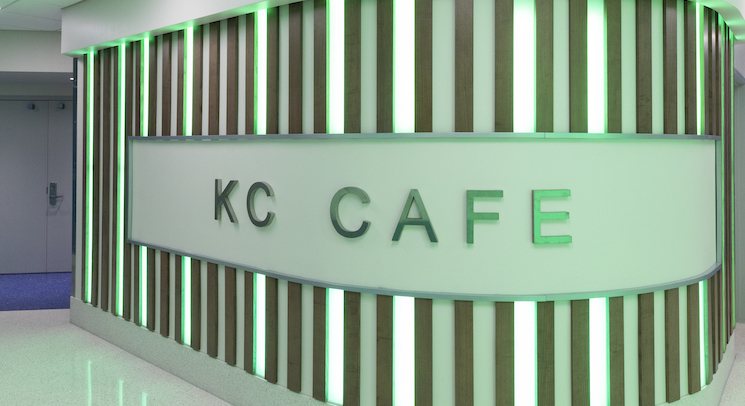 Sometimes Morrison brings in an entire concept and sometimes adds elements of a concept to a station in the form of LTOs, says Chad Crabtree, Morrison regional director of operations.

“We’re trying to really blend several concepts together as we see fit,” he says. “There’s an ebb and flow of brands and we take a lot of feedback and tailor fit our menus. If something doesn’t do well, they either shelve it or switch it up.”