This is the first installment in FSD's latest Anatomy of a Renovation series, which follows the creation of Kansas City Art Institute’s Wylie Dining Center from blueprints to reality.

For several years, the dining hall at the Kansas City Art Institute (KCAI) was stuck in the past.

“The old facility was very cafeteria style-driven,” says Gina Golba, vice president and dean of student affairs at the small college in Kansas City, Mo. “It was kind of like, here's the main line you go down, and there's lots of big casserole types of dishes in front of you for self-service.”

Knowing it was time for an upgrade, KCAI decided to build a facility inside its new $30 million dorm that would showcase modern dining trends and serve as a new focal point on campus.

As a result, the new and improved Wylie Dining Center couldn’t be more different from its predecessor. Featuring a cafe and several micro-restaurants that offer a variety of items such as plant-based pizza made with smoked tofu, the new space is meant to not only draw students and faculty, but also the surrounding Kansas City community.

“This was a major departure for them, creating a destination food hall concept that would attract upper-class students, faculty, administrators, the community at large and the museum district,” says Chris Carvell, owner of Christopher Carvell Architects, one ofthe architectural firms that worked closely with the school to design the new space. 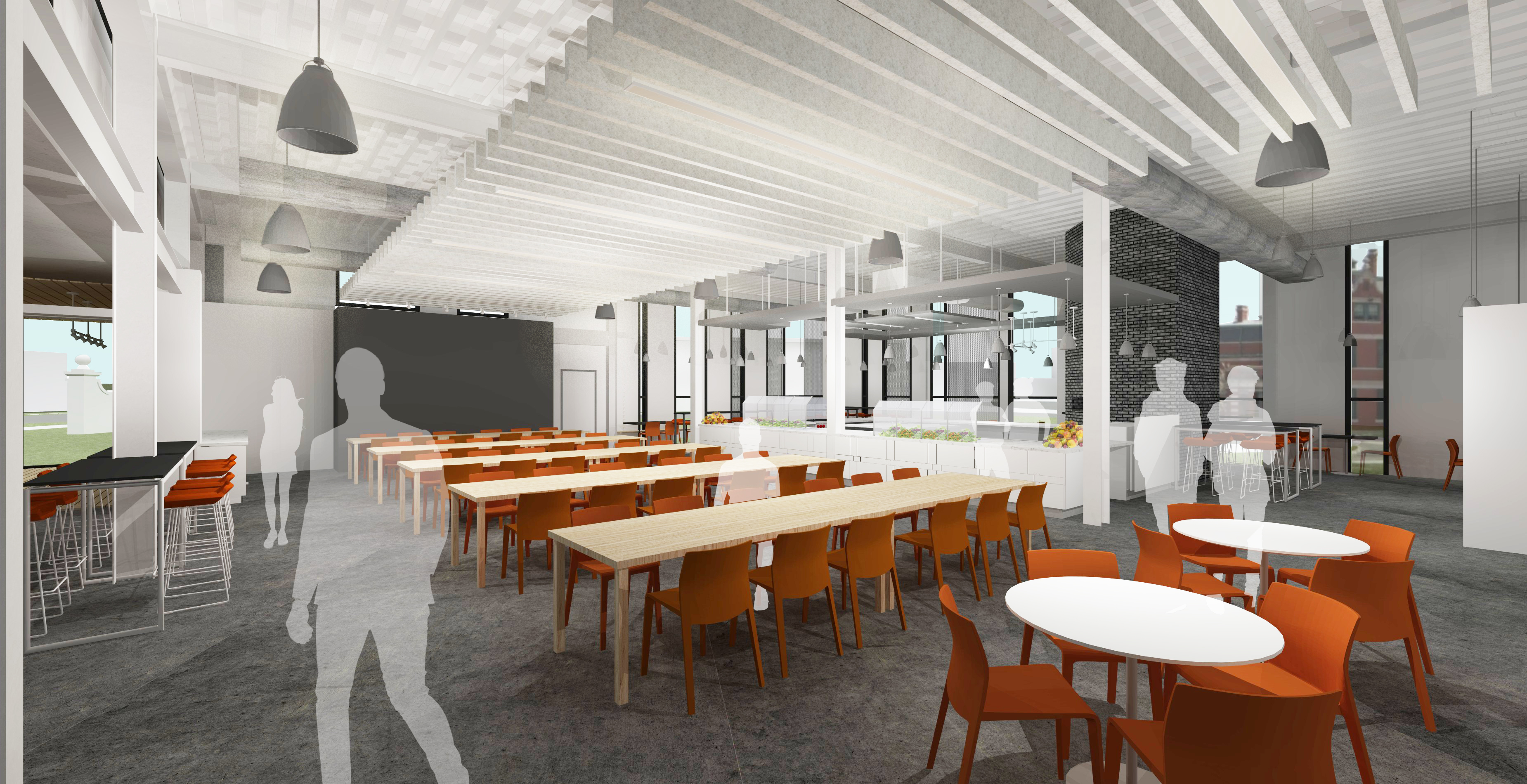 One of the first decisions made when planning the new dining hall was where on the 16-acre campus to put it. School officials decided to position the eatery near the main entrance, making it one of the first things people see when they arrive.

“It is right at the gateway main entrance to campus,” Carvell says. “It’s in your face. That was definitely a conscientious decision.”

Two local museums are also located just outside the campus entrance, and the team hoped the dining hall’s placement would entice patrons to stop in for a bite. “It looks very inviting,” Golba says. “It doesn't feel like you have to wander through the campus to find this elusive dining hall.”

“This was a major departure for them, creating a destination food hall concept that would attract upper-class students, faculty, administrators, the community at large and the museum district.” —Chris Carvell

Next up was crafting the menu. The KCAI team knew from working with foodservice consultants and their contractor that the dining hall would center around micro-restaurants, but they wanted to hear exactly what students wanted from the new space.

Students were surveyed about menu items, dining hours, their living situations and how often they dine on campus, while focus groups provided further feedback. These efforts revealed that students were looking for a mix of plant-based cuisines as well as traditional comfort food.

Building the menus around a variety of healthy and more indulgent options was the easy part, says Director of Dining Albert Macias. The other request from students—having the dining hall open for extended hours—proved to be a little more difficult.

The biggest concern with staying open later was making sure that there would be enough staff and labor dollars to cover the extra hours.

One of the biggest tweaks the team made during the planning process was to extend the hours of Cafe Nerman, the cafe next to the dining hall, rather than the dining hall itself, because the cafe requires fewer staff to operate. Instead of closing at 6 p.m. Monday through Thursday, it’s open until 10. Friday hours were also extended from 4-6 p.m., and the cafe is open on Saturdays from 8:30 a.m. to 2 p.m.

Cafe Nerman offers typical cafe fare such as salads and cold sandwiches, but to help expand the menu during the evening hours, the team designed the building so that the cafe shares a kitchen—and a stove—with the grill concept inside the dining hall.

“Someone can be in the grill making a panini or a croissant sandwich or something like that in the evening after the dining hall has closed, and students can have a hot meal,” Golba says. “What we're trying to do is to entice students to stay on campus rather than going to the local convenience store. We're really trying to cater to them in the evenings to provide either a snack, a beverage or a meal if they want.”

Next up: An in-depth look at the eatery’s micro-restaurants and their offerings.