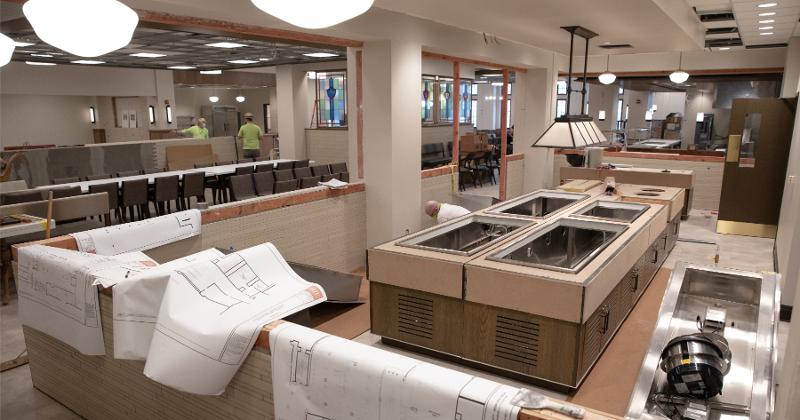 Construction to modernize the food options at Indiana University’s Memorial Union began as a multi-phase project back in 2019.

“Initially, it was supposed to take place and be done, open start to finish, in 14 months,” says Alan Simmerman, project manager for IU Dining. COVID-19, however, had other plans.

“[The team] ran into some delays, and it actually took closer to 18 months, with a couple concepts dragging past that limit,” he says.

As the world shut down in early 2020, the team continued to work on The Union in the hopes of providing students and community members with a new, improved space when they returned to campus.

Due to the pandemic, the team had to quickly change gears. One of the biggest challenges early on was the transition from in-person to virtual meetings.

“Construction meetings are very difficult to do over Zoom, but that was one of the first things we had to figure out was how to do all the construction meetings over Zoom and talk to everybody about design and things like that,” says Executive Director of Dining Rahul Shrivastav.

Another obstacle was the building structure itself.

“The Union as a whole, I believe it's five different buildings that have been joined over the years,” says Simmerman. “So you're talking about a remodel in a very old building that had some antiquated systems that had to be removed."

When the team was installing a range hood, for example, they realized that at some point during the building’s history, an 8-inch water main had been installed. To move forward, they had to reconfigure the space, including the plumbing and the HVAC system.

The architects also had to pay attention to the aesthetic of the new space and make sure that it fit in with the rest of the building.

“There were a lot of sessions on making the feel of the space feel like the building,” says Simmerman. “The building has a certain feel with the limestone work, the terrazzo floors, the limestone walls and carvings, the wide baseboards and certain color schemes.”

The architectural team used old fixtures, glass and more to make the renovated space feel like the rest of the union.

As the architects made progress on the renovation, the dining team worked to develop the menu for each of the concepts in the updated space and to select what equipment would be needed.

Here’s look at each eatery’s menus and notable features.

The focal point of Quarry Pie Company, the union’s pizza concept, is its brick oven.

“It's completely run by dual gas burners, so it's a high temp oven that can operate, depending on what we want to do with it, anywhere between 700 to 900 degrees,” says Simmerman.

The oven allows staff to quickly serve fresh, made-to-order pizza with a variety of toppings. Gluten-free and vegan options are available, and students looking for something other than pizza can also grab salad or pasta.

The space is supported by a dish and prep area shared with neighboring concepts.

“It feels like an old-fashioned burger joint,” says Simmerman.

Equipment at the concept includes a flattop and fryers. Students can grab smash burgers, fried chicken, hot dogs, tater tots, fries and, during breakfast, a variety of egg sandwiches.

This popular concept offers pop-up space for local restaurants, but before the renovation, it had more of a “makeshift setup,” says Shrivastav.

It’s now easier for visiting restaurants to prepare and serve meals, thanks to new equipment such as hot wells and hand sinks. “It’s almost like catering style wherea restaurant can come in and just have a plug and play,” says Simmerman.

For the Union’s Pan-Asian street kitchen concept, the team decided to invest in a variety of equipment, such as woks, a grill and a deep-fryer, and to create a sushi rolling area.

“It's able to handle quite a variety of different Asian styles coming out of it, whether it's Korean stir-fry or or pad Thai,” says Simmerman. “There’s a lot of flexibility in that area.”

The Mix was one of the concepts that was inspired by the team’s travels to Chicago.

It features a hot bar and a cold bar from which students can build their own salads. The space also includes coolers that house grab-and-go options for diners on the run.

“It's like a buffet where food is to go,” says Shrivastav, noting that “it’s easy, quick and fast, and students are loving that stuff.”

Bakery Sugar and Spice is one of the few returning concepts that stayed in the same location.

The renovated space now shares a home with Chocolate Moose, an ice cream concept that was located in a different part of the union.

Diners can stop by for baked goods, ice cream and fresh coffee sourced from a local roaster.

“It's kind of a nice, open to close concept that starts off with breakfast pastries and coffee and then kind of goes throughout the day with dessert,” says Simmerman.

Next up: A look at The Union’s grand opening and the IU community’s response to the new eateries.