What do liquid eggs and tea bags have in common?

Both have been eliminated from the campus of Bennington College to cut down on plastic waste.

For Steve Bohrer, director of dining and executive chef at the Vermont college, the impetus for scrapping those items was two-fold: to slash waste and to educate students.

These are goals for many foodservice operations across the country. Prior to the pandemic, they were making significant moves towards sustainability, and although COVID-19 brought significant changes for everyone, operators are now getting back on track, albeit in different ways.

At Bennington, where Bohrer’s team goes through about 240 dozen eggs per week, the switch from liquid eggs in non-recyclable plastic to shell eggs from a farm 80 miles away “was an increased cost, but it was worth it,” he says.

Tea bags were next to go, due to their microplastics and individual packaging, with dining services opting instead for bulk tea from a local manufacturer.

The team also said farewell to straws, individual potato chip bags; boxed pancake and muffin mixes (opting for scratch-made) and onions in mesh plastic bags (which now come in a carton or box), among other items.

These moves are a start, Bohrer says, but he admits there’s still a way to go.

By 2050, plastic in the oceans will outweigh fish, predicts the Ellen MacArthur Foundation, and the Plastic Planet Coalition reports that American consumers use more than 100 million plastic utensils every day.

Prior to the pandemic, Bohrer removed all single-use to-go packaging from his dining halls. First, he experimented with reusable containers, but students were slow to return them or put them in the trash, so he halted takeout completely.

COVID-19 has forced him to make concessions, however, and now 50% of food on campus is taken out in compostables, a fact Bohrer isn’t crazy about due to the high carbon footprint of manufacturing those types of containers. He says that once the pandemic’s over, he’ll go back to dine-in only.

American consumers use more than 100 million plastic utensils daily, according to the Plastic Planet Coalition.

SUNY New Paltz has also been doing its part. This fall, dining services provided all students with reusable servingware: a meal container, a bowl, a cup and utensils. The initial investment was around $18 per student.

The campus has removed 98% of its single-serve packaging, says Sodexo General Manager Kevin Dicey. And there have been no COVID concerns, he says—in fact, it’s been the opposite: “Students, the university and local health department found our system to be the safest alternative.”

Students return used containers for washing and sanitizing, and receive replacements. “We have had [a] 95% return rate,” Dicey says, adding that students are charged if they lose the items. The biggest challenge, he explains, has been that the reusable forks break, so he’s exploring alternatives.

Another Sodexo account, the University of Vermont in Burlington, launched reusable containers for its mobile orders this fall, and now uses them for 88% of orders.

The biggest challenge, says Marissa Watson, sustainability manager for Sodexo at the university, is getting students to return them, despite the fact that there are some 20 collection stations around campus.

The school should see an ROI on its $25,000 investment in six months, says Lara Seng, sustainable living manager for Sodexo. There are additional costs, too, she points out: washing the reusables and buying drying racks as well as storage and collection bins.

Removing single-use plastic is important on college campuses, as sustainability efforts resonate most with millennials and Gen Z consumers. But other foodservice operators need to be on the ball, too, because these young adults are their current and future customers.

UCSF Health in San Francisco has been using compostable plates for some time and Director of Food and Nutrition Services Dan Henroid found a compostable film to cover them, so customers could see the food inside. The problem now, he says, is the labels. The operation prints its own but they’re not compostable, so he’s looking for an alternative.

Henroid has also changed from plastic to cans and glass bottles for soda, tea, kombucha, cold-brew coffee and coconut water, and switched to water that comes in reusable metal bottles. Since it’s more expensive than plastic bottled waters, he says, he knows he’ll get complaints, though his department has sacrificed its margins and switched to a smaller size to make the product more cost competitive. 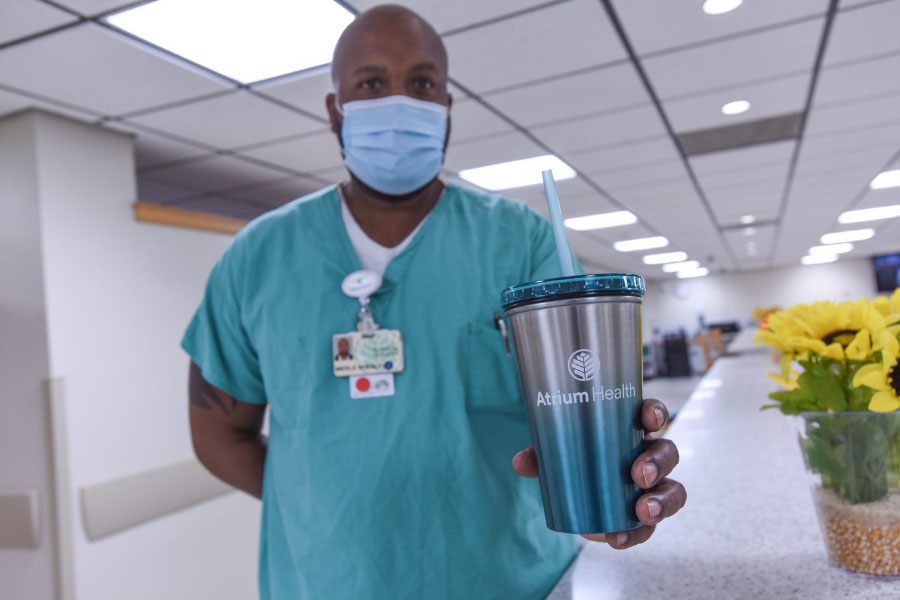 Atrium Health has encouraged the use of reusable water bottles after getting rid of plastic ones at 31 locations; photograph courtesy of Atrium Health

Down the line, Henroid would like to add water stations, preferably with bottle filling sections.

Atrium Health in Charlotte, N.C., has also removed plastic water bottles from 31 sites in North Carolina, which are operated by Morrison Healthcare. “This equates to about 2 million bottles,” says Jennifer Sellers, director of environmental sustainability. Moving forward, the system is looking to replace other single-use plastics, including foam products, food containers, cups, stirrers and straws.

Sellers prefers that Atrium reduce waste overall rather than promote recycling. “We encourage the use of hands-free refillable options, such as reusable (metal) water bottles, refilling stations, and bulk dispensers,” she says. The team has also replaced single-use plastic water bottles with biodegradable cartons derived from plants.

Kisco Senior Living, which has 20 communities in eight states, made the change from polystyrene and other single-use containers to eco-friendly reusables as it switched to 100% room delivery during the pandemic.

Previously, Kisco was spending more than $170,000 monthly on disposable containers and creating more than 3,000 cubic feet of polystyrene waste daily. Though the initial cost of the eco-friendly containers was just over $100,000, Randall Lonoza, director of culinary services for the Carlsbad, Calif.-based company, says he breaks even after just two weeks if they’re used three times a day, adding that “the environmental impact is priceless.”

The biggest challenge, Lonoza says, has been staffing logistics and timing. “It was critical that we communicated delivery and pick-up times to residents, and what the purpose of the containers was: Do not throw away; please return,” he says. 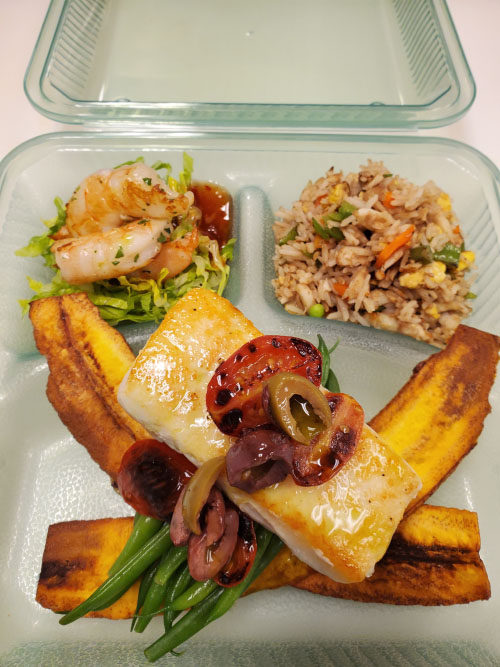 Florida Blue in Jacksonville started switching to compostable containers in early 2019 and now its to-go containers are 100% compostable, including utensils, which were the biggest challenge, says Corporate Hospitality Services Manager Damian Monticello.

The difficulty with cutlery, Monticello says, is that there’s not a lot available, and what is comes in bulk, whereas he was been looking for individually wrapped items.

The big spur to do this was the realization that most waste at the company came from the kitchen and cafeteria. In making the switch, he says, the environment benefits, and so does the foodservice operation, whose reputation gets a boost for doing the right thing.

Getting an early start

The desire to cut plastic starts even earlier than colleges and universities. At the beginning of this school year, Scotia Union Elementary School District in California switched to paper trays instead of using paper bags that went inside plastic bags. It still creates a lot of waste, but much less, says cafeteria manager Gayle McKnight. It’s also faster, she says.

The cost of the trays—34 cents per child, per meal—is within the reimbursement rate, McKnight says.

Quincy Public Schools in Illinois has started using 9-inch square reusable clamshell containers, says Jean Kinder, director of food services. She made the switch due to serving all meals in the classrooms as a result of the pandemic.

Kinder says it will take approximately 87 days of use to recoup the cost of the containers, which was $4 apiece. 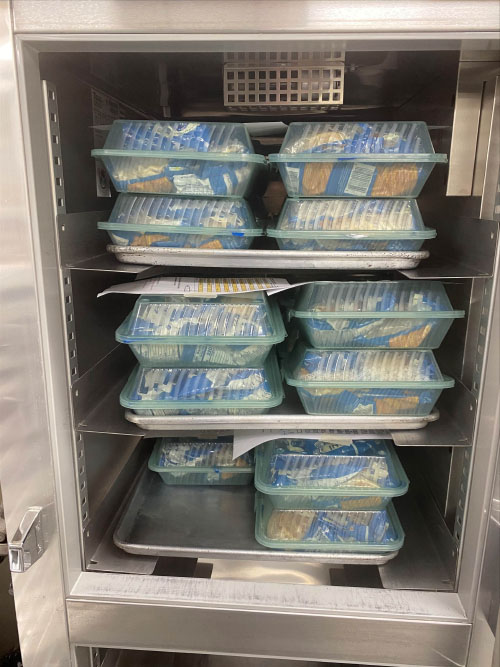 There are the additional dishwashing costs to factor in, she says: “However, since the district was committed to maintaining employment for staff, the labor was a fixed cost, regardless. There would also be additional costs such as trash pickup if we chose to not use washable containers.”

Washing and drying have been the biggest obstacles, she says, since only four clamshells fit into the dishwasher at one time, and the material type means significant drying time. “We’ve had to find different areas with shelves and racks so that the clamshells can dry overnight,” she says.