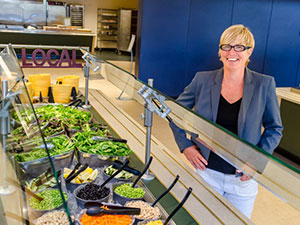 Tasting Table at Ortega 11:45–1. They are serving a delicious roasted mushroom and organic kale pizzette!” read an April 17 Instagram caption posted by @ucsb_res_dining with an appetizing photo.

The day before, similar messages appeared on the University of California, Santa Barbara Residential Dining Services’ Facebook and Twitter accounts, as well as on electronic signage in UCSB’s four dining commons and residence halls. Word spread, and by 11:30 a.m. on the day of the event, students were lined up at Ortega Dining Commons to sample the seasonally inspired off-menu item. Two kitchen managers working the table chatted with students while they plated, answering questions about ingredients and preparation while explaining that the kale came from a farm just 50 miles away.

The UCSB dining event wasn’t always the draw it is today. Director Jill Horst launched Tasting Tables during the 2010–11 school year as a way to test new recipes, offering students sample-size portions of a new dish at one of the dining commons during the lunch or dinner rush. The tastings took place infrequently—a few times a quarter, usually in conjunction with a special occasion like Nutrition Week or Earth Day—and weren’t advertised in advance. As a result, most students didn’t know about Tasting Tables unless they happened to walk by on their way to a meal.

“At first they weren’t really sure, like, ‘What is this? What’s going on?’” says Associate Director of Residential Dining Robbie Wright. “But after the first couple, it definitely became a thing with students. Once people saw it was happening, they started texting each other, ‘You should check it out.’ That’s what we wanted.”

Under Horst’s leadership, Residential Dining Services soon began building a social media presence, boosting its ability to market Tasting Tables. As demand grew, Horst upped the length of the tastings from one to two hours. During the 2012–13 school year, Tasting Tables became weekly events and began rotating through all four dining commons. This past year, the culinary teams at each building took over ownership of the increasingly complex recipes.

These days, lines are a given. Horst also estimates that meal counts at each location where a tasting takes place increase by up to 10 percent during that meal period. But for Horst, who started as an entry-level cook for UCSB Residential Dining Services 20 years ago and has served as director for the past eight, the Tasting Tables are about more than generating buzz: They’re an opportunity to educate.

“The Tasting Tables aren’t meant only as a focus on the food, but also to tell the overall story about the nutritional value of that food, where it came from, when it’s in season, why we have a relationship with this farmer,” she says. 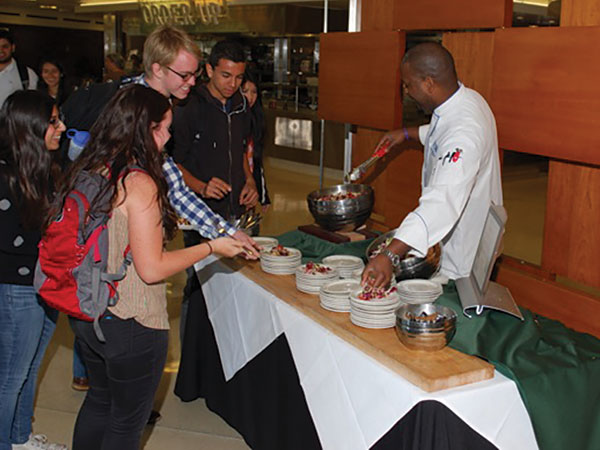 An urge to educate

Educating those around her comes naturally to Horst. Before changing career paths and going to culinary school, she studied to be a high school teacher. Later, when looking to escape the grind of the restaurant and catering scenes, she found herself drawn to the teaching opportunities in the university environment.

“Even though I’m not educating in the classroom, I have the ability to educate anybody who walks through my doors, either about life skills and personal responsibility, or making proper choices around food and nutrition or sustainability,” Horst says.

Environmentalism long has been a focus at UCSB—perhaps not surprising given its location in lush Santa Barbara, affectionately referred to by Horst as “the produce basket of the world.” But Conference Dining Manager Eriko MacDonald credits Horst with taking UCSB’s commitment to the University of California’s sustainability program, which covers all 10 campuses and five medical centers, to the next level.

“Overall, she just has a really strong commitment to quality and sustainability, which is evident everywhere you look,” MacDonald says, pointing to some of the initiatives Horst has implemented during her tenure. These include introducing trayless dining, partnering with the Santa Barbara Sustainable Seafood Program, composting pre- and post-consumer food waste and achieving Green Business Certification for all of UCSB’s dining facilities throughout Santa Barbara County. 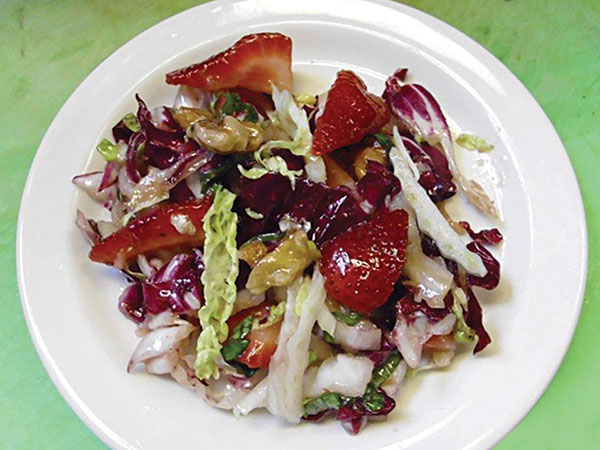 The proof is in the pudding

Wright recalls a recent visit from a local news team doing a story on UCSB receiving national recognition for a sustainability initiative. The reporter randomly stopped students walking around campus to interview them.

“The average student was mentioning that the dining commons were always doing things [related to sustainability],” Wright says. “That’s when I knew we were getting our word out.”

Horst points to another telling clue: In the last six years, Residential Dining Services has seen the number of students voluntarily purchasing off-campus meal plans—those not living in university residence halls choosing to eat in the dining commons—double.

“That means they’re purchasing a meal plan because of the taste and the quality of the food,” Horst says. “To me, that’s a huge measure of success.”