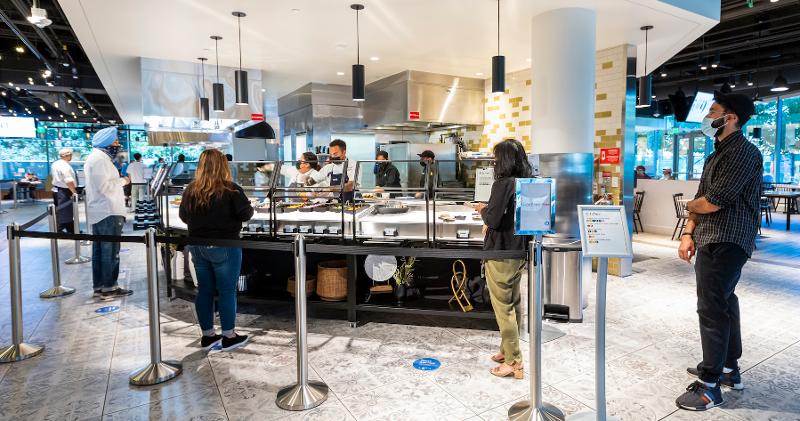 As the head of global food for LinkedIn, a job he’s had since April, Freeman is operating 31 cafeterias across the tech giant’s offices in Sunnyvale, Calif., Singapore, Dublin, Milan, Tokyo and elsewhere. And he’s doing it all out of his home office.

It’s really challenging, Freeman says, but what’s been even harder for him during this pandemic year has been staying home—unable to gather ideas from a restaurant in Spain, an airport in Munich or a Parmesan manufacturing plant in Italy.

“I get fired up because when I go to India or China or Dublin, it gives me an opportunity to understand culture, how it relates to food, what’s going on in the communities around the sites and being able to bring some of that back,” he says. “This [pandemic] is killing me because I can’t see what I’m supposed to see and get the vibe of the cafeterias … and the surrounding areas and everything that goes along with it. So that’s the hardest thing for me, being away from that piece of it.”

Freeman is no stranger to feeding masses of people across myriad locations. Prior to working at LinkedIn, he was the manager of global foodservice strategy at Ford Motor Company and, before that, senior manager of global dining services at Microsoft.

Being at LinkedIn is similar to the latter, he says, because he’s largely feeding a young, tech-savvy crowd that’s willing to embrace anything new.

COVID has not only affected Freeman’s idea-gathering, but also his onboarding at LinkedIn, which has all been done virtually. However, because the company "is owned by Microsoft, a lot of the systems, a lot of the acronyms are the same and a lot of the philosophy and work ethic are there,” he says.

Though services were cut back at most of LinkedIn’s cafes because of COVID, they’ve been resuming as local protocols and regulations allow. Once life returns more to normal, Freeman has big plans for his new role, looking to introduce more authentic global cuisine and bring plant-based foods even more to the fore.

He’ll make this happen, in part, by keeping his ears open. That’s what he did at Microsoft, he says, pitching ideas to team members and then taking in their feedback, and it was his young colleagues who led him to consider things like adding insect protein to the menu.

“That’s the same kind of approach I’ll take at LinkedIn—more listening than talking,” he says. “I need to be able to sit back and take my view out of it.” 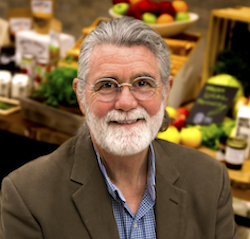 He’s looking to get the chefs very involved as well—to have them out front, sharing their story with customers. “Because of COVID, we’ll see more of that,” he says. “[As] much as I hated the pandemic, some good things came out of it. People have been forced to cook at home and have more appreciation of what chefs do. And that gives us an opportunity for the chefs to engage with the customer at a deeper level.”

Freeman plans to use digital tools to give customers greater transparency around what they’re eating, such as Bluetooth beacons to provide information through smartphones or digital screens in the cafeterias to showcase ingredients and nutrients, the food’s carbon footprint and more.

Customers want to know where food comes from, how farmers take care of their farms and their workers, and whether they practice regenerative agriculture, he says: “There needs to be a story, and [diners] are demanding to know how food is the way it is.”

He’s also relying on LinkedIn’s technology to gather and support communication—and is considering a webpage that will capture feedback and create a method of tracking and understanding how to improve the guest experience in real time.

To keep ahead of the curve, Freeman stays in touch with his peers at colleges and universities around the country, knowing that their current customers will soon be his. “Plant-based is taking over everything in their world, so that’s really been the focus,” he says.

That plant-based ethos ties into sustainability—another big priority at LinkedIn, as many of its employees belong to the Gen Z or Millennial generations. (A recent report from the Pew Research Center shows these age groups are more engaged than others when it comes to taking action around climate change.)

Taming packaging waste is a key part of this, and one that often took the back burner in the industry during COVID as health and safety became concern No. 1. Freeman hopes to mostly serve food and beverages on good, old-fashioned china, and all take-out food at LinkedIn is already served in reusables that come back to the foodservice operation for washing.

He’s looking at the bigger picture, too, hoping to influence manufacturers through his initiatives, with the idea that the combined forces of large companies like LinkedIn could force their hand.

At Microsoft, he points out, his team reached 96% zero waste—and the remaining 4% was food wrappers. “It’s a big deal, and we’re trying to approach zero waste in our cafeteria and in our program [at LinkedIn],” he says. “The manufacturers are slow to get there. That last 4% is the hardest.”

At the end of the day, Freeman’s doing it the Freeman way, which he’s proved works. “It means not looking at innovation the way everyone else does,” he says. “You have to look at it in a different way and disrupt an industry and upend it. That’s what I try to do.”

How to feed employees in the post-pandemic workplace