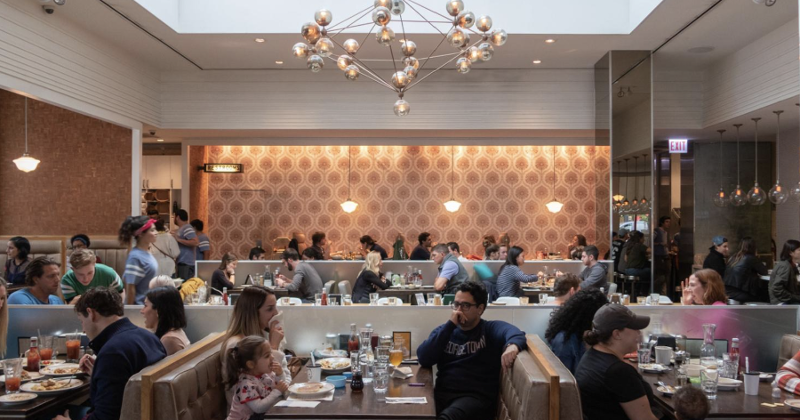 Girl & the Goat in Chicago and Los Angeles are under the Boka Restaurant Group umbrella. / Photo: Shutterstock

Noncommercial foodservice giant Levy has taken a minority stake in the multiconcept Boka Restaurant Group, parent to the Girl & the Goat and other brands.

Both companies are based in Chicago. Levy is known for creating food-and-beverage concepts for entertainment venues and sports stadiums and is a partner of Compass Group North America.

Boka, co-founded by Kevin Boehm and Rob Katz, includes in its portfolio more than 20 concepts in partnership with seven prominent chefs. Boehm and Katz won a James Beard Foundation Award in 2019 for Outstanding Restaurateur.

The group includes Stephanie Izard’s Girl & the Goat in Chicago and Los Angeles, for example, as well as her variations Duck Duck Goat and Little Goat. Izard with Boka also expanded the Peruvian restaurant Cabra in the Hoxton Hotel from Chicago to Los Angeles earlier this year.

And also coming in mid-October to the Hoxton LA is the new Café Basque, which is the group’s first concept with chef Daniel Rose, who is known for Le Coucou in New York City.

Rose is also reportedly planning to open a new brasserie concept called Le Select in Chicago with Boka, which is scheduled to open in December.

And earlier this year, Boka partnered with famed Philadelphia chef and restaurateur Michael Solomonov to bring the popular Israeli skewer house concept Laser Wolf to a Hoxton Hotel in Brooklyn. Solomonov is also known for the Philadelphia restaurant Zahav and other concepts with Steve Cook under the group Cooknsolo.

Boka was founded in 2002 and Boehm and Katz began with their flagship namesake restaurant Boka. Other Boka concepts include the steakhouses GT Prime and Swift & Sons, the high-end Japanese Momotaro, the Italian eatery Alla Vita, the seafood-focused GT Fish & Oyster, the all-day restaurant Cira, along with the cocktail lounge Lady Bird.

“I’ve been a huge fan of Kevin and Rob for a long time, and the more I’ve come to know them, the more impressed I am with what they and their team have built,” said Andy Lansing, CEO of Levy, in a statement. “They are among the best in the business, and I can’t think of a better partner to move forward with as we create the next chapter in our collective stories.”

The companies declined to offer further information for now on what the partnership will bring.

Levy is no stranger to the independent restaurant world.

Founded in 1978 with a deli in Chicago called D.B. Kaplan’s Delicatessen, the company first grew as a multiconcept group, operating restaurants in more than a dozen cities in the U.S. and Canada before moving into arenas and stadiums.

Under the Levy umbrella is Jake Melnick’s Corner Tap and River Roast in Chicago, as well as Paddlefish and Terralina, both at Disney Springs in Florida.

Levy is credited with pioneering fine dining in sports stadiums in 1982 with offerings in Comiskey Park, then the home of the White Sox, later expanding into Wrigley Field.

The company is also known for a data-driven approach and use of technology. Earlier this year, Levy launched a high-tech innovation studio called DBK Studio—named for the original deli— with the goal of partnering with startups and developing new tools for foodservice operations in its venues.