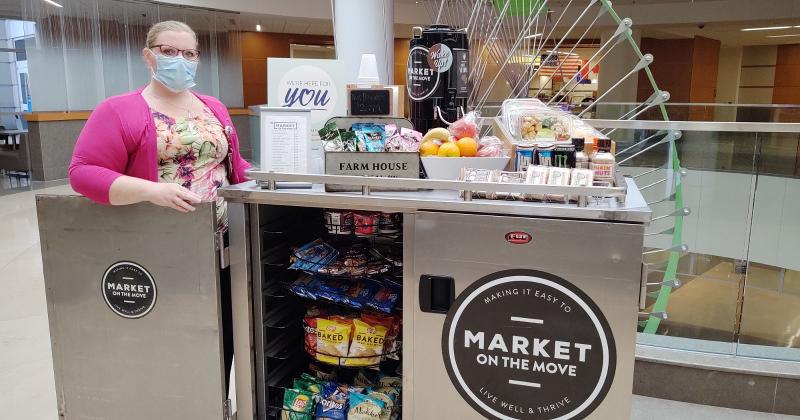 Retail foodservice dollars hit a new low at many healthcare locations across the country this year, as they’ve either been forced to close or seen low participation due to cratering visitor and employee counts during the COVID-19 pandemic.

To cope, JPS Health Network in Fort Worth, Texas, began offering to-go meals from its cafeteria to replace its retail cafe—and is now serving around 130 of them per day. The closure of the retail cafe meant a volume loss of 45% per month in April and May.

“We had to revolutionize our menu because we had such issues with our supply chain,” says Executive Director Neal Lavender. “Our retail cafe manager Bettina Jones and executive chef Russ Persinger had to come up with new things that would be easy for customers to heat up.” Twelve different to-go meals are available for lunch and dinner and include dishes like meatloaf and fajitas. The meals are sold from an express window in the cafeteria, minimizing contact.

Lavender also launched boxes featuring discounted and free produce he receives, offering them to customers at a low cost. He sold these through the express window, too, along with some grocery essentials. The foodservice department added some countertop coolers to house grocery items, making them visible to customers picking up to-go meals, while produce is displayed in baskets and other items are on shelves. 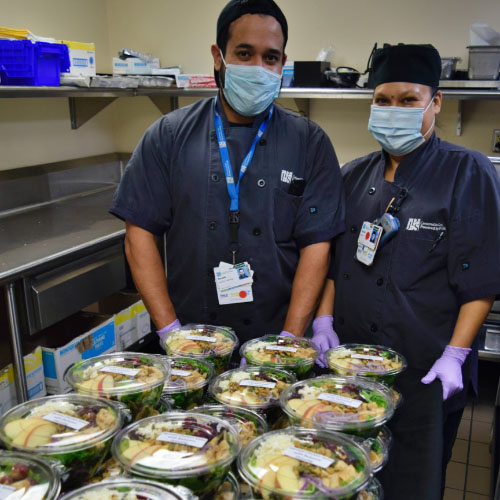 Earlier in the pandemic, JPS offered curbside pickup at key times of the day for more than two months. The program featured a limited menu, including chimichurri flank steak and shrimp jambalaya, along with some grocery items.

“Looking ahead, the long-term effects of the pandemic will be that meals continue to be offered in a to-go box fashion,” Lavender says. “It will be a while before sales go back to normal. Our focus will be to ensure the meals are great tasting, we have plenty of menu variety and get people excited about dining out.”

David Reeves has been the system director for Lee Health in Fort Myers, Fla., since early October, and he is also the healthcare advisory council chair for the International Foodservice Manufacturers Association (IFMA). Through IFMA, he says, he’s heard that most retail locations have seen around a 60% decline in business, though he’s optimistic. “Some are returning to pre-COVID levels and others are now at about 80% of their pre-COVID retail operations,” he says. “In general, the healthcare markets have, from a retail perspective, started to rebound, but from a financial perspective, we are still trying to weather the storm.”

Before Lee Health, Reeves was the director at St. Jude Children’s Research Hospital in Memphis, Tenn., where he established a pop-up market shortly after the pandemic began, in an unused event center. This was for hospital staff only and provided meals for them to take home at the end of their shifts. Staff could order through Grubhub to speed up the process.

“It was a great idea because it protected the safety of the patients and the caregivers,” he says. “We purchased equipment and cashier stations, and they’re still utilizing it and keeping [these orders] separate.”

In the future, Reeves expects to see more contactless equipment such as coffee machines that customers activate through QR codes, as well as touchless silverware dispensers.

“However, we know customers have changed their dining patterns to dining in the home during the pandemic,” he says. “Facilities that can develop quality products that are served through advance ordering, pickup or reheat at home will be ahead of their competition.”

Spectrum Health in Grand Rapids, Mich., is piloting an automated point-of-sale system in a micromart to boost retail revenue during the third shift without using additional labor. The foodservice operation’s retail revenue was down almost 45% at one point during the pandemic, says Kevin Vos, senior director of hospitality support services, though that’s rebounded somewhat, to just 25% down.

With this new system, he’s able to sell pre-packaged items with a bar code and has printed codes for the the top 25 grab-and-go items made in-house such as yogurt parfaits, sandwiches and salads. These are mostly cold products, but some are cooled hot meals that customers can reheat.

"The healthcare markets have, from a retail perspective, started to rebound, but from a financial perspective, we are still trying to weather the storm.”  -David Reeves

This program was in the works at two hospitals pre-COVID, but Vos quickly brought it onboard at six more and thinks it will continue to be viable when the pandemic’s over. The micromarts are open for the 16 hours a day that the cafeterias are closed.

To further boost sales without adding labor, Vos is looking to introduce a salad robot and believes automation will be the way of the future. “Integration of automation into traditional foodservice operations is the best opportunity to increase productivity and efficiency for the future,” he says.

Mobile apps will also be essential to boosting retail sales in the future, he says, and he’s working on his now, expecting to roll it out early next year.

Going to the customer

During the pandemic, Morrison Healthcare has seen retail sales drop overall by around 30%, and in response, it’s launched InstaEat, a mobile-ordering system that’s now in more than 50 Morrison operations, including UK HealthCare on the University of Kentucky campus.

“We’ve had a very slow rollout to make sure we could handle the volume,” says Terri Schnurr, system director of food and nutrition. She’s offering InstaEat for breakfast and lunch and plans to expand into the evening meal and then possibly to 24 hours a day.

Customers pick up their orders at a special area at the entrance to the cafeteria, and Schnurr hopes to launch delivery soon. 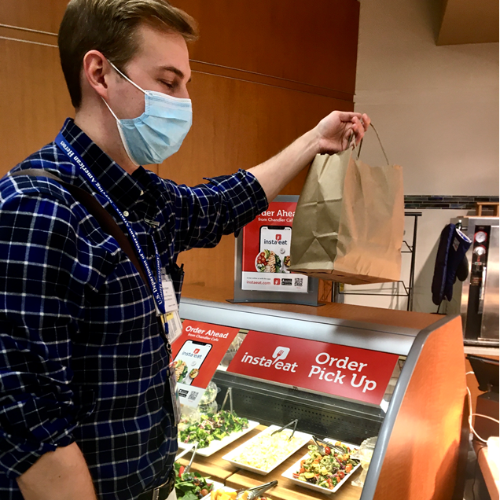 The pandemic has sped up technology use and consumers’ comfort levels with it, says Kevin Dorr, vice president of retail solutions for Morrison.

“This is going to be good for us; we have an opportunity to grow, to connect to people who didn’t have time to come to our cafes,” he says. “Now we have food lockers for contactless pickup or InstaEat so they can get that food delivered. We can wait for the customers to come see us or we can go get them. There’s no silver bullet. We must think differently.”

UK Health Care also recently launched Market on the Move, repurposing patient carts to deliver breakfast and lunch items to hospital employees when they couldn’t leave their units. Offerings include energy bars, pastries, salads, bento boxes and beverages, and the cart sees the most business at lunchtime.

"There’s no silver bullet. We must think differently.”  -Kevin Dorr

While this was intended for hospital workers, many visitors take advantage of it, too. “It is really appreciated in our children’s hospital because parents can wander out and buy something,” Schnurr says. “Or when we’re walking down the hall, people would stop the cart and buy something.”

These carts could ultimately have more uses, Dorr says. They could contain birthday items for employees; balloons and stuffed animals for pediatric patients; and celebratory mother and baby products for the maternity department, he says: “We’re thinking beyond foodservice. If we can find simple ways to delight and surprise, we have a pretty neat opportunity.”

Morrison’s also rolled out meal kits for customers to take home and prepare, featuring chopped and measured ingredients along with a recipe. “People like this, so long as you don’t make them work too hard at it,” he says. Now, the company’s testing DIY kits for families featuring simple items like strawberry shortcakes, s’mores and decorate-your-own cookies.

To keep customers coming to its retail operations, the foodservice team at HCA Palms of Pasadena Hospital in St. Petersburg, Fla., has brought excitement to its cafe after watching its retail revenue drop by 40%.

It’s started offering more action stations such as subs, Caesar salad and stir-fry. “You’ve got to have the excitement because people aren’t going to risk coming out just for a sandwich,” says Director of Food and Nutrition David Hendriks. “Customers like to see action. I have the employee standing there, so I might as well use him.”

Andrew Bergman, manager of foodservice at Waukesha Memorial Hospital in Waukesha, Wis., has similarly sought to build engagement with theme days. Last January, the retail department had been on track to shatter its previous sales records, but by June, sales were down by 60% to 70%.

So Bergman started beefing up his theme days. Staff dress to match the theme, and the menu features special items. A Bucky Badger promo, for example, tied to a local sport team, with staff wearing red and serving dishes such as a Bucky Badger burger and game-day chili.

“We offer comforting food people can [usually] get at the game because no one can actually get to the game,” Bergman says.

“These theme days let customers and staff have some fun,” he says. “It also lets us be creative with the menu and lets us try out LTOs that may or may not make the menu—that helps influence our menus going forward.”