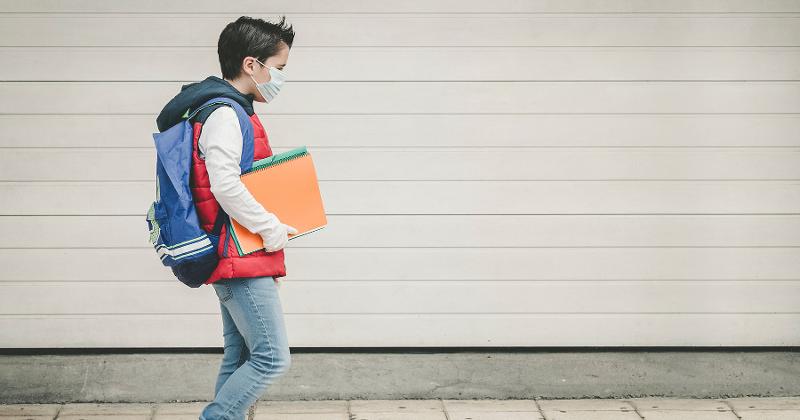 As the upcoming school year looms closer, K-12 operators across the country are working to prepare their plans for the fall. Here’s how three nutrition teams are planning to serve their students this school year.

Sticking to the cafeteria

The nutrition team at Penn-Trafford School District in Harrison City, Pa., will have students eat their meals in the cafeteria this fall, though meal service will look quite different than in the past. Masks, for example, will be mandatory for entry.

“All the students are required to wear a mask while in the cafeteria and in line to check out,” says Food Service Director Meghan Cusack. “They're only permitted to remove it while they're actually seated.”

Decals supplied by Aramark, the district’s foodservice provider, will be displayed throughout the cafeteria to remind students about proper hand-washing and where to stand to maintain social distancing. Elementary students will get their own custom decals featuring Aramark’s mascot, Ace, who will share tips on how to stay safe in the cafeteria in addition to his normal job of promoting healthy eating.

While the menu items themselves will not be different than in a typical school year, they will be served differently.

“A lot of things were designed here to be self-service and more customizable, like toppings stations and a condiments station,” says Cusack. “We, unfortunately, have had to change all of that.”

Now, staff will be the ones placing menu items on trays as well as things like condiments and individually wrapped silverware. Students will only touch a tray once everything is on it and they’re at the register. The district has also installed additional sneeze guards near the serving lines and is hanging Plexiglass windows at the register.

“A lot of things were designed here to be self-service and more customizable, like toppings stations and a condiments station. We, unfortunately, have had to change all of that.” -Meghan Cusack

Due to the additional staff required to run mealtimes, Cusack says that she also is growing her team from 37 staff members to around 45 or 50.

“We work so hard to get [students] to come to the cafeteria and make it a fun environment, something they enjoy so I wanted to keep it as normal as possible,” Cusack says. “All the options are the same. They're just served in a different way.

The district will allow students to pick up meals twice a week (on Tuesdays and Thursdays) and will also be delivering meals to students along bus routes for those who can’t make it to a meal site.

During a typical year, the menu at Rialto is centered around scratch cooking, and Child Nutrition Lead Agent Fausat Rahman-Davies expects that to continue: “We did a survey with some of our kids on Google, and so we’re going to try and incorporate the most popular things they would like to eat.”

Dishes such as orange chicken, turkey with mashed potatoes and gravy, and a crunchy chicken wrap all scored highly with students and will be making an appearance on fall menus.

“In the summer, we could feed the whole community, but we now have to make sure that they're showing us an ID, a student number or a schedule. ... So, to know how many of those kids we’re preparing for is going to be a little bit of a challenge.” -Kristina Krashaar

While some schools may struggle with acquiring products, Child Nutrition Program Innovator Kristina Krashaar says they haven’t run into many issues due to the fact that they make a number of products, such as ranch dressing, in house.

“We're very fortunate to have a central kitchen that allows for us to cook in bulk,” she says,” and then we can distribute out items as necessary to our sites.”

“In the summer, we could feed the whole community, but we now have to make sure that they're showing us an ID, a student number or a schedule—we have to have something to account for that student,” Krashaar says. “So, to know how many of those kids we’re preparing for is going to be a little bit of a challenge.”

Krashaar says that her team has considered doing pre-ordering; however, they’re holding off on that right now. If the team runs into a situation where not as many kids come to pick up meals as anticipated, they’ll focus on marketing the program to parents and guardians.

Heading into the fall, Krashaar’s team has been reaching out to nearby districts and interacting with other K-12 operators online.

“We reach out [via] social media because you can look at stuff from other districts in other states,” says Krashaar. “Maybe they've come up with a procedure that's really good that will help you out. So just being open and flexible, but then, the bottom line too is to remember why we do this—we do it for the kids.”

The foodservice team at Northern Lehigh School Districtin Slatington, Pa., will serve students in a variety of ways depending on their grade level.

Since the district will be implementing new types of meal service, the nutrition team will have to purchase new equipment. Food Service Director Susan Bahnick is waiting to purchase the new items however just in case reopening plans change again before the start of school at the end of the month.

“I'm kind of holding off before I shoot the trigger. I know exactly what my time frame is to get it turned around here in our school district,” she says, adding that she’s looking at equipment such as coolers.

“We're in complete unchartered waters right now. This isn’t anything that any of us have ever gone through." -Susan Bahnick

“My thought is, there'll be one [cooler] for cold, one for hot and then the one on the top will be a case of milk,” Bahnick says. “What we'll do is we'll take each one of the classrooms for the elementary. For the middle school, we'll probably be using Metro carts to transport, and for high school, as of now, they're coming through the cafeteria.”

In an effort to keep costs in check, the menu for all grade levels will be limited, with a choice of a hot item or cold item that students will be able to pre-order. Although it will be simplified, Bahnick says she is determined to make the menu exciting, especially when it comes to things like fresh produce.

“I want to be creative with melons and watermelons and different things like that, so they don't get bored,” she says.

The district has faced some supply chain issues since the start of the pandemic that Bahnick believes could still be a challenge in the fall. “We did have some problems getting some bags and stuff,” she says. “We've been very lucky that the community, grocery stores and that sort of thing have donated bags to us.”

Another potential issue will be if the district reverses course and decides to go back to remote learning, which would cut down the number of staff needed to prepare and run meal service.

“I happen to be a union,” Bahnick says, adding that her staff is contracted to work 180 days each school year. “So, this could be a situation for me where I'm going to have to look into why to make that decision to go whichever direction we go.”

Like Rialto’s foodservice team, Bahnick’s also been reaching out to peers in nearby districts to swap ideas and says that as they head into the new school year, K-12 operators need to be able to rely on each other and take it one day at a time.

“Two things I think we need to keep in mind is patience and flexibility,” she says. “We're in complete unchartered waters right now. This isn’t anything that any of us have ever gone through. So we have to remember that everybody else is in that same body of water. We’re all treading together.”