Grab-and-go options are growing in every operation, but customers are looking for choices that go beyond the same-old sandwiches, salads and packaged snacks. In fact, 29% of consumers overall and 40% of those in the 18-34 age group are looking for ethnic items specifically described as street foods, according to Technomic’s Ethnic Food & Beverage Consumer Trend Report, powered by Ignite. Not only are street foods a staple in many Asian, Latin and Mediterranean countries, they are typically portable and ready to grab-and-go. 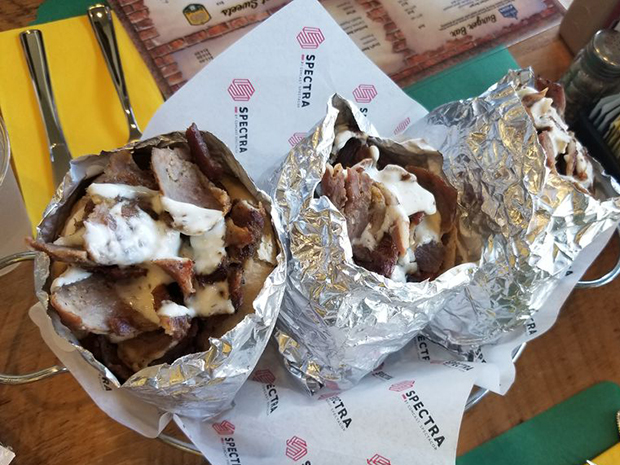 “It’s important that fans have access to food they can carry in one hand while walking with a drink in the other hand,” says Effie Spiegler, executive chef for the Oakland-Alameda County Coliseum, the stadium that Oakland, Calif.’s football and baseball teams both call home. Spiegler aims for handhelds that aren’t messy and don’t require 15 napkins, he says.

In a move to offer more ethnic street food options, the stadium launched a new concept this year called Simply Shawerma. “Shawerma is the No. 1 street food in Germany, where it’s called doner kebab, but we use the Middle Eastern or Turkish name so our customers won’t confuse it with meat on skewers,” he says.

The item is based on seasoned chicken or lamb stacked in a cone shape, which Spiegler sources from a Turkish family company and displays on a vertical spit. To order, the meat is sliced, heated and stuffed into a pita with lettuce, tomato, onions and a housemade ranch aioli. The street food-inspired handheld has been a big hit with customers, which prompted Spectra, the stadium’s foodservice provider, to trademark the Simply Shawerma name with the possibility of replicating with other clients.

Bon Appetit runs the cafes at SAS Institute, a data analytics company based in Cary, N.C. The operation’s executive chef, Bryan Little, is working on expanding the grab-and-go sections. Many of the employees buy lunch and snacks to bring back to their desks. “[Because] we have a large Indian population, I wanted to add more Asian flavors,” he says.

Recently, Little created portable noodle bowls, designed to be eaten cold or hot. The curry noodle bowl with edamame and chickpeas has become a popular option. “Personally, I enjoy it cold, but there are microwaves in all the break rooms so the bowls can easily be heated up,” he says. The bowls are packed in clear round plastic containers with snap-on lids. Little adds a bit more sauce to the mix to prevent the ingredients from drying out during reheating.

On the street at C&U

The new Dim Sum Bar at University of Richmond in Richmond, Va., features authentic Chinese dumplings to go or to stay. The university’s executive chef, Tyler Betzhold, worked with Chinese students during the summer session to get as close to the real thing as possible, he says. The result is a variety of handheld dim sum, such as potstickers filled with pork or vegetables, taro paste buns, red bean cakes, sesame balls and shrimp and chive dumplings. Students can munch on the dumplings while they’re waiting for a dish to be completed at the stir-fry station or panini counter, for example, or they can pack them into to-go boxes to take out.

Next semester, he is debuting a Taco Truck station to give students another street food option. While Americanized tacos have long been available, the new street tacos Betzhold and his team developed are made with fresh corn tortillas and housemade fillings, including chicken tinga, ahi tuna and pork carnitas. Instead of sour cream and shredded cheddar, they will be garnished with real Mexican crema and queso fresco, and served with roasted poblano and pineapple salsa and housemade pickled onions.

“We’re trying to make our ethnic items more authentic and convenient, and street foods are so adaptable to portability,” Betzhold says.