For Instagram influencers, world travelers and celebrity chef Andrew Zimmern, eating bizarre foods is a badge of honor. Weird eaters can attract a lot of followers on social media and high ratings on TV. But these same fans may hesitate to order a far-out ingredient or unfamiliar ethnic cuisine when paying for meals on their own dime.

So how can a concept with a Croatian, Lebanese or Laotian menu build buzz and traffic, and appeal to diners of all sorts? These innovators share some ideas.

In 2016, Edo and Loryn Nalic launched Balkan Treat Box as a food truck in the St. Louis area. “St. Louis has the largest population of Bosnians outside of Bosnia,” says Loryn Nalic, the chef of the husband-wife team. “The city has a lot of traditional mom and pop Balkan restaurants, but I wanted to give the food a contemporary spin—make it inviting while keeping the integrity of the dishes.”

To that end, chef Nalic goes for a visual punch, plating everything with colorful, fresh salads, herbs and housemade sauces, and incorporates wood-fired cooking—part of the Balkan street food experience. Balkan Treat Box also is very active on Instagram, showcasing its eye-catching menu items, and provides lots of education at the register, she says, all of which have turned cautious customers into converts.

But it’s not all about the look of the food. Some of the ingredient names are hard to pronounce and can be intimidating, such as cevapi (grilled beef sausages), pide (a pizza-like flatbread) and pljeskavica (a stuffed burger), Nalic says. But she doesn’t dumb down the menu language: The authentic terms are listed, along with relatable applications.

When Ivan Iricanin opened Ambar in Washington, D.C., in 2013, his goal was to introduce Americans to Serbian food. “It wasn’t very successful at first,” he says, so “I expanded the concept from Serbian to Balkan, which covers a broader area, from Macedonia to Croatia.” Then he borrowed an idea from his native Serbia, where meals are served “little train” style. “Small plates keep coming to the table, like a little train, with guests getting a dish every five minutes,” he explains. His Unlimited Ambar Experience is similar, “a shotgun approach” that gives customers the freedom to order as many small plates as they want for $35 and exposes them to a range of ingredients and flavors.

37% of consumers say they are more adventurous about eating than they were two years ago, per Technomic's Ethnic Food & Beverage Consumer Trend Report.

“Customers get to try a lot of different dishes, and [they] usually like 80% of what they order,” says Iricanin. “About 40% of the menu is traditional and the rest is ‘inspired by tradition’—a bit more cutting edge.” In the former category are zlatibor (a skim milk cheese spread) and stuffed sour cabbage with pork belly, while the latter includes tuna tartare with squid ink butter and pear salsa and almond crusted chicken with walnuts, green apples and wasabi mayo.

The Unlimited Ambar Experience has been big a hit with guests. Plus, its high volume and low margins make it profitable for the restaurant. In mid-2018, Iricanin started an Express Lunch Experience for $19.99, offering a similar wide selection of items coupled with fast service.

Tyler Minnis, executive chef of The Market at Italian Village in Columbus, Ohio, calls his menu “Mediterranean with Midwestern roots,” showcasing cuisines from Sardinia, Greece, Lebanon, Morocco and other countries. The menu focuses on familiar items with a twist, such as biscuits and gravy featuring za’atar in the biscuits and lamb gravy, and Caesar salad tossed with bottarga instead of anchovies.

“Every week, we take servers through the menu so they know what an ingredient is and how it’s prepared,” Minnis says, a process that includes giving servers a glossary of any new or unfamiliar ingredients so they can help guide guests. “They taste it, get the glossary and then take a quiz.”

But the chef really lets loose on No Menu Mondays—the night on which he creates a menu on the spot. This gives him a chance to introduce esoteric ingredients such as sweetbreads, which he prepares with a Buffalo-style sauce, and duck confit arancini, tweaking the traditional Italian stuffed fried rice balls with a chef-inspired ingredient. Through server education, customers learn to trust the chef, and No Menu Mondays now have a cult following, Minnis says, with a lot of regulars coming in to try something new.

At Sodexo’s dining operations at Fannie Mae’s offices in Washington D.C. and Northern Virginia, Director of Culinary Gervais Achstetter says that “customization is the key to success” when debuting new flavors. “But I try not to overwhelm [guests] with too many choices, or they’ll walk away,” she says.

“You have to give new ethnic ingredients a chance to fly.” —Gervais Achstetter

At a recently added Asian noodle station, Achstetter offered three to four housemade sauces, giving guests a chance to experiment. In tandem with the launch, she gave out free sauce samples and promoted the station on social media. “Word spread, and once people tasted the sauces, the station caught on,” Achstetter says. “You have to give new ethnic ingredients a chance to fly.”

Her strategy for new ethnic concepts? Educate, sample and launch. And if there’s a large population of international customers at an operation, offer foods that evoke authenticity and nostalgia, such as Indian breads and Chinese dumplings.

Venezuelan-born Enrique Limardo, the chef at Washington, D.C.’s award-winning fine-dining restaurant, Seven Reasons, has moved into the fast-casual segment with Immigrant Food, a new concept one block from the White House. Bowls—a popular platform—are the vehicle for showcasing the culinary legacy of America’s immigrants. 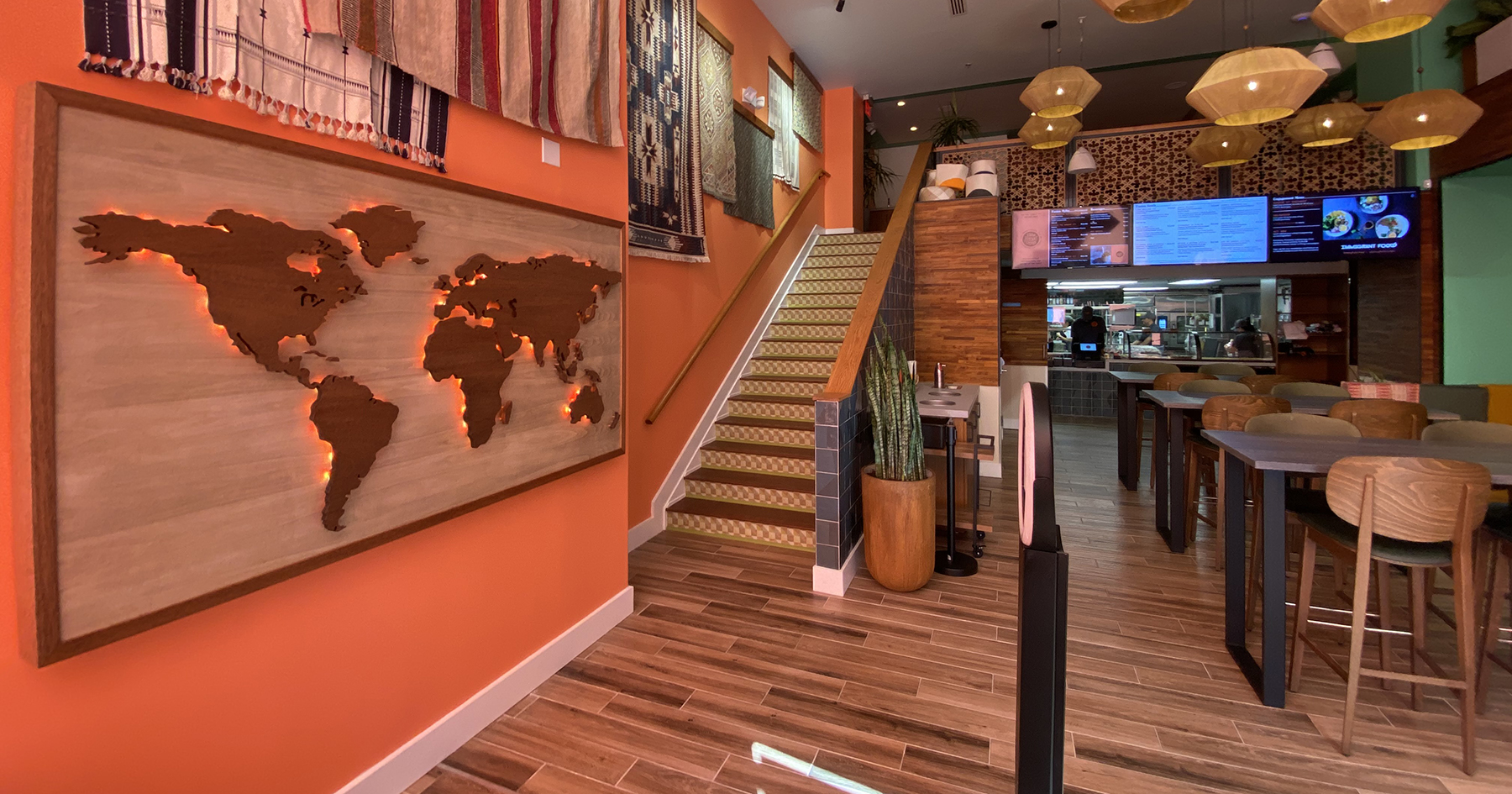 The menu brings lesser-known ingredients to the mainstream in combinations such as the Filipino Rice and Grains bowl, inspired by immigrants from the Philippines and sub-Saharan Africa. It features adobo spiced chicken, arugula, spinach, orange coconut rice, toasted quinoa, tomatoes, green onion and cauliflower with pickled banana—a mix of familiar and unfamiliar ingredients with global flavors. The Viet Vibes bowl is a hybrid of Vietnamese and Caribbean influences, with chicken, spicy rice noodles, jalapenos, mango cubes, garlic coconut chips, sprouts, peanuts and a pho vinaigrette. The menu description of each bowl tells the story of its culinary roots and explains the ingredients in great detail.

“Bowls provide an opportunity to try a lot of different flavors and cuisines,” says Peter Schechter, co-founder of Immigrant Food. But Limardo and Schechter are taking their mission beyond the menu by creating what they call a “cause casual” concept that celebrates diversity through an immersive experience. The restaurant plays immigrant music, displays immigrants’ artwork and provides meeting space for immigrant advocacy groups.

Plus, an “engagement menu” positioned next to the digital food menu encourages volunteering and donations to five local nonprofits. Social media supports the mission, and within weeks of opening, the restaurant had thousands of Instagram followers. Immigrant Food gets customers on board by relating to a cause as well as its food.

What consumers want for breakfast