Three years ago à la carte items were given a makeover at 33,500-student Cincinnati Public Schools. “We saw the writing on the wall,” says Jessica Shelly, food services director, about impending federal regulations regarding competitive foods. 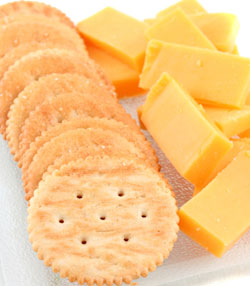 The department made a conscious effort to push high school students away from purchasing à la carte items and toward reimbursable meals. This was done through bundling of items. “We said, ‘If you want a burger or pizza, grab a fruit, go through the salad bar and take a milk to make it a meal,’” Shelly says.

The department also restricted what items could be sold in à la carte lines at the high schools, focusing on items that are healthier, such as baked chips, zero-calorie flavored water and low-calorie sports drinks.

À la carte revenue dropped, but Shelly says the district has more than made up for lost money through an increase in the number of reimbursable meals it now sells. “The district is 74% free and reduced,” she says. “À la carte used to be our bread and butter.” Since the à la carte changes, high school participation increased from 45% to 68%.

Shelly thinks the proposed USDA competitive foods regs released earlier this month are a good step for schools to make. She noted that many districts, including hers, have already implemented stricter standards than some of those proposed by the USDA. (For more on the proposed regs, click here.) She does take issue with a few of the individual requirements, however.

One of the areas Shelly is concerned with is allowing caffeinated beverages in the high schools. Shelly does not allow caffeinated beverages to be sold in her schools, but the USDA’s proposed rules allow these beverages to be sold, although not during meal times. Shelly’s fear is that students “will be walking down the hall with a 20-ounce, zero-calorie energy drink that is highly caffeinated,” which she doesn’t think schools should be serving to students.

However, Shelly would not be required to offer such energy drinks, because the proposed USDA rules allow for districts to implement stricter standards.

Another area that concerns Shelly is the requirement that certain beverages, such as zero-calorie flavored waters, cannot be sold during meal periods. Flavored water is her biggest seller in the high schools. Shelly agrees that non-foodservice-operated vending machines and school stores should not be allowed to serve the item during meal times, but thinks foodservice-operated machines and stores should be allowed to sell them, because they are a valuable revenue source.

“These sales provide the funds for me to provide better school lunches for the kids,” she says. “They fund salad bars and whole-grain items, which tend to be more expensive. I am very worried about losing à la carte sales. If we don’t offer the kids choices they will go off campus to get them, and they won’t be healthier options. If we don’t offer the flavored water, kids will not replace it with plain water.”

Shelly does believe that implementation of this set of rules will be smoother than was last year’s meal pattern rules. “We’ve all had experience going through this last year,” she notes. “The USDA really listened to us and vendors have experienced this as well, so it will be easier than last year.”

Billy Reid, director of child nutrition services for Salida (Calif.) Union School District is not concerned about the new requirements because his district stopped serving competitive foods four years ago to shift students toward reimbursable meals. However, Reid also provides the meals for a nearby district, Stanislaus Unified School District, which has school stores that are run by parent-teacher organizations. Under the new rules, these stores would be required to meet the new food and beverage standards. “I did tell the group that if there’s an audit and something is wrong, that is a finding on my foodservice audit,” Reid explains. “I’m not too worried. I just offered them my help [to comply with the new regs].

“These stores fund after-school activities and athletics,” he adds. “They might have to find different revenue sources [for these programs after the new rules are implemented].”

Melanie Konarik, director of child nutrition for the Spring Independent School District in Houston, says she hasn’t had enough time to devote to the new requirements because she’s been focusing on the new breakfast components of the meal regs, which go into effect this fall.

But Konarik is concerned about the rule’s exemption for fundraisers. She says the vagueness of how many exemptions would be allowed under the rules is worrisome. The Texas Department of Agriculture, which administers the state’s school meals program, allows three exemptions in a school year and the department suggests that these exempted activities take place after lunch so as not to cannibalize lunch participation. “With the new meal regs from last year, we have more booster clubs selling [things like candy] in the hallways,” she says. “I’m concerned about the word ‘occasionally’ in the proposed regs. What does that mean?”

Some Schools to Take Heavy Hit From Competitive Food Regs