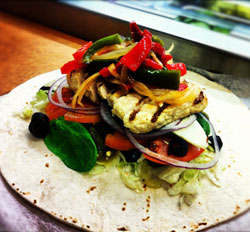 Axworthy has been with the district since September 2012. This is the first school district he’s worked in. About 90% of the menu items are currently made from scratch. Axworthy says sliced bread is the main item the district isn’t making in house. This year the district compartmentalized its production. The department didn’t have the money to create a central kitchen. Instead it took several kitchens at schools and made them into mini central kitchens. For example, all produce for the schools is cleaned, processed and sent out to the other 64 sites in the district from one of the kitchens. There are two kitchens for entrées, and one kitchen for a bakery. Axworthy says this compartmentalized approach helps the department be more efficient with the resources it has.

Trends: “Scratch cooking, of course, is on everybody’s minds. Institutional foodservice operations really need to develop a five-year plan to implement timetables in order to gradually move toward a complete scratch cooking operation and eliminate processed foods altogether, thereby eliminating those preservatives, high-fat, high-sugar items that you really see in our culture today.

“Another trend is upgrading service areas, especially for secondary schools. Students are commercialized. They are used to fast food and dining out and that’s what they are looking for. Schools are doing what many colleges have done with going to scatter systems and making things to order in small batches, like stir-fries.”

Meal regs: “Part of the reason why I decided to come to a school district is because of The Good Food Project in D-11. It’s a set of values and policies that we have as a district to provide healthy, sustainable meals, foods that don’t have extra antibiotics or hormones and foods that bypass the 51% whole-grain products requirement. We use local whenever possible and foods without high fructose corn syrup, artificial flavors or dyes. All of these policies that we have really drive what we do. Because of those policies we are way ahead of USDA. There really aren’t a lot of menu changes that we have to go through for next year. That means we can jump ahead and be on their second tier and start looking at reducing our sodium level more. We’re looking pretty good.”

New menu items: The district added paninis this year at the high school. Next year Axworthy will take the bean and cheese burrito and tweak it. Instead of using commodity beans, like he currently uses, he will use a local dried bean, which he says will help him reduce the sodium content.

This is Faith’s first venture in a school district. He started with Columbia six months ago. He says the department’s goal is to produce most items at a central location to prepare fresher foods.

Trends: “I’ve done a lot of talking with the students at the schools. If there is one thing I’m surprised a little bit about it’s the desire for more ethnic foods other than what you might stereotypically peg on students. I’m trying to focus on giving them a mix of comfort foods and at the same time venture outside their comfort zone to see what they have an interest in.

I try to gather where students stand on fresh vegetables and fruits and ways that I can better their salad bars. I try to find out if there are things that I can do to increase the amount of fruits and vegetables that they put on their trays.”

Faith is trying to increase produce consumption by incorporating vegetables into entrées, either within the items themselves, in sauces or by having a veggie side included with the entrée.

Meal regs: “We’re in pretty good shape. I try to provide a good portion of lean protein, vegetables, as little fat as possible and an item that kids will eat. I don’t focus necessarily on how healthy of an item can I put on a child’s tray but are they going to put it in their mouth.

“We’re experimenting with oven-baked chicken that is similar to fried chicken but much less fat, and Oriental items like orange chicken. I’m trying to introduce brown rice.

“Whole grains and legumes will be the hardest item to get into the students’ diet. I don’t think it’s too hard to find ways to get fruits and vegetables into their diets, but it is to a certain degree to get peas and beans and whole grains into them.”

Burke has been with the district for seven years. He says the district’s approach to food is clean labels and going back to the basics. “Instead of trying to disguise the food or do all this different stuff, it’s basically raw products or items that are steamed, items that are farm to table, locally grown and don’t have things added to it. We’re not doing casseroles and things like that anymore. We’re doing roasted chicken. Instead of having items that have a lot of ingredients on the list, we’re having items that have a lot less on the list.”

Trends: “Ethnic foods are hot, especially Asian. Greek is picking up. Some Mediterranean items like flatbreads, hummus and gyros are up and coming. Thai and noddle-based items are becoming popular.

“Another item is hot sandwiches. People aren’t going to get burgers anymore. They are going to sandwich shops now.”

Burke says some students ask for healthy items, but it depends on the age group. “Middle school kids want fast food, breaded or crunchy, fried, and starchy items. High school, they do want to start knowing what they are eating and what is healthy. For elementary school, we do everything for them. W have healthier versions of things they love, like pizza with turkey pepperoni, whole-wheat crust, low fat cheese.”

Meal regs: “The biggest challenge is the bread. We’ve had pretty much everything else covered. We make our bread from scratch. We met the 51% whole-grain requirements. But now we’re going to have to change the size of bread and limit variety to meet the new meal regs.”

Burkes says sodium is a challenge, but not in the department’s efforts to reduce salt. “The biggest challenge with sodium is there is no regulation for the private sector so there is no transition. Students eat at home and fast food restaurants, so high sodium is what they are used to. Our food to them is going to taste very bland. That hurts us.”

Huff has been with the district for one year. He was initially hired as a consultant for a new high school that will open this fall.

Trends: “I think the chef-to-school movement is just starting and is going to get bigger. I’m seeing a lot of chefs from my background, which is in the restaurant world, making that change. I think a lot of chefs are taking what a la carte and full-service experience they have and they are trying to apply it to batch cooking without losing that made-from scratch, locally used products [aspect] and figure out a way to make it presentable and taste good for kids of all ages. And to keep it in the nutritional value that it has to be. It’s a challenge, having been a chef, to not be able to sit down and cook whatever you want with as much butter as you want to. It’s a neat challenge. It’s a learning experience.”

New items: “We have a new sweet potato side. We source from a local farm. It’s a simple recipe. We peel and dice, and instead of blanching ahead of time, I toss them in a honey, brown sugar and a little chili pepper to add a little flavor. Then I roast them. Other than a little oil and the sugar coming out of it, it’s basically a very simple recipe that doesn’t have too many steps.

“Another is salsa. The trick I learned when I was in Mexico was roasting the vegetables. I mix one can of tomatoes in with five pounds of fresh tomatoes and then roast the onion and other aromatics and that brings out the natural sugar in the tomato and onion. Then we pour everything in a blender, add seasonings and blend it. You can take out the canned tomatoes if you want to. I put it in there to utilize what we had in stock.

“Fajita vegetables is something I made up for the deli we just opened in the high school. It’s kind of like a Subway. I julienne all the vegetables and toss those in the same garlic butter. Then we lay it out on sheet pans and add some taco seasoning to it and then throw it in the oven and roast them. They are prebaked. We cool them down and use it for a vegetarian offering. It turns out all the kids are adding it to their meat sandwiches as a topping. It’s versatile. It’s premade so it’s almost like a chutney without the ginger. It goes great on top of a grilled chicken or steak. It can also be used as a salad topper. It has a lot of options.”

Wright has been with the district since 2009. She has helped develop quick scratch, a method of cooking where the district purchases precooked, plain, proteins to use in their housemade dishes.

Trends: “I think that our kids are becoming more aware of eating healthy and having healthier choices available to them. I think that their palates are more established. They have a better sense of what they like and don’t like. I think they have a lot more exposure to foods and products. I think there is an awareness around local products.”

Challenges: The biggest challenge is the limited funding. We have to really get creative and do what we can with what we have in the pantry, so to speak.”

New items: “We will continue our efforts in cook from scratch. We will menu more turkey burgers in an attempt to be a more health-conscious program. I’m working on a lot of different recipes where the fruit or vegetable is included in the recipe. There will be a little bit of an overhaul of our menus.”