It costs more to raise old-fashioned breeds, but chefs gladly fork over more cash for the characteristic flavor, fat and texture of heritage pork. “Pork shouldn’t be flavorless and pasty gray,” says Kelley Escobedo, who along with her husband, Nick, owns and operates South Texas Heritage Pork, in Floresville, raising rare breeds of pigs whose lineage dates back to the 16th century. “These animals were designed to forage for their food and store fats intramuscularly, resulting in well-marbled, delicious pork products.” 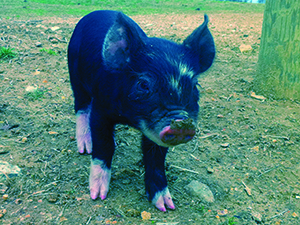 Other farmers also are raising hogs bred for enhanced culinary applications. David Newman, co-owner and operator of Newman Farm, in Myrtle, Mo., raises Berkshire hogs. His family’s farm focuses on quality instead of quantity. “Our customers are primarily chefs, who utilize the entire hog from nose to tail. Often the quality of the fat is as prized as the lean, perfect for specialty items like charcuterie,” Newman says.

Jennifer Small, farmer and owner of Flying Pigs Farm, in Shushan, N.Y., says pastry chefs covet the high-quality leaf lard available from her animals because of the lard’s ability to create a moist, flaky consistency in baked goods. Small’s husband, Michael Yezzi, says, “We raise fairy-tale looking pink pigs with black spots called Gloucestershire Old Spot, a red-haired, hardy breed called Tamworth, Large Blacks, Ossabaws and crosses of those four. Some of these rare, purebred breeds have worldwide populations between 2,000 and 5,000, in comparison to the 120 to 130 million factory-farmed pigs raised in the U.S. each year.”

The hogs at Flying Pigs Farm haven’t been leaned out or standardized for the industrial model and thrive outdoors year-around with access to insulated huts. Yezzi says the minerals the pigs pick up while foraging in the soil improve flavor, and exercise imparts a beautiful color to the pork.

But pigs really do pig out, and natural habitat isn’t enough to sustain them. “We feed, feed and feed,” Newman says. “We can easily invest $500 per head in food and essentials by the time we go to market.”

Each hog typically eats three to five pounds of feed a day. Whereas corn-based products are 10 to 20 cents per pound, Escobedo custom mills peanut-based feed on site at 80 cents to $1.25 per pound, which she says enhances her pork’s flavor and nutritional value. Escobedo also uses seasonal, non-GMO grains, grasses and legumes from local farmers for the feed. “Pigs absorb flavor based on what they eat, in as little as four to five weeks of feeding,” Escobedo says. “Chefs plan around the pork’s flavor profile, based on the nutty sweetness of peanuts or smooth creamy fat of avocado fed to the pig.”

Yezzi also is keeping a close eye on his feed. “[Hogs’] main diet is purchased feed, and increases in fuel, corn and feed prices has affected me,” Yezzi says. “I’ve had to pass some of that cost on through price increases.”