Bon Appetit Management Company launched a new program at the University of Chicago to feed quarantined students with food allergies, and it’s proved so successful that it’s rolling out to colleges nationwide.

SimplyOASIS offers meals free from all of the eight major allergens, plus gluten. They’re the default meals served to students when they’re initially quarantined, just in case they have allergies, though they can later opt out of them.

To Bon Appetit’s surprise, the meals were so well-liked that even students without allergies started requesting them.

At the beginning of the fall semester, the university had 991 students in quarantine due to taking extra measures based on where they came to the university from, especially from COVID-19 hotspots. As the semester continued, numbers dropped to just students who’d been exposed to the virus or had symptoms “and about 5% of those had the SimplyOASIS meals, which corresponds to the number who report allergies in the general student population,” says Terri Brownlee, director of nutrition and wellness for Bon Appetit.

However, the number of quarantined students requesting these meals increased to 20%.

Meals served through the SimplyOASIS program include turkey cacciatore with spaghetti and roasted vegetables, and an ancho-roasted corn and black bean spinach bowl with sweet pepper salsa, radishes and crisp corn tortilla strips. Using “Simply” in the program’s name reflects that the foods used are all single-ingredient products, with nothing packaged or processed, since manufacturers can shift ingredient lists without notice, she says.

“Our Bon Appetit wellness chef and dietitian at the University of Chicago worked closely with the recipes and the meals to make sure they were visually appealing, held for delivery and were satisfying from a portion standpoint,” Brownlee says. 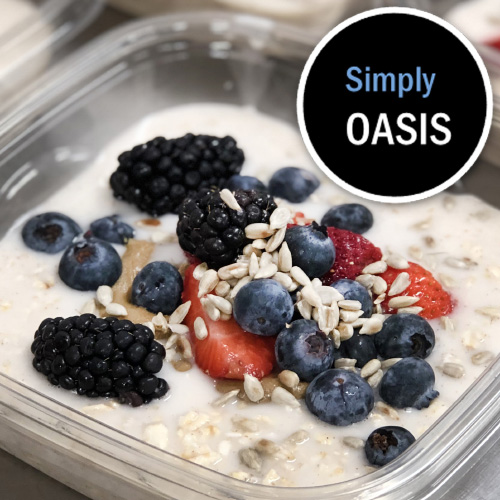 While offering meals free of this many allergens certainly requires much research and recipe testing, in the long run it makes chefs’ lives easier, she adds. This is because instead of preparing different meals—dairy free, peanut free, etc.— and sanitizing stations in between each, these meals satisfy most students with allergies. “This really streamlined it,” she says. “The recipe development was trickier, but we looked at it as what is available, rather than what are we taking away, and our chefs viewed it like a Food Network challenge.”

Bon Appetit plans for SimplyOASIS to become part of standard campus fare once life returns to normal, post-pandemic, and it will go into retail and residential dining as well as catering. At the University of Chicago, they’ll first go into residential dining, “but I have a feeling it will easily make its way into retail,” Brownlee says. The meals will be clearly marked with the program’s name and logo “to make it easy for students to identify them,” she adds. “This is somewhere they can go for safe meals.”

To help with the rollout, Brownlee created an implementation guide that includes the approved ingredient list, an inspirational guide with recipe ideas, and a list of food categories that might be challenging to procure. Bon Appetit prefers to give chefs free rein to create their own recipes, “which spurs their creativity,” she says. “We’re not a recipe-driven company so it’s really important to give our chefs some guidelines and some things to start with, and they can spin off from there.”

Some chefs find it hard to imagine how foods could be delicious without the allergens, she says, but most “have been thrilled to have something new to work on.” In addition, the company has written case studies to show how the program works and is looking to set up mentoring between campuses.

Overall, she says, it’s been good for the chefs: “It allows them to be excited about this, and we consider it part of their professional development.”