That’s the Dalai Lama quote that has guided Michael Rosenberger’s leadership at Dallas Independent School District during the COVID era.

It’s also the philosophy that has informed the foodservice team’s approach to moving forward—a combination of getting back to pre-COVID fundamentals like scratch cooking and implementing brand-new programs with an eye toward the future.

“[That quote is] really one of my foundational beliefs, and I’ve tried to incorporate it over the last few years,” says Rosenberger, the district's executive director of food and nutrition services. “Like, the supply chain is what it is, and I can’t control that. But what I can control is figuring out what we have a good supply of and how we can build menus around that.”

The simplicity of that statement belies the reality of what it meant to keep serving a diverse, populous district like Dallas ISD—which enrolls 140,670 students across more than 230 locations—during the peak of the pandemic. The team was forced to replace several menu items with prepackaged grab-and-go meals, for example.

But that was then.

Now, Dallas ISD’s staffers are getting back to the daily scratch cooking that was the heart of its operation, all while bringing new initiatives to the forefront.

Rosenberger is perhaps most excited about a shelf-stable milk pilot the team rolled out last January across nine elementary schools selected for their demographic diversity. Housed in recyclable juice box-like cartons, the milk is pasteurized at ultra-high temperatures to destroy bacteria and lengthen shelf life.

Shelf-stable milk costs about one-third more than traditional, however, so the team knew they had to weigh benefits against that premium. Fortunately, the results were beyond what the team could have imagined.

A myriad of upsides

The operational benefits were clear early on. The team determined walk-in coolers, some of the most prime real estate in a foodservice setting, could be 10% to 20% smaller. They also theorized that because the shelf-stable milk comes in 27 units per case, nearly half of the 50 in traditional plastic milk crates, it would be easier for staff to move the inventory around without strain.

Instead of daily milk delivery, they could scale back to once a week and reduce interruptions for school security and kitchen staff. Shelf-stable milk also lasts through holiday breaks and broken coolers.

But it was the effect on students’ habits that proved most remarkable. Lunch participation increased 10% across the nine elementary schools piloting the shelf-stable milk, compared to only a 1% rise for the other elementary locations. Plus, milk consumption went up while milk waste went down.

“I've been doing this 30 years, and I'm not sure I can recall any single change I've made that gets basically a 10% increase in participation,” Rosenberger says. “It was just remarkable.”

That type of excitement and newness has fed on itself, he says, giving the staff energy to brainstorm and implement new ideas—like another pilot program kicking off this month.

Dallas ISD installed a fancy new meat smoker at one of the district’s high schools, where students will have their choice of three smoked entrees every Wednesday, says Melinda Hillis, a registered dietitian and the foodservice team’s assistant director for support services. The team will smoke the beef from raw for 18 hours and make use of a housemade dry rub that is salt free. In an October taste test, 86% of students rated the results good to excellent.

“We hit the ground running in the fall in maximizing the amount of pilots,” Hillis says. “Our question coming into the spring, then, is: Which pilots do we extend to other schools? Which initiatives are the students liking—what gets them excited?”

Tapping into that excitement, among both diners and staff, is Rosenberger’s recommendation for other operators looking to re-energize and move forward as the pandemic wears on. And, of course, keep in mind the Dalai Lama’s gentle rebuke about worrying.

“We worry about this, that and other the other, but the uncontrollable is going to happen,” he says. “Worrying about it isn't going to help one iota. Instead, let's take all that energy and put it into things we do have influence over and forge a pathway ahead. If we can get ourselves right, we can get it right when it comes to taking care of our kids.”

See what’s in store for Rosenberger’s operation, which was named FSD’s January Foodservice Operation of the Month.

Ultimately, I think it's our focus on what's best for our students. There's just so many examples of that in this district. We have lots of innovative educational programs—and even though we’re not part of that directly, it shows how our district embraces what’s for the good of our children. So, we as a [foodservice] department try to have that same philosophy: Do whatever it takes to be amazing for our students and contribute to their success. 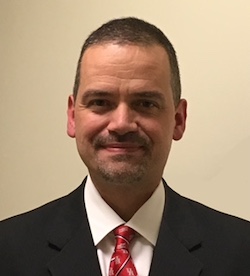 That isn't an end itself, obviously, but as long as we keep that as our big-picture goal, we’re always going to be thinking about how we contribute positively to student achievement. I think that opens the doors to possibility, and I think it opens the doors to excellence.

To be innovative. To be daring. To be there for our students. We have a lot of initiatives along those lines, but one of our most exciting is that we actually took a school bus and converted it into a food truck. We plan to deploy that actively in February, and it's going to be the start of a brand-new division for us [focused on] mobile feeding solutions. We're super excited about that.

Our chefs also have a new initiative: They're going to be in schools every single Friday of the school year conducting taste tests on new recipes at all grade levels. We're going to be reaching our students like we've never reached them before, in that we’re really capturing their likes and dislikes. That will help us do an even better job at building a program that that reflects them. We think we're going to end up closer than ever to our customers, and that's going to enable us to be better than ever for our customers.

Nominate an FSO of the Month
K-12