The designers of the new taproom at the University of New Mexico (UNM) in Albuquerque knew that students, faculty and the community at large would happily pull up a barstool at a spot where everybody knows your name. But first, they had to come up with their own identity. Even though architecture students at UNM were able to come up with a winning design, the space still needed a brand.

“We wanted to give this space an identity that really felt true to the campus, true to the concept and the spirit of how that concept came about,” says architect and UNM School of Architecture professor Chris Beccone.

Beccone was approached by Amanda Gerard, operations manager for UNM’s dining and foodservice department, who came up with the idea of naming the space Drafting Table in homage to the architecture school. Beccone liked the idea, but thought that “drafting” was a little too restrictive to just the architecture school. They decided to shorten the name to Draft & Table to include the rest of the university community.

“If we shortened it to “draft,” it would work for any academic discipline who does a first draft of anything,” Beccone says.

As construction began, Beccone and Gerard worked to develop the brand’s colors and lighting while the team finalized the concept’s beer and food menu.

Beccone and Gerard went through different color palettes and lighting options, looking for colors that would work with the university’s branding and also match the metal details in the space’s design. 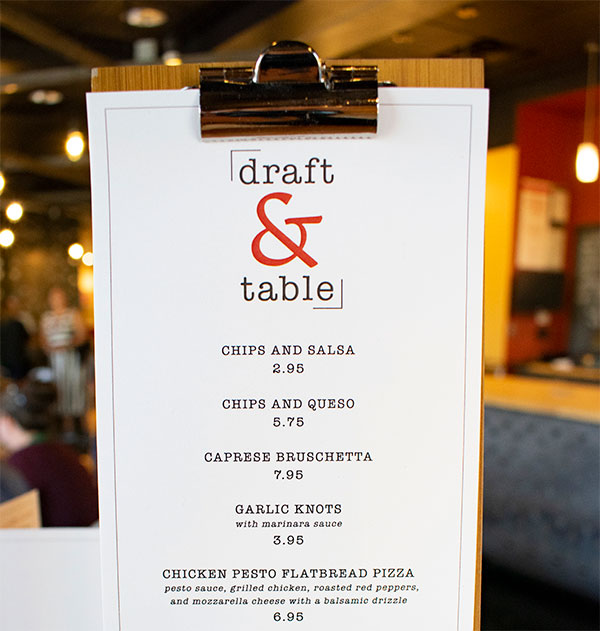 “We wanted these really rich tones that were such a complement to the raw steel design,” Gerard says.

The pair ended up going with a terracotta color that complements Draft & Table’s New Mexican pottery-inspired design along with a neutral color called Mesa, which Gerard says lends “a warm and inviting backdrop to the space.” Both colors are secondary colors in the university’s branding.

“We wanted to give this space an identity that really felt true to the campus, true to the concept and the spirit of how that concept came about.” —Chris Beccone

The lighting in Draft & Table is also warmer compared to the lighting of other spaces on campus.

“Draft & Table is a unique space in the student union building, and we wanted the ambiance to reflect that and have a different aesthetic than the rest of the plaza level,” Gerard says. “Utilizing a warmer light brought a more intimate atmosphere to the space that complements the design and enhances the experience.”

During the construction phase, Gerard and the marketing team also worked on marketing collateral for the new space. Not only would the promotional materials serve as a way to showcase the concept’s brand, but they would also provide contact info for resources such as UNM’s Campus Office of Substance Abuse Prevention and Center on Alcoholism, Substance Abuse and Addictions. This information is likewise available on Draft & Table’s digital signage as well as the taproom’s custom coasters.

“We talked about what each piece of collateral would represent, and for us, the coaster being in front of every guest was just a great opportunity to do our due diligence in making sure they have the information that they need,” Gerard says. “That just felt like the most prevalent place to put it.”

Representing more than 70 breweries throughout the state, the New Mexico Brewers Guild allowed the university to connect with a wide range of local breweries when deciding what beer should be featured on the initial drink menu.

In compliance with New Mexico laws, brewers who wanted to be involved had to be sourced through a licensed distributor or wholesaler. If that requirement was met, Gerard says they were open to working with any local brewer that was interested.

The team settled on 13 beers as well as a nitro cold-brew coffee option for those who don’t want an alcoholic drink. Working with the brewers guild also allowed the university to have access to limited-edition beers. One such beer is currently on draft. Gerard says that the drink menu is not fixed and that the university is “very receptive to adding new breweries, styles and features" in the future.

“We talked about what each piece of collateral would represent. … The coaster being in front of every guest was just a great opportunity to do our due diligence in making sure they have the information that they need.” —Amanda Gerard

At the same time, progress was being made on the food menu.

Not only did the menu have to be accessible to different tastes and dietary restrictions, but it also had to fit well together, Gerard says.

“When you have a menu that doesn’t have a lot of items, it has to have some type of cohesion,” she says. “When we were testing menu items, there were some that were really good, but they just didn’t fit the picture.”

One of the items that didn’t make the initial cut was a poutine topped with green chili. However, Gerard says that like the beer menu, the food options at Draft & Table will rotate.

As for the construction itself, there were few setbacks. Contractors broke ground on the space in July while many students were off campus for break. In the end, construction finished only slightly behind schedule in October 2018.

“Everything went pretty smoothly,” Beccone says. “We had a couple little pieces that we sort of had to stop the construction team and have them do something a little bit differently, but nothing that would be out of the ordinary for a project of that size.”

One of the small setbacks occurred with the tap system. Because Draft & Table is open to students and faculty during non-operating hours, the space has a custom menu board with steel panels that slide to reveal the taps during operating hours. They are locked and closed when the taproom isn’t serving.

“What [that system] did was it moved the taps further away from the counter where the servers stand. In essence, [the taps are] recessed into a thickened wall rather than standing on the countertop, which is what you would normally see,” Beccone says. “At the very last minute, we realized they were too far away, and a normal arm’s length couldn’t reach the taps, so we had to do a quick modification on the cabinetry itself to allow access to the recessed taps.”

Beccone and Gerard credit their internal project management group and a strong relationship with their contractor for being able to tackle each challenge that came up in a quick and efficient way. With the tap system issue, for example, the quick change added only about 30 additional hours of work. The contractors just needed to reduce the width of the backbar’s countertop to allow for easier access to the taps.

“You would never know it now,” Beccone says. “And we all got some pretty great butcher block cutting boards out of it.”