In 2015, two students at the University of New Mexico (UNM) in Albuquerque, Sarah Collins and Gus Pedrotty, were visiting Colorado State University’s campus in Fort Collins. They came upon the school’s on-campus taproom, which showcased local brews. They both thought about the beer scene back in Albuquerque and wondered why UNM didn’t have a taproom of its own.

Their initial idea led to the creation of Draft & Table, UNM’s 2,200-square-foot campus taproom, which acts as both a social and educational space.

“This was the very definition of a grassroots project. This came up from student initiatives. There’s just no other way to put it,” says Chris Beccone, architect and University of New Mexico School of Architecture professor, who would later work with students to help design the space.

From the ground up

As soon as Pedrotty and Collins returned to campus in the fall of 2016, they got right to work. They began by reaching out to students to sign a petition in favor of the project. They also went to different groups on campus such as institutional support services (a part of the school’s administrative branch that works to provide services to the campus community), student groups related to substance abuse issues and domestic violence, campus neighborhood associations, and the campus police to garner their support.

“We went to any place that would hear us and be impacted or perceived to be impacted by the presence of beer on campus,” Pedrotty says.

Aside from the school’s sports arenas and other special campus locations, such as its university club, UNM doesn’t allow alcohol on campus. Pedrotty realized that serving alcohol at Draft & Table wouldn’t require a change in university policy, but rather a change in perception. School officials had to see that the space was going to be “productive to the community.”

“This was the very definition of a grassroots project.” —Chris Beccone

When meeting with different groups, Pedrotty and others argued that it would provide a space for students to drink responsibly on campus—that it would be a place where the UNM community could come together.

“That’s the narrative we drove home,” Pedrotty says. “We took it from a policy perspective, from a cultural perspective, an educational perspective as well as from a community-driven standpoint.”

After Pedrotty and the students got groups—such as the board of regents, the higher board of education and the state board of finance—to sign off on the project, the university’s dining and food services department and its food contractor, Chartwells, decided to split the $650,000 budget for the taproom’s creation.

“It was that educational piece that made it really tangible for the provost office and the academic institution because it was rooted in trying to become a new interdisciplinary space, not only in its final project, but in its creation,” Pedrotty says. 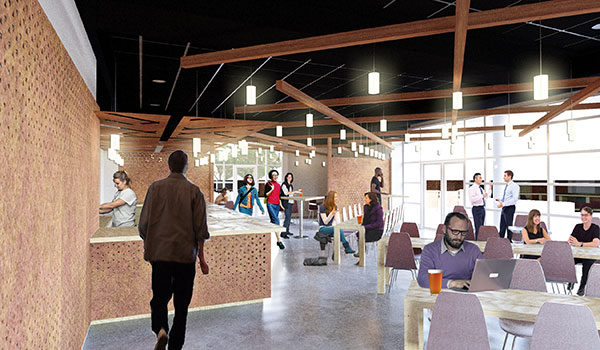 Instead of just using a contractor to design the space, UNM decided to take the process in-house and have students in the university’s School of Architecture work with Beccone to create their own designs, one of which would be chosen and executed. The biggest goal when planning the designs was making sure that Draft & Table would be a welcoming space that would attract members across the UNM community, Beccone says.

“We wanted a signature space,” he says. “We wanted a contemporary, exciting place where the community could come together.”

That theme of community is evident throughout the design. Split into three parts, Draft & Table’s main room houses the tap system and features long communal tables meant to encourage conversation. Just off to the side is the faculty and student lounge, which provides a slightly quieter space for students and faculty to meet; and the final space, also connected to the main room, is the patio where guests looking for some fresh air can sit and enjoy a drink. In total, the taproom can accommodate up to 212 guests.

“We wanted a signature space,” he says. “We wanted a contemporary, exciting place where the community could come together.” —Chris Beccone

Students were tasked with coming up with a design for the space that was inspired by the state and its history. The design includes elements inspired by New Mexican pottery, which can be seen throughout the rooms.

“It’s very abstract,” Beccone says. “It’s not intended to be something that hits you over the head and says, ‘Oh, this is New Mexican pottery.’ It was about playing with that history and trying to create something that was visually appealing.”

While the space is clearly intended for the university community, Pedrotty is quick to include that Draft & Table is also meant to be shared with the Albuquerque community at large. For example, the space is located next to the school’s performing arts center, which hosts local and national performances throughout the year. Draft & Table now offers the performance venue a place to host events before or after productions.

“It’s almost like an increased night life amenity for the Albuquerque community as a whole because of how much that performing arts center means for the city, while still being a student-, faculty- and staff-dominated place during the day,” Pedrotty says.

Creating a menu without a kitchen

Once the school’s dining and food services department was on board with the project, it not only sought advice from different campus stakeholders, but also went outside the university and connected with the New Mexico Brewers Guild.

“We enlisted [the guild’s] help in not only getting some best practices from really great industry partners, but also seeing what the climate was on how people could see themselves being integrated in this business, whether they wanted their product represented or if they wanted to be there in an advisory capacity,” says Amanda Gerard, operations manager for UNM’s dining and foodservices department.

Through the guild’s suggestion, the school decided to have Chartwells responsible for operating the taproom and crafting a diverse list of local brews.

While the local beer on tap is the main star of the concept, the plan does include an accompanying food menu. Finding space for an actual kitchen, however, proved challenging.

“[A kitchen] would have taken the square footage to a different capital investment level because of the precautions we would have needed to put in for fire suppression and some different coding issues,” Gerard says.

A menu is essential for safe service and to create a well-rounded experience for guests, so the team got creative, Gerard says.

Officials decided to build the concept in an empty space that was adjacent to an existing pizza concept in the student union. Because the tap system and hot and cold storage was going to take up most of the back-of-house space at Draft & Table, the team decided to use the kitchen in the pizza concept, as well as the catering kitchen located nearby on the same floor, to supply the menu items.

The team knew from consumer feedback that the dishes had to be affordable, but also accommodate those with dietary restrictions. Those offerings, up to that point, hadn’t been available in the student union.

The theme of community found its way into Draft & Table’s food options as well. Gerard and the team decided to center the menu on shareable dishes such as flatbreads, and chips and hummus.

“That space is really community-centric,” Gerard says. “The community tables and the big gathering spaces really drive people together, and we wanted the menu to be a part of that as well.”

How will the FDA's new sodium guideline impact the menu?