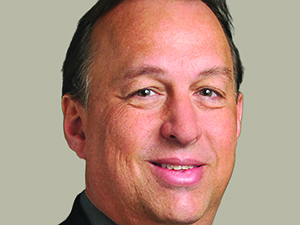 When you’ve been an employee at the same place for more than 30 years, you’re bound to see a lot of change. You leave an impact on the workplace when you are the driving force behind those changes. Such is the case with Randy Lait at North Carolina State University, in Raleigh. In his 30 years with the university, Lait has reorganized the department, transformed retail dining and cut costs while increasing services.

Though he planned to study computer programming, Lait worked his way up the department’s ranks from student employee to dining unit manager and eventually to business manager, discovering the ins and outs as he went. “The foodservice thing just came about as they needed somebody to work and I needed a job,” Lait explains. “I switched my major to economics and I ended up getting two degrees, one in economics and one in business management. And I kept working with dining and then they had a job opening when I finished [school] and I was fortunate enough to be selected for that.”

The retirement of both his boss and his boss’s boss, after each put in their own 30-plus years, opened the door for Lait to step into the director’s role. With that step came reorganization of the department, first on an administrative level with the establishment of a new auxiliary services division and then with the rejuvenation of the hospitality services department. “There was an ambitious new plan to develop new foodservice and to remodel existing foodservice and to really shake things up,” Lait explains. “So it was a great opportunity to take a department and also have a semi-blank canvas for the new operation.”

While Lait felt that he had acquired a number of business skills that would be beneficial to successfully lead the department, “I also felt like I lacked some things,” he admits. “I lacked the true culinary skill and that food knowledge to take things to the next level.” But he knew that you’re only as good as the people you surround yourself with, so he set out to hire people who could fill those gaps. “I knew we wanted to have better food [and a] better customer experience for our campus, so [I] took a group of people who were very hard-working, dedicated people and added to them new folks who were more culinary minded and really started to change how we planned these new operations.”

“Randy’s basically a businessman,” explains Lisa Eberhart, R.D., dietitian for university dining. “He looks at it from a very business [perspective]: are we going to make money, are we going to serve the students, how’s this going to work for us. He really realized that when he took over, ‘OK, I’m a businessman, but I don’t really know food that well,’ and so he’s tried to surround himself with people who knew food, which has been really nice because we’re all really similar in our focus of wanting NC State to be the best.”

With culinary- and nutrition-minded staff on board, Lait focused on planning and developing 16 new campus retail venues, most of which were to be self-branded. Among them, One Earth, focusing on global cuisines; Tuffy’s Diner, a classic diner serving specialties like smoked barbecue and banana pudding; Red Sky Pizza Co., serving housemade New York-style pizza baked in a fire-deck oven; and Los Lobos Mexican Grill, which offers made-to-order tacos, burritos and quesadillas. “We wanted to create venues that were unique to the NC State experience,” Lait says.

Four years in the making, 14 of the 16 new venues opened during the 2013-2014 academic year. “It was a fantastic experience,” Lait says. “But not one that any of us here had a whole lot of previous experience doing. That’s why we’re kind of excited that things worked out and we didn’t set ourselves on fire. We designed the facility, the menu, the recipes, the processes all from scratch and custom contoured our meal plan program to line up well with these new operations. It was really a transformation. I’m really proud of the team for how they’ve come together through what could have been some very trying situations.”

“We committed four and a half years ago to changing the dining culture at NC State,” explains Dan Adams, Ed.D., associate vice chancellor for campus enterprises, the university’s auxiliary division to which hospitality services reports. “And Randy has carried that task forward extremely well. Randy has led us through a complete metamorphosis of how we serve food—the quality of the food, the variety of food, the attention to our international populations. He’s just done a marvelous job in putting together a very solid dining team.”

In order to make the operations of these new retail venues run more efficiently, Lait and his team overhauled the department’s menu planning process and management system—a process that at the time operated within four different systems, allowing for a lot of room for error.

“I discovered something as a business-minded guy,” Lait observes. “And that was if you make a commitment to know what’s in your food and are able to communicate that to your customers, it has to be right. And the process of making it has to be right; the recipes have to be right and the ingredients right. Therefore your costs become right and when your costs are right you can set your pricing right and there’s a positive financial outcome that can be achieved.”

Today, Lait and his team plan and house all menus in the menu management system. With one system, complete with up-to-date ingredient and allergen lists, the team can now access accurate data for menu development, communication and product labeling. That means if one ingredient in a recipe is changed, that information is immediately communicated throughout the system. So the next time a label is printed, up-to-date nutritional and allergen information is included. “The last piece we’re working on is to connect our digital menu boards so that it pulls that data from the menu management system,” Lait says.

Adding culinary staff and streamlining the menu management system has had more impact than Lait and his team initially expected. “There were benefits on the food cost level that helped us a lot,” Lait says. “I think at the end of April [2014], I was up $1.6 million in sales for the year on $225,000 more in food and I think I’m up [about] $5 million over three years in revenues on almost flat food costs.”

Lait and his team have two more venues to open and continue to tweak the new operations to ensure each is operating at its peak as the fall semester begins. “It’s like bringing our picture into focus for these new units that opened up and going back and looking at what our initial plan was and to see how well those things are functioning now that we’re six or eight months into it,” he explains.

But that’s not it for hospitality services at NC State. Next, Lait says, “we’ll turn our attention to the residential program, which was our primary focus for our campus dining and it’s kind of had to take a backseat for two or three years while we did all this retail expansion.

“When I tell people that I’ve worked at the same place [for 30 years], that I lived in the same house for 28 years, that I’m married to the same woman for 30 years, they think that I’m change adverse,” Lait says. “When actually all we’ve gone through here is change, and I’m really proud of how we’re always looking to make things better. I’ve just been fortunate to be here to have opportunities to grow and change. Even though it’s a consistent backdrop, it’s by no means a static experience—here or at home!”