Here, she shares some of her goals for this school year as well as the changes that have been implemented due to COVID-19.

Can you share some of your prior roles within college dining?

I started at the University of Massachusetts, and then I was most recently at Westfield State University, which is also in Massachusetts. So, most of my experience is within self-operated university dining. At Westfield State, I was the manager of nutrition there. So, a similar role to what I have now, but it was a much smaller campus. They had transitioned from a privately operated dining service to self-operated in 2016, and at that point, they hired me as the first dietitian on campus, so that was a very fun rule because I got to sort of make it my own.

I had a lot of nutrition education in that role and was working with the chefs to make healthier menus and sort of adjust accordingly, you know, making the transition from private to self-operated. Before that I was at UMass, and that was still while I was becoming a dietitian. I worked there the whole time that I was a student and the whole time that I was doing my dietetic internship. I worked there for about five years and got to see sort of the behind the scenes with the dietician in that office and got a lot of my base knowledge from UMass Dining.

What are some of your goals for this school year?

First and foremost, which I think is probably the case for everyone within dining here, is the health and safety of our students. So, we're trying to ensure that we are providing the safest possible experience given the COVID situation, but still making it interesting and exciting. I am hoping to still be able to provide a variety of menu options and do it in a way that's safe but still fun.

A lot of my focus over the summer has been reviewing the menus with all the changes in mind and making sure that there are still options for students who are following a gluten-free diet or are vegan—sort of thinking about the menus in terms of all different dietary restrictions, and then still meeting with the students. I've done a lot of virtual meetings to kind of explain the changes that have happened and how they'll be able to still navigate.

We've made a lot of changes. There’s going to be increased mobile ordering and increased social distancing and everything like that, so I think students are definitely going to be nervous. My goal is to kind of to help them not be nervous and understand that we're still dining, we’re still NC State. It'll be a change, but my first goal for this semester is going to be to help them, you know, navigate and understand that we're still here for them.

What is one thing you’ve done in prior dining roles that you want to bring to NC State?

One of the really fun things that I was doing at Westfield State was nutrition education with a hands-on approach. So, I was previously doing a program that I called Lunch with Lauren, and once a week I would focus on a different topic. Students could come and meet with me and talk to me about whatever the topic was that week, and I was really excited to bring that here. 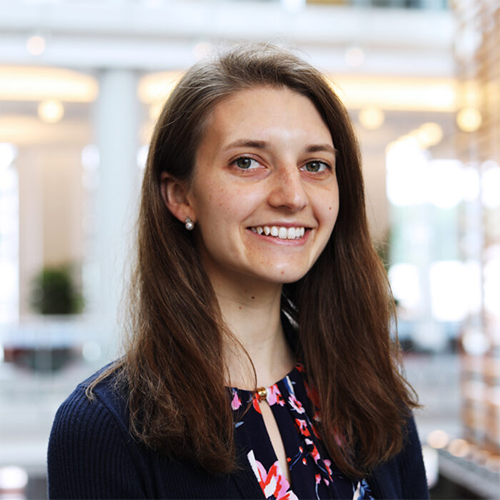 Unfortunately, it's not going to really be a hands-on approach this semester, but I do plan on having some virtual series. So, I've already started doing something called the Well-Fed Wednesdays, and that's just a story feature on Instagram where we are talking about a different topic each week and I think that's a good way to sort of get my name out there.

I want students to be comfortable stopping me in the dining hall and asking questions. I don’t want them to feel like there’s a barrier. That was something that was really useful at Westfield State was [me] being out there all the time to the point that [students] were like, “You're out here again talking about nutrition?” But I want them to easily know my name, know my face and check me out.

I know it'll be a little bit different because we're such a huge university, but I'm hoping if I can kind of mix it up and do education in the different dining halls and go to all the locations for capturing the largest group of students. That would be really my favorite thing that I bring from my previous experience.

What are some examples of past nutrition topics you’ve done?

A really popular one has always been focusing on relaxing before finals. So, I would [showcase] some healthy ways to relax, and we would do a build-your-own tea blend. … Another really simple one, but always mind blowing, was the Rethink Your Drink activity. I would do it a lot of times with Dunkin’ Donuts drinks because there was always a Dunkin’ Donuts on campus, and I would show the amount of sugar in different beverages. A lot of times, students would walk by holding that drink and then they would sort of stop and ask what it was all about.

I also like to focus on food holiday[s] coming up. So, at the beginning of July, I did a post here at NC State about banana ice cream, which was to celebrate National Ice Cream Day. So, if I can't think of anything, I'll try to look up the food calendar and see what's coming up and kind of make it focused on nutrition.

What are some tips you would give to fellow college dining programs on how to handle this school year?

Now more than ever, I think it’s going to be really important to focus on student feedback and implementing that as soon as possible. I think students are going to be really cautious, and we need to be aware of that and be listening to what they're saying and figure out how we can make it as comfortable as possible for them. It's going to be a really hard year for many reasons. We want dining to still be an enjoyable experience.

I think the biggest thing, in addition to all the safety precautions, is just being open to feedback and being extra aware that everyone is on edge. I think that's going to be most effective and then continue looking at your menus to keep them exciting. Another thing that might get kind of lost in the shuffle is that we're trying to increase efficiency, but we don't want the menus to get stagnant. So, it's kind of a fine balance between do we still have enough options that are fun and exciting to make the students enjoy coming to eat.