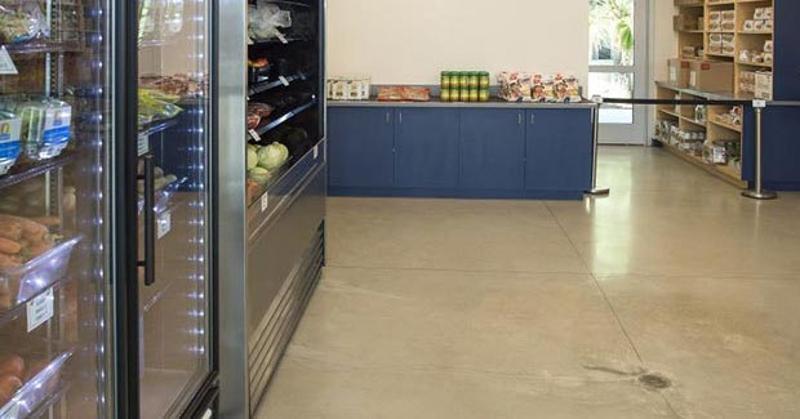 “Food insecurity is definitely a nationwide issue,” says Jill Horst, executive director of campus dining at the University of California Santa Barbara (UCSB). “As tuition increases, cost of living increases; we’ve just seen more and more students struggling to get healthy options of food in their belly and really battling the trade-offs: ‘Do I buy books or do I buy food? Do I rent an apartment or do I couch surf?’”

At least a handful of years ago, Horst was approached by a student group seeking to feed the homeless around Santa Barbara. Her partnership with them began as a pilot through which students could donate meal swipes toward bulk food purchases that would later be handed out in local parks. That program has since turned inward, homing in on the campus community rather than the community at large.

“I really wanted it to focus on campus, because there are students sitting right next to them in class that are struggling just like somebody else out on the street,” Horst says, “[wondering] where they’re going to get their next meal, how they’re going to pay for the supplies that they need in order to live a normal life.”

Today, the revamped initiative, dubbed Swipes for Us, converts donated meal swipes into food vouchers students can pick up at the Associated Students Food Bank on campus. The initiative collects about 1,000 swipes a quarter, she says.

As of last fall, UCSB students experiencing food insecurity gained access to some new resources. For starters, The Arbor, the campus’ largest c-store, began accepting payments made with Supplemental Nutrition Assistance Program (SNAP) benefits. The school also debuted Miramar Food Pantry, which addresses the needs of students living outside central campus. Its focus is on fresh foods in addition to shelf-stable ones.

“So people talk about [food insecurity] all the time, which is great. Because it used to be, you know, hiding in the dark. Nobody really wanted to admit that they were having financial problems or food insecurity problems or even just housing problems.” —Jill Horst

Miramar, which opened on Oct. 1, 2018, was developed to serve residents in a newer area of campus that is home to transfer students, grad students and their families, and college freshman.

In the beginning, the new pantry was “a big unknown for us,” Horst says. The team didn’t know how many people would be coming in, what the take rate would be, or even what items would be the right ones to stock, she says. The pantry—which is open three hours a day, three days a week—sees about 90 to 100 customers daily, up to a quarter of whom are picking up food for their families.

Miramar’s customers—undergrad or graduate students who self-declare that their annual income falls below $14,484—have access to many building blocks of meals, a key piece of the pantry’s philosophy.

That includes perishable foods such as eggs, dairy, bananas, broccoli and avocados. These items are the same quality as those being served in the dining commons or at campus retail, Horst says, something they’ve been able to achieve at a reasonable cost due to UCSB’s purchasing power. Miramar is fully funded by Residential Dining within Housing, Dining and Auxiliary Enterprises at the university.

“We want to have the same standards we would anywhere else.”

Another facet that’s become important: making Miramar a peer-to-peer resource. At first, it was “all hands on deck,” Horst says, with her team’s dietitian and associate director putting in hours there. But now, five student staffers do everything from opening the doors to helping customers and shelving deliveries.

Overall, feedback has been positive, and foot traffic is on the rise from the first quarter, likely due to word of mouth: “If we have to expand our hours or our days of operating, we’re going to do that,” Horst says.

“The payoff is so rewarding,” she says. “And knowing that you’re helping a student in need to be able to put some nutritious food in their bodies so they can be successful in the classroom, that’s what it’s all about.”