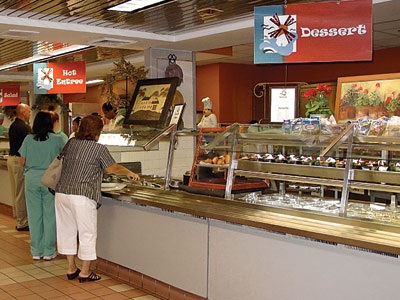 With a “can-do” attitude that starts at the top, the foodservice staff at 623-bed Saint Luke’s Hospital in Kansas City, Mo., has proven that no matter how old and inadequate the venue, high quality service can be provided—and customers will respond to it.

The dramatic changes that are in evidence today, especially on the retail side of operations, began with incremental steps taken following the arrival in 2003 of Howard Turley and Amy Miller. Turley, now vice president of hospitality, came to Saint Luke’s as director of nutrition services with solid credentials earned in hotel operations; soon he was promoted to director of hospitality and, more recently, was named vice president of that department.

Meanwhile, Miller originally joined the foodservice team as information services manager, tasked with bringing both the cash register system and menu management into the 21st century. With a master’s degree in computer management information systems to her credit, as well as experience in correctional foodservice (she served with Aramark at Lansing Correctional Facility, Lansing, Kan.), Miller was named to director of nutrition services in December 2006.

Turley and Miller came on board with a mission: redesign services at the 125-year-old hospital, the largest in Saint Luke’s Health System, an affiliation of 11 hospitals and other healthcare services in Kansas City’s metro area and beyond. Although the nutrition services department at Saint Luke’s expects to relocate to a “new Saint Luke’s” in the spring of 2010, service at its longtime home is what still counts most today.

How has the department of 87 full and part time employees, including clinical dietitians and diet techs, managed to serve more than 50% more customers today—now approximately 2,600—than it did less than four years ago, and increase revenues by 73% (even with an almost 15% food cost increase)—all in the same tight quarters?

According to Turley, a lot does have to do with appearance—the welcoming faces of foodservice staffers—plus a coat of paint on the walls and seasonal decorations in the cafeteria and servery area to create a more upbeat, modern ambiance. 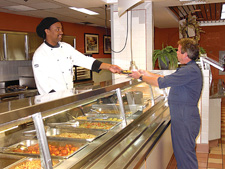 Relating: “When I came here as director of nutrition, then hospitality, we were aiming to deliver hospitality services,” Turley recalls. “We partnered with a company, Working Solutions, to help us put together a training program. For a year and a half we trained everyone, including environmental services, patient transportation, etc.” Turley can cite an enviable staff retention rate of 80% to 81% since he arrived. “I’m most pleased with the change in service.”

Miller concurs that the first focus was—and remains—customer service. And, using a football analogy, he says the “huddle” is the paramount way to generate enthusiasm, team spirit and possibly germinate new ideas.

“Monday through Friday, for about three to five minutes starting at 10 a.m., we huddle with production and cafeteria staff, plus some of the dietitians,” Miller explains. “We talk about smiling, greeting customers and anticipating their needs. Each topic is the focus for the week. Sometimes employees suggest topics for future discussions.”
For ongoing reference, a Nutrition Services Huddle Card is also given to each staff member. The cards are printed with the mission statement—to focus on high-quality food—and on the back of the card are some parameters of good customer service, including: smile, look up and greet all customers, listen to customer concerns, be respectful, have a can-do attitude and never say “no.”

“We receive compliments almost on a daily basis and we’re serving about 50% more customers today,” Miller notes proudly. “Our check average in 2003 was $2.50 but now we’re on target for $3.00. We don’t offer an employee discount because our pricing is very economical; we don’t want to gouge a patient or visitor here—we don’t want to ‘punish’ people because they’re here—and we hope they’ll enjoy themselves.”

Surveying the scene: For the past four years, the results of customer opinion surveys have driven menu changes in the 220-seat Mill Creek Cafe. “The first year we did the survey, in 2004, we got back about 500 responses. We learned that customers thought the menus were boring and they wanted more fresh vegetables, fruit and snack items,” Miller points out. “So we went to scratch cooking for most of our entrees—also for patient meals—and we hired an executive sous chef to work with the executive chef who came on in October 2003.”

More recently, the department has implemented Smart Selections, menuing one or two healthier-for-you entrees that pack less than 500 calories, less than 15 grams of fat, and less than 800 milligrams of sodium. Two to four side dishes in the daily program contain fewer than 150 calories, five grams of fat and 300 milligrams of sodium. These items, rotated through on a three-week cycle menu, are indicated with a star with a smile on the face; menus are posted on the hospital’s Intranet or on a paper copy available at each cash register.

Last May, Miller introduced a Smart Selection punch card, allowing customers who purchase nine meals over an unspecified time period to get the 10th Smart Selection meal free. “The menu board at the entrance lists each of these items with a star and there’s a sign at each counter indicating the ‘star’ items,” she says. “Customers can pay by cash, check or payroll deduction—and they can get another Smart Card anytime if they don’t have it.”

Speeding up breakfast: Realizing that speed of service is also an important parameter to be met in satisfying customers, early on Miller’s team implemented a self-service breakfast bar to reduce the time spent waiting at the grill. Even with two people serving the line, it typically takes about 15 minutes for a customer to get an omelet with all the fixings. But, at the self-service bar in the Mill Creek Café, they can grab-and-go made-from-scratch—but prepared ahead—scrambled eggs, bacon, pork and turkey sausage, biscuits and gravy, as well as assorted pastries and muffins. There also are once-a-week rotations of specialty items such as country-fried steak, or perhaps a chef’s special such as Eggs Benedict. Now, approximately 600 to 650 customers frequent the self-serve bar each morning.

For these special celebrations, Turley is also in his element. “We have a lot of fun. We really consider ourselves the ambassadors of fun. Of course, we interact with customers daily—we require leadership to be out there in the servery and in the dining room—but for a theme day, we’ll be out there participating, and for Mardi Gras, we’ll be passing out the beads.”

Sprucing up: The second prong of the effort to de-institutionalize the atmosphere came this May when the department received almost $6,000 in funding for decorations and painting. “We’re not able to remodel, but we painted the dining room area and the hallway with a combo of upbeat colors. We were also able to get new signage for our dessert, hot line, self-serve breakfast bar, salad bar and grill area,” Miller says.

Next month, as has been the case during the past several years, National Nutrition Month will be celebrated for a whole week at Saint Luke’s—and the foodservice staff will be saluted for its many ongoing efforts. “We’re limited in our ability to provide monetary rewards that we can give our employees—although we do nominate them for Great Service and Employee of the Month awards that are hospital-wide; we also give out certificates of recognition, and we recognize them in our huddles,” Miller says. “Then, during October, the management team will do a buffet for the rest of the staff.” As Turley quickly points out: “In all my hotel career, I only ran into this a couple of times—it’s an amazing team.”