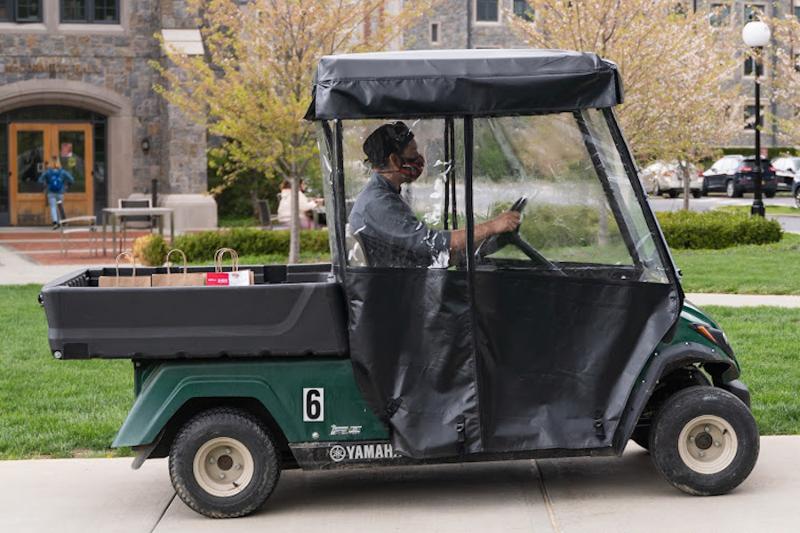 Though robot delivery has been a COVID-era solution on some campuses, the dining team at Marist College is seeing success with a more analog alternative to dine-in: delivery via golf cart.

Marist Dining closed a handful of locations this school year, such as concessions and a gym cafe, but otherwise “tried our best to … keep it as close as possible to what [students] would have recognized prepandemic,” says Kate Cole, field marketing specialist for Sodexo at the Poughkeepsie, N.Y., college.

The biggest change, she says, was the addition of mobile ordering, which the team had been looking to add eventually but was forced to adopt earlier than planned due to the pandemic.

And then, there was delivery.

Marist’s dining hall normally serves about 4,000 meals a day, a number that’s been close to halved during COVID. Yet “there’s still plenty of students on campus,” Cole says, a result of the school offering hybrid learning.

Since its debut in the fall, delivery has been a runaway success, she says, and now accounts for approximately 20% of the school’s mobile food orders, somewhere in the ballpark of 400 daily.

The delivery service operates between 4 and 8:30 p.m. and is free to students, who can pay for their orders with meal swipes or declining balance dollars. Students place their orders through Grubhub for pickup in one of five designated areas throughout campus.

These pickup zones are located in “swipe access public spaces” such as laundry rooms or lobbies, Cole says.

The full menu is available from the school’s North End Dining, The Marketplace and The Cabaret retail locations, save for sushi, smoothies and acai, while the dining hall, which delivers to first-year students only, has a special delivery menu.

Quesadillas, chicken tenders, grilled cheese and the school’s Chicken Bacon Ranch Wrap are among the most popular items ordered.

Though “nothing in the pandemic has been seamless,” the dining team’s general manager and retail manager helped work out the kinks in the delivery initiative, Cole says.

At the program’s outset, deliveries were conducted on bikes, but as its popularity grew, the team switched to golf carts—starting with two that were already on campus, then adding four more. “When we started, we weren’t sure how it was going to go, so we didn’t initially make an investment into a lot of golf carts,” Cole says.

As time went on, they reduced the number of pickup areas to streamline service and found that delivery drivers needed extra battery packs for their phones, which can run out of juice quickly when being used to frequently update the status of orders. (These employees are also required to have a valid driver’s license.)

Despite some bumps in the road, “we’ve found what works and what doesn’t,” says Cole, noting that the plan is for delivery to remain part of the mix even as more normal operations resume.

“It’s been really, really good for the students,” she says, “so I think that we are going to keep it.”