Last summer, the Chartwells dining team at Northwestern University in Evanston, Ill., wanted to expand its farm-to-school initiatives. Its goal: to partner with local farms that placed an emphasis on hiring women and minorities.

Their search led them to Garfield Produce, an urban indoor farm in Chicago that uses hydroponics to grow microgreens.

“We went and actually visited the site of production and met with the owners, and from that day, we knew it would just be a great partnership that we wanted to bring to the campus,” says Chartwells Marketing Director Georgene Sardis.

In the beginning, the main concern was inundating Garfield with supply demands, Sardis says.

“They were still very new and small business-minded, but after discussing and kind of sending out the expectations we had, we decided to work into the partnership and bring in the products gradually,” she says.

When it was planning procurement logistics, the dining team strategically adjusted orders depending on which group on campus would be using the microgreens for that week.

“If we knew catering was going to utilize the product for very large events, for example, we would scale down the order amount within our residential dining locations,” Sardis says. “So that way, we were still bringing in this great local product, but we weren't overwhelming Garfield.”

Over the past year, Garfield has grown to accommodate Northwestern and other local eateries. The indoor farm has added another hydroponic tower as well as additional workers. Northwestern Dining now sources everything from cilantro to basil and has also put in requests for specialized product.

“We can go to them and ask them for a particular blend, and if they don't have it available, they're always willing to see if they can try and grow it and then offer it to us,” Sardis says.

Ingredients before the menu

With more than 30,000 students, the dining team (run by Aramark) at the University of Kentucky in Lexington, Ky., has to plan with farmers far in advance to make sure they can supply enough produce to fill campus eateries.

As part of its farm-to-school initiative, the team decided to concentrate on the one part of the dining hall that needs fresh produce all year.

“We focus on the salad bar because that amount doesn't really fluctuate throughout the year,” says Aramark Sustainability ManagerCarolyn Gahn. “We can pick six ingredients Kentucky farmers can grow, and then have an automatic order each week out of the year.” 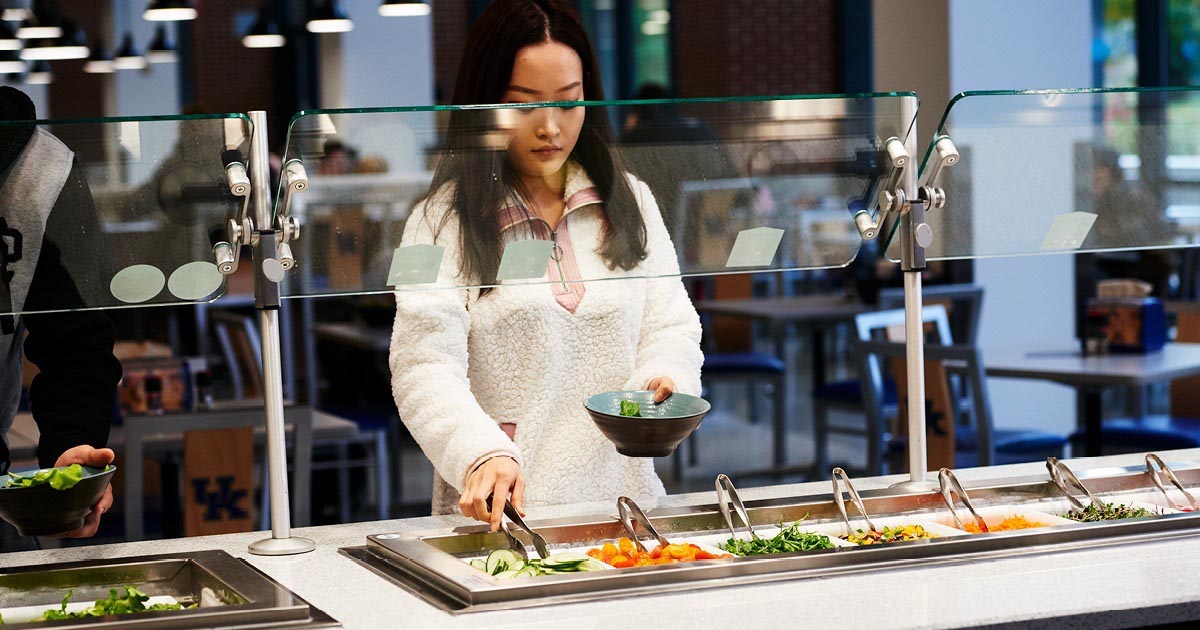 Photograph courtesy of University of Kentucky Farm to School

A second component of the university’s farm-to-school initiative is its Marksbury Farm Whole Animal Program, which supplies UK Dining with whole cows and pigs.

“We wanted to purchase the whole animal because being a really large customer, it doesn't make sense for us to buy only one or two different cuts,” Gahn says. “That really would cut farmers out with the rest of the inventory of the cut.”

Once the meat has been processed, it is delivered to the university in separate boxes depending on how it will be prepared, such as a roasting box or a smoking box.

The dining team takes an “ingredient-first” approach and bases the menu around what is delivered, says Pulkit Vigg, Aramark resident district manager for UK Dining. Beef shanks, for example, often end up as osso bucco, while premier cuts of meat, such as fillets, are often reserved for the catering team.

UK Dining’s farm-to-school program has spread to other dining operations around campus. The school’s baseball stadium has started incorporating local ingredients into its menu items, and there are plans to expand to the football stadium as well.

While Vigg says “It takes a village” to help develop menus and procure product, it’s more about creating a partnership that is beneficial to everyone.

Farm-fresh produce also finds its way to lunch trays at Hernando County School District in Brooksville, Fla. The district began working with farmers to procure local fruit this school year as a result of a $40,000 farm-to-school grant they received from the state.

Working with the farmers and making sure they are able to receive enough fresh produce for more than 20 schools “is a delicate dance,” says Lori Drenth, the district’s director of food and nutrition services.

To make sure they have enough produce all year, Drenth uses her distributors to supplement what she gets locally when needed.

Drenth and her team are also trying to streamline the procurement process to make future orders easier.

“We put together a bid, and it’s basically our first stab at it,” she says. “We're making a pool of local farmers and they're going to give us … their yearly harvest—what they planted and when they are planning for it to be ready for harvesting—and then we're putting out price solicitations once a month for those things that we see.”

And Drenth hopes to continue to expand the program. She recently connected with someone who owns a meat co-op and is looking to bring fresh beef to the district. While she doesn’t quite know where that connection will lead, she says it’s important for operators to reach out to everyone because you never know who will be able to help.

“You just have to start having a conversation and say, ‘What could this be?’ ‘What would that look like?’ It can be done, other school districts are doing it,” she says. “So how do we do that here?”