Foodservice operators want a lot of things in their kitchens—but with food-borne illness recently top-of-mind, there’s one clear choice.

For some operators, it might be a new multipurpose oven that uses several types of heat and cooks, for example, meat and vegetables at the same time.

For others, equipment pieces that use less energy or reduce water consumption (or both) might whet their appetites. 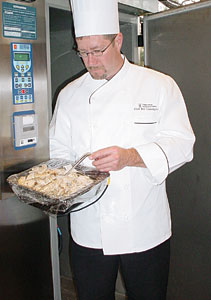 But far and away, the No.1 item topping the collective foodservice equipment “wish list” of a number of foodservice operators and industry experts is: anything that prevents a food-borne illness outbreak.

Given recent e-coli headlines, Char Norton, vice president for foodservice consultant Romano Gatland and a long-time healthcare and military foodservice operator, sees irradiation as the solution to the problem and wishes that such procedures would be taken sooner than later.

“The organic purist doesn’t want irradiation to happen,” she admits. “But I say, if it’s going to kill e-coli and salmonella, do it. We irradiate spices and tea. For years we thought it was protein—meat, eggs, etc.—that was of concern. Now, it’s fruits and vegetables.”

On-site irradiation: In total agreement, Walter Thurhofer, food and nutrition services director for the University of Washington Medical Center in Seattle, is also well aware that “this may be controversial with folks.”

Nevertheless, he would like to see affordable irradiation equipment, sized for on-site use. “It appears to me that the safety risks are minimal and the benefits considerable,” he contends. “There’s also evidence of better quality in that product will hold up nicer much longer.”

Thurhofer’s list includes two additional food safety-related wishes. “Now, we have infrared temperature scanners that will tell you surface temperature,” he states. “I would like equipment to be able to tell me internal temperature without having to probe.”

This would be a quicker and safer method, he suggests, since each time the unit is inserted there’s the risk of bacterial contamination from the probe itself. In addition, cleaning the probe before each use takes time and labor.

Produce scanner: A machine that can scan raw food—especially produce—for bacterial contamination is next on Thurnhofer’s list. “That way, I’d know the food coming in is safe,” he explains. “Right now, I have no way to know. If it’s contaminated and even if we handle it correctly, we’re still liable.”

Similarly, Norton suggests what she calls a “farm-to-fork piece of equipment” that she’s sure everyone would want. “How can we detect the presence of any one of the more than 250 types of microorganisms that could cause food-borne illness? A tester could be as inexpensive as a pocket thermometer.”

Chill in: Although blast chillers are not new to the marketplace, Norton knows they continue to top the wish lists of operators in all sectors who don’t yet have them. “With all the problems we’re having with e-coli,” she says, “they want to make sure that if an item is potentially dangerous, they can chill it down rapidly.”

At 866-bed Presbyterian Hospital of Dallas, Neal Lavender, director of food and nutrition services, has one blast chiller in the ingredient control room and—because it recently topped his wish list again—another state-of-the-art unit will be coming his way to be installed in a new kitchen in 2009.

“A lot of smaller operations don’t go for them because they’re expensive,” Lavender points out. “But, from a food safety perspective, they’re key when you’re dealing with a large quantity of food that has to be cooled rapidly.”
Lavender also has a temperature monitoring system in one refrigeration system in a storage area. “If the system goes down, it will call you,” he says. “We’re designing it for our new kitchen.”

Rain of cold: To keep hot food hot, heat lamps are fairly standard in the cafeteria setting today. But Bill Eaton, principal of Cini-Little Intl., based in Germantown, MD, would like someone to devise a cold lamp—to keep cold food cold, of course.

He envisions it as looking just like a hot lamp but with a cold cathode light. “Cold would descend on the food beneath it,” he muses. “It would take the place of struggling to get any open display food into an air screen unit, or sinking it beneath ice in a pan. This way, we could ‘rain’ cold on the product.”

Wishes for food safety equipment dominate the list, but items that could potentially help an operation meet its sustainability goals are also substantial.

John Turenne, president of Sustainable Food Systems, wishes that facilities that would like to process fresh, whole, locally grown items rather than buying them prepped and packaged, could each have a commercial food processor. “It would be a tremendous labor saver when buying directly from the farmer,” he says.

Environmental impact: As a member of The Kitchen Innovation panel for the National Restaurant Association, Eaton of Cini-Little has had the opportunity to preview many new pieces of equipment that are related to sustainable development. One example is a warewasher that reduces water use by one-third—sometimes from 350 gals. per hour to 140 gals.

“These have an enormous impact on both energy and water consumption,” Eaton says. “The key word out there is LEED certification [Leadership in Energy and Environmental Design Green Building Rating System]. Today, customers want their companies—and their buildings—to be environmentally aware and the industry is responding.”

Joe Mullineaux, associate director of foodservice at the University of Maryland-College Park, filled at least one equipment need on his own. He created a shield that was welded to a grill and keeps vegan foods separated from others. Beyond that, he has four distinct items on his foodservice equipment wish list for 2007.

“For self-service areas, tongs and other servers made of an antimicrobial material.

Vegetarian-only utensils that would sound an alarm if they were to come in contact with non-vegetarian items.
A safe, self-service, easy-to-use wok that we could let students use themselves. Self-cleaning would also be a nice feature.

Something that would creatively, attractively and automatically package grab-and-go items, both hot and cold.
With 50,000 folks on campus daily, I would buy all of the [items] above tomorrow.”